One of Washington's giants has passed away. 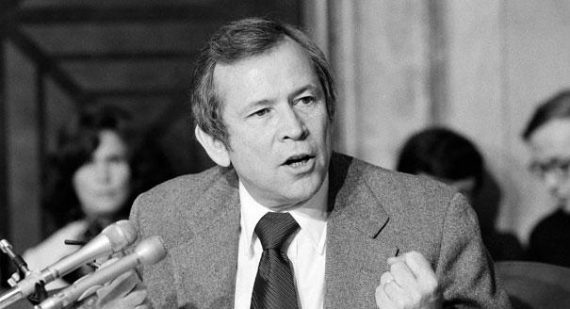 Howard Baker, who represented Tennessee in the Senate and rose to Majority Leader when the GOP took control of the Senate in the Election of 1980 and later became Chief of Staff to President Ronald Reagan has died at the age of 88:

Former senator Howard H. Baker Jr. of Tennessee, who framed the central question of the Watergate scandal when he asked “what did the president know and when did he know it?” and framed portraits of history with his ever-present camera while Senate majority leader and White House chief of staff, died June 26 at his home in Huntsville, Tenn. He was 88.

The cause was complications from a stroke, said longtime aide Tom Griscom.

Mr. Baker, who played a central role across two decades of Republican politics, wryly noted that photography ”may be the only place where I can reasonably aspire to perfection.”

In the Senate, he served as a bridge between decades of bipartisan comity and the acrimony that has prevailed since the 1980s. At the White House, he was the ballast of sound ethics that helped steady Ronald Reagan’s foundering presidency after the Iran-Contra scandal came to light.

The talent for compromise that propelled him to the leadership of the Senate was the undoing of his ultimate ambition — his own presidency — as his party shifted rightward and demanded strict adherence to conservative orthodoxy from its candidates for the White House.

His tenure as majority leader coincided with Reagan’s first term, from 1981 to 1985, and Reagan said the White House program of tax cuts — which Mr. Baker skeptically called “a riverboat gamble” — would not have been enacted without him.

He was, said former Secretary of State James A. Baker III, to whom he was not related, “the quintessential mediator, negotiator and moderator.”

Mr. Baker, who served in the Senate from 1967 to 1985, was a politician as much by Republican pedigree and marriage as by election.

His father served as a member of the House of Representatives from Tennessee. His father-in-law was Everett McKinley Dirksen, an Illinois Republican and Senate minority leader.

Three years after his first wife, the former Joy Dirksen, died of cancer in 1993, Mr. Baker married Nancy Landon Kassebaum, who was about to retire from the Senate after three terms representing Kansas. Her father was Alfred M. Landon, the former governor of Kansas who, as the Republican presidential nominee in 1936, suffered one of the largest electoral defeats of all time.

Mr. Baker was the first popularly elected Republican senator from Tennessee, cultivating a moderate image despite an often conservative voting record. He shuffled about, rumpled and snapping away with his Leica whether in Senate committee meetings or the White House Cabinet Room.

When he was named vice chairman of the Senate Select Committee on Presidential Campaign Activities — the Senate Watergate Committee formed to investigate the 1972 break-in at Democratic National Committee headquarters in the Watergate office building — Republicans were confident that the second-term southerner and trial lawyer with the boyish look and aw-shucks manner would defend the White House. His 1972 campaign literature described him as a “close friend and trusted advisor of our President, Richard M. Nixon.”

Indeed, when he asked the question for which he became famous, Mr. Baker intended to distance Nixon from the scandal.

But what the president knew and when he knew it became the focus of the investigation of the seven-member panel during the summer of 1973 and of the Watergate special prosecutor, and led to Nixon’s resignation a year later.

“The fact he acted as impartially as he did is one of the high points of his career,” said Rutgers University political scientist Ross Baker, who is not related to the former senator, speaking of the senator’s conduct on the panel.

Mr. Baker said 25 years after Nixon’s resignation that during the televised hearings, he was so “tightly focused on trying to find out what really happened” that he was unable to understand the ultimate meaning of the break-in, the cover-up, the investigation and the resignation.

Given the role that Baker played in the Watergate hearings, it was ironic that he ended up rising to the height of Washington power when he took on the job of Chief of Staff who was also under fire as the result of a scandal that had the question of what the President knew at its center:

Reagan was reeling from the Iran-Contra scandal, in which missiles were sold to Iran in violation of a congressional embargo and some of the proceeds were diverted to support the insurgent Contras seeking to overthrow Nicaragua’s leftist government.

The president turned to Mr. Baker in February 1987. Retired two years from the Senate and making a handsome living as a private lawyer — $1.5 million a year with the Vinson & Elkins firm, by one account — he returned to government as White House chief of staff, recognizing he was ending any chance to run for president in 1988.

Mr. Baker was on a family holiday in southern Florida when Reagan called. Joy Baker told the president her husband and grandchildren were visiting the local zoo, Griscom said.

“Do I have a zoo for him,” Reagan replied.

Before signing on, Mr. Baker found himself, again, asking: What did the president know, and when did he know it?

This time he sought the answer in private with the president, satisfying himself Reagan was innocent of any subterfuge in the affair.

The team Mr. Baker brought to the White House provided an immediate lift. They put together a penitential presidential speech, reassured the Senate that one of its own was at the president’s side and abandoned the promotion of then-CIA deputy director Robert M. Gates to be director of the agency because the nomination attracted further questions about the Iran-Contra affair.

The result: Reagan’s plunging approval rating began a steady climb throughout the remaining two years of his second term.

Accepting the job, Mr. Baker worried about moving from the Senate to a staff position. He told Kenneth M. Duberstein, who became Reagan’s deputy chief of staff and succeeded Mr. Baker during the president’s final year in office, “I’ve never managed anything before in my life. I’ve only been a U.S. senator.”

Six months into the job, he said in an interview with David Eisenhower, an author and grandson of the former President Dwight D. Eisenhower, that Reagan knew he was not getting a traditional nuts-and-bolts chief of staff when he replaced the previous staff chief, Donald T. Regan.

“The president knew me, knew what I looked like, knew that I had expertise on a wide range of issues and would give him the benefit of my opinions,” he said in the interview, which was published in the New York Times.

Just days into the job, Mr. Baker discovered one of its unspoken challenges: Dealing with the first lady. He considered quitting after an altercation with Nancy Reagan. She had sent word she wanted a certain staffer fired but then blew up at Mr. Baker when he let others know the orders came from her and not the president.

“Tommy, I didn’t come here for that. She is the one who wanted him fired . . . I’m not going to put up with that,” Griscom said Mr. Baker complained to him, before being persuaded that his quitting would undercut the remaining two years of the president’s tenure.

Mr. Baker was fond of an expression he said he learned from his father: “You always leave yourself a back door, a side door or a trap door.” It meant, Griscom said, “you don’t talk in absolutes. You don’t want to get yourself boxed in where you can’t maneuver.”

Like other Senators that he served with such as Bob Dole and Alan Simpson, and his second wife Nancy Kassenbaum, Baker was part of a breed of Republicans that you don’t see much anymore. Today, they’d be denounced as “RINOs” or some such term, notwithstanding they fact that they were all solidly conservative and loyal Republicans. Baker, however, understood that working across the aisle was essential to political success in Washington and he didn’t view people as enemies merely because they were Democrats. In many ways, that prepared him well for the brief time that he served as Reagan’s Chief of Staff given that the President was now dealing with a Democratic Senate along with a Democratic House and, throughout the summer of 1987, had to deal with investigations into the Iran-Contra scandal that, handled improperly, could have led to real political trouble for the Reagan Administration. Instead, thanks in no small part to Baker’s political skills, the President was able to survive the scandal and the last two years of his Presidency included many successes on the foreign policy front.

We could use more Howard Baker’s in the Senate, because the crowd we have right now isn’t really doing a very good job.