At what point does the legitimate right to demonstrate cross the line into infringing on the rights of others? 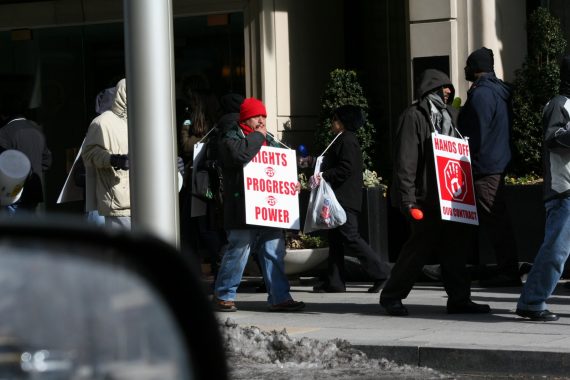 Today’s Supreme Court decision finding that the Westboro Baptish Church funeral protests are free speech, which I reluctantly agree with, brings to mind a related issue I’ve been meaning to post about for a while:  When does the legitimate right to demonstrate become a disturbance of the peace?

A few hundred feet from my office, former employees of the Madison Hotel are on strike. They have been, for more than a month now.

I don’t have management’s side on this one but the charges from labor are pretty damning:

The Madison Hotel is one of those iconic Washington DC spots. Just a few blocks from the White House, it hosts frequent events and conferences, especially for unions, because for decades, the Madison treated its workers well. They always honored their long standing contract with Unite Here local 25, the union that represents 150 workers at the Madison.

But all that changed abruptly when Jamestown Properties purchased the hotel (for a cool $123 million) and brought on property management company Destination Hotels and Resorts.

For the workers, it hasn’t been a smooth transition. The new owners introduced themselves to the workers by forcing them to reapply for their jobs. Many of the workers at the Madison have held these jobs for years and were none too happy with the prospect of being unemployed for no good reason.

While applying for your own job is bad enough, the new owners followed this up by announcing that they would no longer honor the longstanding labor contract the hotel has had with its workers. This contract determines wages, benefits, acceptable treatment and more.

Understandably upset by such changes, the workers at the Madison have gone on strike. They are promising to fight for their contract, and say they’ll stay on strike as long as it takes.

Jorge Fernandez has worked at Palette, the Madison’s popular restaurant, for 7 years. His experience with the new owners exemplifies how tough the transition has been on workers: “We showed up at work last week and the restaurant was closed,” he explained. “They said we could apply for other positions at the hotel but jobs are scarce right now. I have a family, kids in school to support; we had no warning that we’d lose our jobs.”

Assuming that’s all true, it’s no way to treat people. I don’t know anything about the Madison’s books, so, even though it’s a posh hotel that seems to my casual eye to be doing well, they might have no real choice but to cut back on labor costs. But doing it this way is despicable.

Further, unlike most strikes in DC, I gather than the actual employees are doing the striking. The standard practice in these parts is for professional demonstrators–often, amusingly, working for far less than union scale–to do the picketing. (“The Daily Show” did an amusing feature on this a while back; it’s apparently not just a DC phenomenon.)

That’s a very long setup for this: The strikers at the Madison, like the paid strikers in question, are extremely loud.

In the case of the Madison strikers, they’re using bullhorns and other amplification devices. Most of the paid strikers use drums, instead. In both cases, though, the sound reverberates for blocks.

I can’t hear the people during the day, because I’m on the other side of the building. But colleagues can. On the 11th floor, half a block away.

And strikers are ubiquitous in close proximity to my offices. Hardly a month goes by when someone’s not protesting something within earshot.

Now, obviously, they have a right to demonstrate. It’s a time-honored technique of protesters to both draw attention to their cause and drive away business from the firm under target by the mere presence of picketers.

But, surely, there should be limits.

It’s bad enough that unsuspecting hotel guests who booked at the Madison totally unaware of any labor dispute have their stay disturbed, both with noise and the constant harassment as they try to enter and leave. But what about the thousands of people in the area trying to concentrate on their work?

The offices of the Washington Post are directly across the street from the Madison.  Don’t they have a right to do their jobs without having to endure bullhorn-enhanced shouting and drum banging?

Or how about the working stiffs doing valet parking in the garage between the Madison and my offices? It’s bad enough that they have to spend the day in the freezing cold; should they really have to put up with that racket all day, for weeks on end?

Again, while I’m generally not sympathetic to the paid strikers holding up DOES NOT PAY PREVAILING WAGES signs, I think the folks picketing the Madison have a legitimate grievance. But how far should people be allowed to go in inconveniencing others in the name of free expression?