A high-level French Court has struck down the ban on the so-called 'burkini' adopted by many towns along the French Riviera. 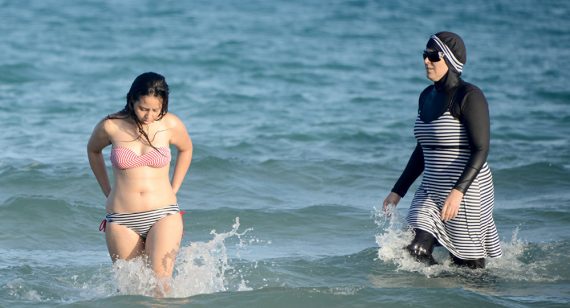 A French Court has struck down the law banning so-called ‘burkinis’ from French beaches:

PARIS — France’s highest administrative court on Friday overturned a town’s ban on burkinis, the full-body swimwear used by some Muslim women, setting a precedent that challenges similar bans in at least 30 other municipalities, most of them on the French Riviera.

The burkini — and the decisions to ban wearing them on beaches — has become the focus of spirited global debates over women’s rights, assimilation and secularism.

In its ruling, the court, known as the Council of State, found that the ban in the town of Villeneuve-Loubet violated civil liberties, including freedom of movement and religious freedom, and that officials had failed to demonstrate that the swimwear posed a threat to public order.

The ruling also made clear that the bans in other municipalities could be similarly overturned, and the Socialist government seemed conflicted on how to respond.

In a statement, Interior Minister Bernard Cazeneuve suggested that it was time for the local officials to back down, saying it was now “up to each and every one to responsibly seek to ease tensions, which is the only way to avoid disturbances to public order and to bolster coexistence.”

But later on Friday, Prime Minister Manuel Valls said in a statement on Facebook that the ruling “doesn’t exhaust the debate that has opened up in our society on the question of the burkini.”

Mr. Valls, who last week likened the burkini to a form of “enslavement,” said in his comments on Friday that “condemning the burkini in no way questions individual liberties.”

The court’s decision seemed unlikely to end the controversy as France enters a presidential election season. The center-right former president, Nicolas Sarkozy, who has announced his plans to run for president again, supports a national ban.

Although the ruling has only suspended the ban, a future hearing is expected to strike it down completely. While the decision does not apply directly to the many other French cities and towns that have banned the burkini, it amounts to a warning that their prohibitions are likely to be overturned if challenged. The largest such community is the city of Nice.

The United Nations and the White House seemed relieved by the ruling.

“Obviously we welcome the decision by the court,” Secretary General Ban Ki-moon’s chief spokesman, Stéphane Dujarric, who had expressed concern about the burkini ban, said at a news briefing, emphasizing “the need for people’s personal dignity to be respected.”

Josh Earnest, a White House spokesman, said the United States did not want to “second-guess” France, but noted that President Obama “believes strongly in the freedom of religion.”

The Council of State said the “emotions and concerns that are the result of the terrorist attacks, most notably the one carried out in Nice last July 14, do not suffice to legally justify the ban.”

Restrictions on liberty “must be justified by proven risks to public order,” the court said, finding that the town’s mayor had failed to meet that criterion.

Anti-discrimination and human rights groups had challenged the restrictions in local courts, but the rules were upheld, leading the groups to appeal to the Council of State, which heard arguments from lawyers for both sides on Thursday.

The bans have also fueled an intense political debate and split the French government, with Prime Minister Manuel Valls expressing support for them and several female ministers opposing the restrictions, even as they voiced distaste for the garments.

Marine Le Pen, the head of the far-right National Front, said after the ruling that French lawmakers should expand a 2004 law that bans ostentatious religious symbols in schools to all public places, except for “religious personnel,” but she did not make clear how broad that exception should be.

The showdown over the burkini was only the latest controversy over the principle of laïcité, or secularism, that has been a defining feature of French political life since the Revolution. Critics say the principle is increasingly used to justify measures that single out Muslims, rather than keeping government out of religion and vice versa, the original intent.

Jean-Pierre Mignard, a legal expert who is close to Mr. Hollande, predicted that the controversy would continue. “The fact that some elected officials are already contesting the Council of State’s decision shows that they have now entered an ideological showdown,” he said, while adding that if an anti-burkini law were put forward in Parliament, it would not likely pass muster with the country’s Constitutional Council.

Paul Cassia, a professor of public law at the University of Paris, said the decision on Friday “creates a precedent that applies to all the towns,” and “a strong presumption” that such bans are unlawful.

He said that Friday’s ruling showed that the principle of laïcité had been misapplied.

“It means neutrality for the state, not the individual,” Mr. Cassia said.

He added. “I was in Nice two days ago. There are women in the street with veils. It’s completely unreasonable to ban them from the beach, while they are free to walk around the city. It’s hysteria.”

The Telegraph notes that Mayors in some of the towns that have adopted a ban are vowing to continue the fight, while politicians on the French right seem intent on making this a national issue:

“This judgment does not affect us here because we had a fight over it [the burkini],” said Ange-Pierre Vivoni, referring to a brawl on a beach in Sisco on August 13 which preceded the ban.

Mayors who contest the ban will be backed by Nicolas Sarkozy, the former conservative president who introduced France’s ban on the Islamic full-face veil five years ago.

He demanded a nationwide burkini ban this week, placing Islam, immigration and security at the heart of his campaign to win back power from the Socialists in elections next year.

An ally of Mr Sarkozy, Guillaume Larrivé, said: “We support 100 per cent the mayors who introduced bans.”

He said parliament could still pass a law banning the burkini, which a poll suggested would be backed by two-thirds of French people.

Florian Philippot, deputy leader of the far-Right Front National, accused Mr Sarkozy of “poaching ideas from the FN to dupe our voters into backing him”.

Support for the bans is not confined to the Right.

The Socialist prime minister, Manuel Valls, has described the burkini as a “symbol of the enslavement of women” unacceptable under France’s secular constitution.

“Denouncing the burkini is not jeopardising an individual freedom. There is no freedom that locks up women! It’s denouncing a deadly, backward Islam,” he wrote on his Facebook page on Friday.

However, opponents of the bans, who include the Moroccan-born education minister, Najat Vallaud-Belkacem, have argued that they only served to fuel a racist political agenda as the election campaign kicks off.

The court’s decision was welcomed by the French Muslim Council, which described it as a “victory for the law and wisdom … that should make it possible to reduce tension”.

Feiza Ben Mohamed of a Muslim group based in Nice said it “gives Muslim women back their dignity”.

As I noted yesterday, the ban on the burkini is related to a much longer history of secularization in France that has roots going back to the French Revolution. In recent years, though, the effort to enforce that secularization has increasingly become a way for French authorities, civilians, and political leaders to target the nation’s growing and restive Muslim immigrant population. Long before the burkini came along, French law was banning the wearing of the Hijab, the Niqab, the Burka, and other forms of Muslim garb traditionally worn by Muslim women, including in at least some cases Muslim women who are otherwise quite cosmopolitan in their values rather than part of one of the fundamentalist sects typically associated with these forms of dress. The ban on the so-called ‘burkini’ is just the latest example of an effort by French authorities, on the left and the right, to enforce one view of what is considered acceptable dress on a minority and, even though it purports to apply regardless of religion, it’s plain that the ban, and it’s enforcement, was chiefly aimed at Muslim women, which appears to be at least part of the basis for the Court’s ruling in the case at issue here.

The fact that national political leaders such as Nicolas Sarkozy appear to be vowing to take up the issue of making the ban a nationwide one makes it clear that this debate is one that will continue in France long after the summer has ended. In that respect, it will become part of the much larger debate going on in France over immigration and how French culture ought to handle the large influx of Muslims from the Middle East and North Africa who have become such a large part of the populations of several French cities. As recent events in France have shown us, how France answers that question is likely to have important repercussions going forward. In the end, though, it seems clear that France, as well as other European states, is going to have to decide whether it wishes to become more open to immigrants and refugees, or whether it is more important to protect “French culture” from being changed by outsiders. If they choose the second option, then it’s rather obvious that accepting more immigrants is not a viable option. If they want the first, then they will have to accept the fact, as Americans largely have, that immigrants shape the nation that accept them as much as they are changed by their arrival in a new home. There is no way to reconcile the two visions of France, or Germany, or any other European nation based primarily on ethnicity otherwise.