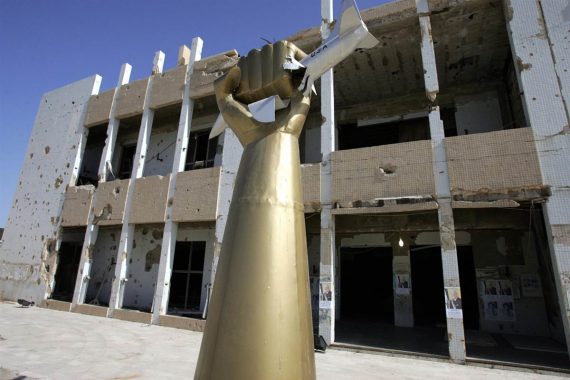 For those who are old enough to remember Operation El Dorado Canyon, the April 1986 air raid in which U.S. forces attacked military and other assets in Libya in retaliation for a terrorist attack that killed several American soldiers, the story of the claimed death of Muammar Gadhafi’s young adopted daughter is well known. Supposedly, the girl was killed when a tent in which Gadhafi was believed to be was attacked by U.S. bombers. It was a propaganda “victory” for Gadhafi that he returned to several times over the years. Now, it turns out that the whole thing may have been a lie:

Muammar Qadhafi’s adopted daughter, whom the Libyan dictator claimed was killed in the 1986 U.S. missile attack on his compound in Tripoli, is alive and working as a doctor, which suggests her supposed death was merely a propaganda stunt.

Hana Qadhafi reportedly was killed in a bombing raid at the age of four after Americans retaliated for a Libyan terrorist action. Libyan agents were linked to the April 1986 bombing of a nightclub in West Berlin several days prior, and then-President Ronald Reagan ordered the strike to reduce Libya’s ability to support terrorist activities.

Qadhafi scored a worldwide propaganda coup when pointed to Hana’s death to claim that he was the victim of American imperialist aggression.

But an investigation of Qadhafi’s now-abandoned Bab al-Azizia compound by The Irish Times shows a room that appears to have belonged to Hana, including documents that indicate she studied medicine and English in Tripoli.

A reporter for the Irish newspaper found an examination paper from a Libyan medical university, photographs of Hana Qadhafi, and a certificate that shows Hana obtained an ‘A’ in an English language course.

Abdel Salam Jalloud, Qadhafi’s former right-hand man, has previously been rumored to say that Hana Qadhafi was alive and working as a doctor, according to The Daily Telegraph. Two weeks ago, The Telegraph had obtained dental records belonging to a ‘Hana Qadhafi,’ which reopened interest in what happened to Qadhafi’s daughter.

Given the sheltered lives that Gadhafi and his family led over the past 25 years, and the lack of any real Western media presence during that time, it wouldn’t be at all surprising if this young woman was able to live, go to school, and become a physician all without the Western world realizing she was the same person that her father used to score propaganda points against the United States. One wonders if she is even aware of the fact that he did that, actually.

This isn’t the first indication we’ve gotten that Hana Gadhafi may in fact be alive since the uprising started:

In February, a German newspaper obtained a copy of a document related to the freezing of Muammar Gadafy’s assets in Switzerland after Libya’s uprising began. The document listed 23 members of the Gadafy clan, including Hana, whose date of birth is given as November 11th, 1985, making her six months old at the time of the US air strike.

I suppose we shouldn’t be too surprised that the whole story was apparently a lie.