Marine Corporal Garrett Jones is back serving as a combat infantryman in Afghanistan, only a year after losing most of his left leg in Iraq. On July 23, 2007, Jones was on foot patrol near the Iraqi city of Fallouja when he was injured by a roadside bomb. After the attack, his left leg was amputated above the knee. He developed infections and fevers. His weight dropped from 175 pounds to 125. At 21, Jones faced months of painful rehabilitation and a likely end to his service in the Marine Corps.

One year later, Jones is walking smoothly on a prosthetic leg. He not only continues to serve on active duty, but he has worked his way back to a war zone, serving with his Marine battle buddies in Afghanistan.

In previous wars, Jones would have received a medical discharge and returned to civilian life. But in the Iraq and Afghanistan conflicts, the Pentagon has made it possible for some amputees to return to duty — and for a few to deploy overseas again. Advances in medical care and high-tech prostheses have enabled amputees to function far better.

Jones said he couldn’t bear the thought of not deploying with close friends in his unit after he learned last fall that they would be sent to Afghanistan. He also wanted to pave a path for other amputees and show them what’s possible, he said.  “I want to be someone an injured Marine can talk to,” Jones said. “And I can tell them: ‘Times will be rough and not always easy as an amputee, but you can still make great things out of an unfortunate situation.’ That’s what I want to do.”

According to the report,  “Sixty-two soldiers, airmen or sailors have lost limbs in combat and returned to active duty, according to spokesmen for the Army, Navy and Air Force.  No information was available for the number of those amputees who have returned to duty in Iraq or Afghanistan; some estimates put the number at about a dozen.”

And how about this?

Jones said he had to pass medical tests and prove in training that he could walk effectively, get in and out of a Humvee and perform other physical tasks. Once, while in a simulator that mimics a Humvee rolling over, his prosthesis popped off, he said. He reattached it and continued the drill.

The man’s definitely a Marine. 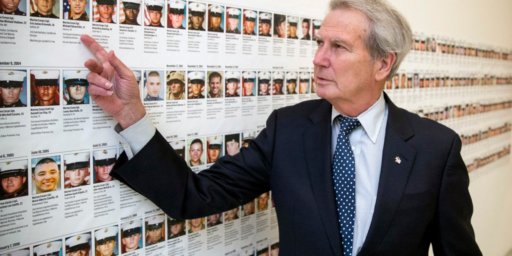