What will Republicans think of a candidate for President who admitted to smoking marijuana as recently as two years ago? 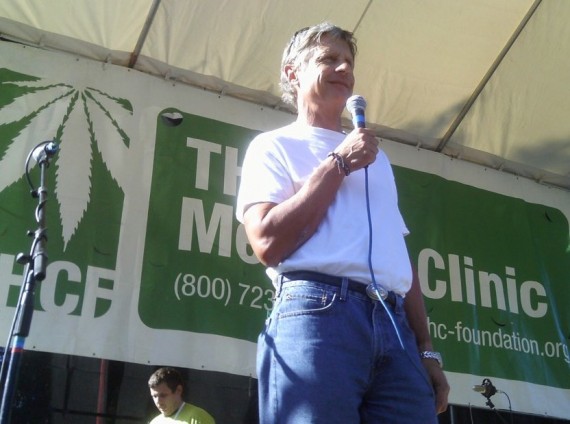 Former New Mexico Governor Gary Johnson has already distinguished himself among his fellow Republicans for his full-throated advocacy of marijuana legalization. Now, in a Weekly Standard interview, Johnson goes further:

Gary Johnson, the former New Mexico governor and a likely 2012 Republican presidential candidate, hasn’t been shy about his support for marijuana legalization or his personal use of the drug during his younger days. “I never exhaled,” he joked in a recent interview with The New Republic. But in an interview with THE WEEKLY STANDARD, Johnson admitted publicly for the first time that he smoked marijuana more recently—from 2005 to 2008—for medicinal purposes, he says.

“It’s not anything I volunteer, but you’re the only person that actually asked about it,” says Johnson, who governed New Mexico from 1994 to 2002. “But for luck, I guess, I wasn’t arrested.” Although smoking marijuana for medicinal purposes was illegal in New Mexico until 2007, Johnson says he needed the drug following a 2005 paragliding accident in Hawaii. His sails got caught in a tree, he stalled—and fell about fifty feet straight down to the ground, he says. Johnson suffered multiple bone fractures, including a burst fracture to his T12 vertebrae. “In my human experience, it’s the worst pain I’ve ever felt.”

“Rather than using painkillers, which I have used on occasion before, I did smoke pot, as a result of having broken my back, blowing out both of my knees, breaking ribs, really taking about three years to recover,” Johnson says. He explains that painkillers had once caused him to suffer nasty side effects and the pain of withdrawing from the pills was unbearable. So, Johnson says, in 2005 “someone” who cared for him gave him marijuana to deal with the pain.

For a typical presidential candidate, admitting to illegally smoking marijuana just a few years ago would be badly damaging. But Gary Johnson isn’t a typical candidate. He’s a libertarian prophet crying out for the Republican Party to “get back to the religion of the pocketbook,” and spreading his message takes precedence over appealing to Republican primary voters. His personal marijuana story may even help him spread the word. And marijuana legalization may, in fact, be a much easier sell to Republican primary voters than Johnson’s positions on national security, foreign policy, and social policy.

For what it’s worth, medical marijuana is legal in New Mexico, although it’s unclear whether Johnson suffered from the type of condition that would have authorized a prescription under the law at the time.  Since Johnson makes reference to not being arrested, one assumes that it wasn’t and that he effectively broke the law at the time. Now, granted, Johnson is the darkest of dark horses in the GOP field for 2012, but I honestly have to wonder if this revelation really hurts him. Surely, social conservatives aren’t going to like it, but then they weren’t going to vote for him anyway and neither are the neocons:

A dove in the mold of 2008 Republican presidential candidate Ron Paul, Johnson says, “I don’t think that we should be in Iraq or Afghanistan.” But the extent of his non-interventionism isn’t quite clear. On one hand, he isn’t even sure if U.S. troops should have been stationed in Europe to confront the Soviets following World War II. “I don’t think I have the expertise to be able to say that it was good or bad, it just seems to me that today, it doesn’t really seem warranted,” he says. Johnson also says Iran’s nuclear program isn’t a threat to the United States because the principle of “mutually assured destruction” would keep the Iranians from attacking.

On the other hand, Johnson is open, in principle, to waging humanitarian wars. “If there’s a clear genocide somewhere, don’t we really want to positively impact that kind of a situation?” he says. “Isn’t that what we’re all about? Isn’t that what we’ve always been about? But just this notion of nation building—I think the current policy is making us more enemies than more friends.”

In one notable break from Ron Paul’s foreign policy, Johnson offers rhetorical support for Israel. “I think that we really do have a vested interest in Israel and that we shouldn’t walk away from that interest,” he says. Johnson also puts distance between himself and the 9/11 Truthers, who found a friendly home in the Ron Paul campaign. “Based on what I know,” Johnson says, “no, I don’t think the 9/11 report should be reopened, based on my knowledge.”

While Johnson’s executive experience, along with his inclination to spurn the fringe elements that were attracted to the 2008 Paul campaign, could help him emerge as a more appealing candidate than Paul, his positions on social issues—which are more in line with Rudy Giuliani—could also limit his popularity in the Republican primaries.

But as a matter of law, Johnson thinks Roe v. Wade should be overturned. “It should be a states issue to begin with,” he says. “The criteria for a Supreme Court justice would be that those justices rule on the original intent of the constitution. Given that, it’s my understanding that that justice would overturn Roe v. Wade.”

Does Johnson think there’s a constitutional right to same-sex marriage? “I don’t see it,” he says, “but I do support gay unions. I think the government should be out of the marriage business and leave marriage to the churches.”

As I noted several months ago, Johnson is not your typical Republican by any means but he does represent, in a way none of the other potential candidates do and in a better manner than Ron Paul did in 2008, the libertarian wing of the GOP:

For one thing, Johnson doesn’t come with some of the baggage that Ron Paul did in 2008. There are no political polemics with controversial statements, or associations with people who’ve gone on to become advocates of odd conspiracy theories, in Johnson’s past. For another, the Republican Party of 2012 will clearly be far more receptive to the libertarian-ish positions that Johnson espouses than it was in 2008. Despite his fundraising successes and the fact that he was attracting enthusiastic support on college campuses, it was easy for the rest of the GOP to ignore Ron Paul in 2008 and dismiss him in the manner that pundits like Sean Hannity did. Even in a crowded field of candidates, it won’t be so easy to dismiss Gary Johnson.

This will be especially true if, as appears, we end up with a bunch of Republicans all saying the same thing.