Newt Gingrich has fallen into a statistical tie with Mitt Romney in the latest Gallup poll, mirroring his decline in other recent surveys. 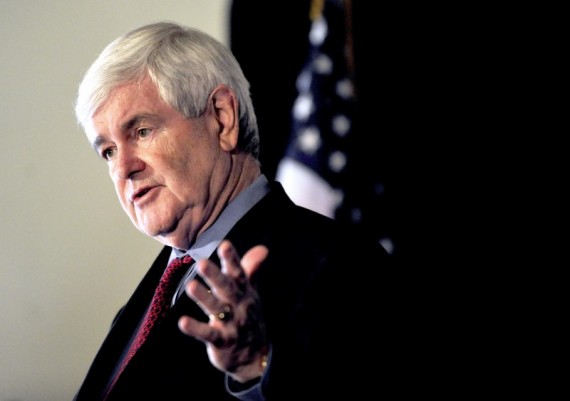 Newt Gingrich has fallen into a statistical tie with Mitt Romney in the latest Gallup poll, mirroring his decline in other recent surveys.

After enjoying 14- to 15-percentage-point leads over Mitt Romney in early December, Newt Gingrich is now statistically tied with Romney in national Republican preferences for the 2012 GOP presidential nomination: 26% for Gingrich vs. 24% for Romney. This follows a steady decline in support for Gingrich in the past 10 days.

Interestingly, though, Romney’s numbers have not moved at all, remaining flat within the polling margin.

No single candidate has benefited proportionately more from Gingrich’s 11-point decline — from 37% to 26% — over the past 10 days. Rather, Gallup polling finds slight increases in support for the six remaining major candidates in the race. Also, the percentage of Republicans favoring none of the candidates or who are unsure has risen by three points, from 14% to 17%.

Twenty-four percent of registered Republicans and Republican-leaning independents now favor Romney for the nomination. This is up just slightly from the 22% to 23% level seen for much of the first two weeks of December. Support for Ron Paul is now 11%, up from 8% to 9% earlier in the month — marking the first time his support has been above 10% since mid-September. At that time, a Gallup poll of all Republicans/Republican-leaning independents put his support at 13%.

Additionally, the national trend has been more than mirrored in Iowa:

Recent surveys of potential Iowa Republican caucus-goers show Gingrich falling behind Romney and Paul, after Gingrich led the field from mid-November through early December. This has been widely attributed to the barrage of negative ads that Gingrich’s Republican opponents have run against him in Iowa. However, even though Republicans nationwide have likely not seen or heard these ads, they have toned down their support for the former speaker, once again moving Romney close to front-runner status — something he hasn’t had an undisputed claim on since July. Unfortunately for Romney, the sizable percentage of the vote put in play by Gingrich’s recent decline has not all gone his way, but instead has been scattered among the entire field. This fits the pattern seen over and over again in 2011, in which Romney fails to benefit each time various Republican candidates have fizzled out after surging. That this pattern continues today adds to the body of evidence that a segment of Republican voters want to nominate someone other than Romney.

Of course, as Steven Taylor pointed out yesterday in response to the new CNN poll, we’re running out of Not Romney’s.

Update (Doug Mataconis): There are similar results in the new ABC News/Washington Post poll, which has Romney and Gingrich tied:

Two weeks before Iowans cast the first votes of the 2012 election cycle, Republicans nationally are sharply divided over whom their party’s presidential nominee should be, with Mitt Romney and Newt Gingrich locked in a dead-even race, according to a new Washington Post-ABC News poll.

Gingrich and Romney are each favored by 30 percent of Republicans and Republican-leaning independents. Running behind them is Rep. Ron Paul (Tex.), whose libertarian philosophy has attracted a strong following. He stands at 15 percent, about double his tally in an early November poll. All other active candidates are in the single digits.

As for the rest of the field, Bachmann is at 7%, Perry at 6%, Santorum at 4%, and Huntsman at 2%. The collapse of Newt Gingrich’s lead can be seen quite clearly in the RCP charts now: 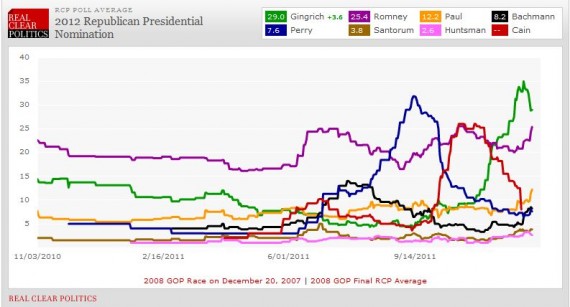 The candidate who seems to be benefiting the most from Gingrich’s collapsing support is Romney.