The pro-democracy protests in Hong Kong continue, and may intensify, after efforts at talks between the protesters and ruling authorities collapsed:

HONG KONG — The standoff between Hong Kong’s government and pro-democracy protesters intensified Thursday as the democrats demanded that the city’s top official be impeached over a multimillion-dollar payment from an Australian company and the government pulled out of talks with the protesters.

The talks, which were to have begun Friday, were the only active avenue for resolving a dispute that has led to sit-in demonstrations that have closed roads and disrupted life for nearly two weeks in Asia’s most important financial center.

The cancellation of the talks came after an afternoon news conference by the protest groups and their political allies in which they vowed to continue the protests and start a new phase of civil disobedience to maintain pressure on the government.

She said she hoped talks could still happen later, but declined to predict when or to set any conditions for a resumption.

While it was unclear whether the talks ever had any chance of success, given the wide gulf between the positions of the students and the government, the cancellation, just two days after the government had agreed to participate, was the latest in a string of policy reversals by Chief Executive Leung Chun-ying’s government as it has grappled with a response to the protest.

Mr. Leung himself came under increasing pressure on Thursday as democratic lawmakers demanded an independent investigation into whether he was guilty of bribery and official misconduct for accepting $6.4 million from an Australian engineering company and failing to disclose it.

The protesters had already been demanding Mr. Leung’s resignation over his backing of China’s plan to have nominees for his post vetted by a committee loyal to Beijing. That plan set off the protests two weeks ago.

The talks were to have focused on the main issue driving the protest, the election of Hong Kong’s chief executive. In August, China’s legislature issuedguidelines requiring a nominations committee to vet candidates for the post. Critics say the committee will be stacked with Beijing loyalists, as a similar committee is now, and will screen out any candidates not to the Communist Party’s liking.

The protesters have demanded open nominations, with voters choosing the candidates.

The current government, allied with Beijing, has rejected the idea of open nominations, saying that proposal violates Hong Kong’s Basic Law, as well as the guidelines set by China’s legislature.

The government’s embrace of those guidelines set off the protests, which drew tens of thousands of people into the streets and presented the greatest challenge yet to China’s authority here. Hong Kong, a former British colony, was returned to China in 1997, but has retained many freedoms unavailable on the mainland under an arrangement known as “one country, two systems.”

In a possible setback to the protesters, though, the protests seem to be losing popular support:

[T]he protest, which has complicated commutes and hurt businesses in the occupied areas, has waned and recently appeared to have been losing popular support.

On Wednesday the Hong Kong Bar Association, which had criticized the government’s earlier decision to use tear gas and pepper spray on the protesters, said that the demonstrations were harming many people and that acts of civil disobedience did not shield them from criminal liability.

The Bar Association said in a statement that it was “essential for participants to respect the rights and freedoms of other people who do not necessarily agree with their views and not to cause excessive damage or inconvenience.”

“They should also be ready to accept the criminal consequences of their conduct,” the statement said.

The dwindling support for the protesters may have been a factor in the government’s decision to renege on talks.

When I first wrote about these protests, I noted that what had begun as something largely led by students was expanding because of support from teachers, unions, and other segments of Hong Kong society. If that’s no longer the case, then the government obviously doesn’t need to pay nearly as much attention to the protesters as they would have otherwise. If the trend continues, then the protests will eventually die off. Which may be exactly what the leadership in Hong Kong and Beijing is hoping for. 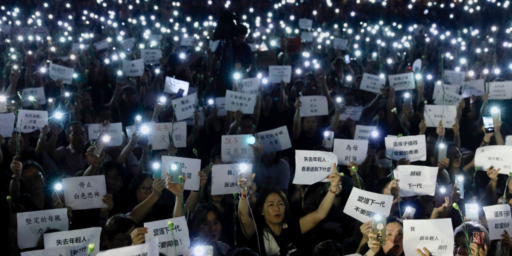