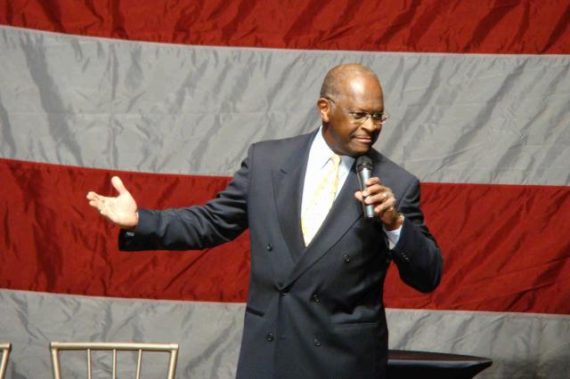 As if in answer to James Joyner’s post from earlier today, we have the first hat being thrown in the ring:

Washington (CNN) – Many people may have never heard of his name. And yet, he’s considering running to become the leader of the free world.

Cain talked to CNN about his presidential intentions. One challenge Cain will face is having virtually no name recognition, especially should he face other potential presidential candidates in a GOP primary. Some political observers have wondered if Cain has any chance of winning.

Who, you might ask, is Herman Cain? I know did. Well here’s some detail:

Herman Cain (born December 13, 1945) is an American newspaper columnist, businessman, politician, and radio talk-show host from Georgia. He is best known as the former chairman and CEO of Godfather’s Pizza. Cain’s newspaper column is distributed by North Star Writers Group. He currently lives in the Atlanta suburbs.

In 2004, Cain ran for the U.S. Senate in Georgia, pursuing the seat which came open with the retirement of Democrat Zell Miller. Cain sought the Republican nomination, facing Congressmen Johnny Isakson and Mac Collins in the primary. Cain and Collins both hoped to deny Isakson a majority on primary day in order to force him into a runoff. Collins tried to paint Cain as a moderate, citing Cain’s support for affirmative action programs, while Cain argued that he was a true conservative, noting that he opposed the legality of abortion even in cases of rape and incest.[6] Cain finished second in the primary with 26.2% of the vote, ahead of Collins who won 20.6%, but because Isakson was able to win 53.2% of the vote, Isakson was able to avoid a runoff against Cain.

Cain is not going to win the nomination, but he’ll grab some attention, and his ease in front of a camera is likely to work to his benefit.