Hillary Clinton got all choked up describing the travails of her daily struggle to a well-wisher today.

“My question is very personal, how do you do it?” asked Marianne Pernold Young, a freelance photographer from Portsmouth, New Hampshire. She mentioned Clinton’s hair and appearance always looking perfectly coifed. “How do you, how do you keep upbeat and so wonderful?”

Clinton began responding, jokingly. First talking about her hair: “You know, I think, well luckily, on special days I do have help. If you see me every day and if you look on some of the websites and listen to some of the commentators they always find me on the day I didn’t have help. It’s not easy.”

But then, Clinton began getting emotional: “It’s not easy, and I couldn’t do it if I didn’t passionately believe it was the right thing to do. You know, I have so many opportunities from this country just don’t want to see us fall backwards,” she said.

Her voice breaking and tears in her eyes, she said, “You know, this is very personal for me. It’s not just political it’s not just public. I see what’s happening, and we have to reverse it.”

“Some people think elections are a game, lot’s of who’s up or who’s down, [but] it’s about our country , it’s about our kids’ futures, and it’s really about all of us together,” she said.

Jim Geraghty has the best line on this I’ve seen so far: “Sniff… sniff… Do you smell that? It’s a distinct scent, kind of a Muskie smell, er, I mean, musky…”

My guess, though, is that, if this has any impact at all, it will be to humanize Clinton. Her chief flaw, according to critics, is that she’s too programmed, after all. And her approval ratings skyrocketed during the Monica Lewinsky mess.

Indeed, there’s already anecdotal evidence. Amy Chozick, blogging for WSJ, reports that Pernold, the questioner, was satisfied with the answer.

“She really loves us and wants us to succeed in the world,” she said. “I think she’s real now, there’s a person there.”

Allison Hampton, a retired teacher who was leaning toward voting for Barack Obama, says she’ll now go with Clinton. “When she broke up at the end, that came from the heart,” Hampton said. “She’s genuine and extremely intelligent.”

Jeralyn Merritt wonders, “Will the media now blast her as weak instead of shrill?” Almost certainly not.

Noam Scheiber says he has a newfound respect for Clinton:

Watching the public beating she’s taken over the last several days, I kept thinking I’d have a hard time not bawling in public if I were her. I’m not being snide here–I’m honestly impressed and amazed that she’s managed to stay so poised, but it’s also heartening to know that she’s a human who takes these things personally, because running for president should be very personal.

Heck, Bill Clinton managed to tear up on cue, almost always to his benefit. 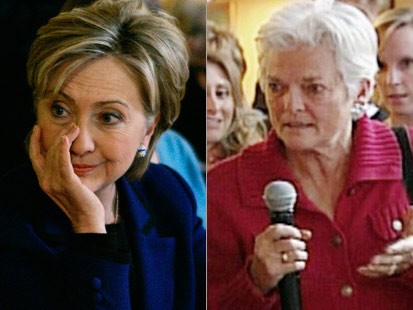 Woman Who Made Hillary Cry Voted for Obama