Mayor Frank Hibbard was on his way home from church one Sunday when he first saw the billboard for the Hooters restaurant chain. “Liquor in Clearwater, Poker in Vegas,” read the billboard, visible to westbound motorists on Gulf-to-Bay Boulevard, near the restaurant.

It took a little while to sink in.

“The first time I read it, it went over my head, and then I got it,” said Hibbard. “I thought, ‘That’s not good.’ “It’s full of innuendo, and it’s not what we want to see on Gulf-to-Bay right when you come in” to the city.

Hibbard demonstrates how right Forest Gump’s mama was when she told him, “Stupid is as stupid does.”

A variant of the billboard in question is thumbnailed at right. Adrants, which spells out the double entendre for those even slower than Mayor Hibbard, has an interesting discussion about the controversy, with commenter Elsie’s “It’s Hooters for crying out loud!” pretty well summing it up.

It’s an old joke, poorly told but hardly offensive. Certainly, no more so than the very concept of marketing a restaurant around the sexual desirability of scantily clad waitstaff. 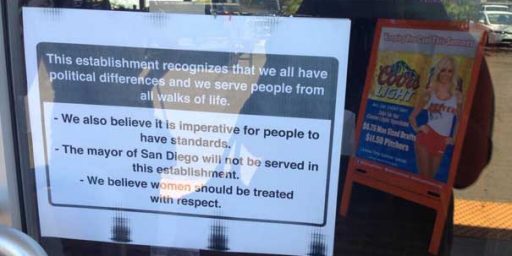