A group of political strategists who have spent years firing heavy artillery at each other came together at the Hay-Adams Hotel yesterday, put aside their weapons, decried the polarized state of debate in America and vowed a new approach to peaceful coexistence.

Toward that end, they are launching a Web site that they hope will eventually reach 30 million opinion leaders, elevate public discussion on matters from politics to sports to culture and, in the process, make them some money.

Mark McKinnon and Matthew Dowd, who were senior advisers in President Bush’s last two campaigns, are joining forces with Joe Lockhart, who served as a spokesman for President Bill Clinton, and Carter Eskew, a top strategist in Al Gore’s presidential campaign, in creating what they have dubbed HotSoup.com.

“There is nobody who knows how broken the system is more than us. . . . Everyone in the room could say they contributed to the polarization,” Lockhart said.

“The perceived polarization that exists in this country today is not a good thing,” said Dowd, adding that people are tired of watching “food fight” debates on television.

But HotSoup — a name chosen to evoke a tasteful mixing of ingredients — faces a substantial challenge in a cluttered online marketplace. The most popular political Web sites and blogs are fiercely partisan on both the left and the right, which is precisely what attracts their fans. McKinnon, Lockhart and their partners, who are investing their own money while seeking outside financing, say they will be a regular presence on the site but will not be exchanging partisan blows.

They have hired Ron Fournier, former chief political writer for the Associated Press, as editor in chief. A key consultant is Allie Savarino, an Internet advertising specialist and president of Sisterwoman.com.

Speaking with a group of skeptical reporters, the partners struggled to describe just what the site — its debut is planned for October — will be and how it will reach the target audience.

Dowd described the 10 percent of the public he terms “opinion drivers” as people teaching Bible class, coaching Little League or volunteering in soup kitchens — and very interested in news. “We have a technology that can bring people back together in a town-hall format,” he said.

At times, the strategists sounded as though they were doing penance for their roles in the 30-second attack ads and sound-bite skewering that have become staples in modern political campaigns. But they are not giving up their livelihood. McKinnon continues to represent political and corporate clients at Public Strategies. Dowd has his own consulting firm, and Lockhart, Eskew and two other HotSoup partners — Michael Feldman and Chip Smith — do the same at the Glover Park Group.

They envision a high-toned conversation on the site, buttressed by plenty of video and interactive message boards. But they had no ready answer for how to prevent the online debate from turning shrill and partisan. Savarino said users will be able to rank the quality of the postings, much like customer ratings on Amazon.com.

“The community will decide what issues are relevant,” Lockhart said. “We didn’t want this to be seen as a tug of war between left and right.”

I hate to a glass-half-emptier here, but my prediction is that this is going to sink faster than the Harriet Miers nomination. Nothing about it sounds very exciting or original and, frankly, I’m wary by instinct of any claim that a particular site is going to break into the political blogging game and “elevate” the tone. Especially, as BCB quips, when said project is “led by people who helped to de-elevate it in the first place.”

UPDATE: Don Surber lets it rip: “I would rather have a thousand chromosome-deficient Farkers morphing my picture into Beaker or worse, than to have these wanking wonks lecture me about civil discourse. These slithering simpletons serve the status quo. They want Washington and the establishment to control the debate. Ain’t gonna happen.” 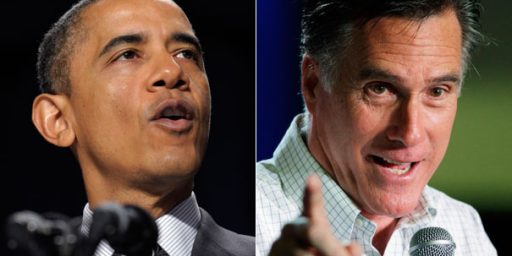