General Brent Scowcroft issued a statement through the Atlantic Council at noon:  “I strongly approve of President Obama’s decision regarding missile defense deployments in Europe. I believe it advances U.S. national security interests, supports our allies, and better meets the threats we face.”

Given that I work at the Atlantic Council and have blogged on its site taking a different view, I felt compelled to examine the situation.  I do so in “Brent Scowcroft Supports Obama’s Missile Defense Decision.”

As in those old E.F. Hutton commercials, when General Scowcroft talks, I listen. Scowcroft was, of course, National Security Advisor to Presidents Gerald Ford and George H.W. Bush. Less famously, he’s the Chairman of the Atlantic Council International Advisory Board and served as Chairman of the Board of the Council itself from 1998-1999.  While there may be four or five people whose views on international security I take as seriously, there’s simply no one I respect more.

After tracing Scowcroft’s words and actions on this subject over the past quarter century, I conclude:

As for myself, I remain agnostic on the technical and strategic merits of the move to sea-based systems vice the previous land-based plan.  Nathan Hodge and Robert Haddick do a good job lining up the pros and cons and there are just too many variables and unknowns.  And, frankly, I’m rather dubious of the threat of either a Russian or an Iranian nuclear attack, which strike me as woefully overplayed.

So, were we simply starting anew with two options, the Bush plan and the Obama plan, it would be a coin flip.  And General Scowcroft’s weighing in on the side of the latter might well tip the scales for me.

My concern, however, is that we weren’t starting from scratch but rather from a status quo where the United States has quite recently promised two allies that we’d put a system in their country that the extant governments considered a significant boost in their security (although, as noted in my earlier roundup, this is not a view universally shared in those states).  Further, the Russians have been both demanding that we rescind that deal and behaving badly toward its neighbors.  In my view, the optics very much matter in this case.

With General Scowcroft on the other side, though, I hold that opinion with rather more unease and less confidence than I did this morning.

Much more at the link.   I’d actually forgotten a lot of Scowcroft’s earlier work on the nuclear issue which, in hindsight, made today’s statement seem inevitable. 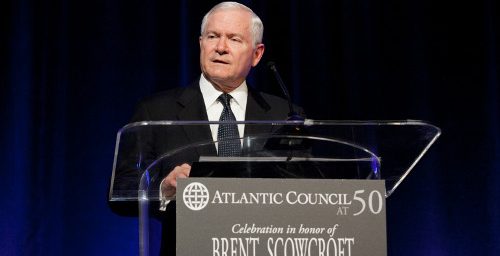