The wave of Ramadan attacks continues, including a strike near the second holiest site in Islam. 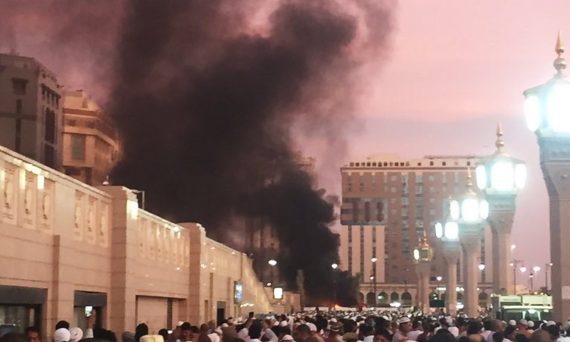 While not as bloody as recent attacks elsewhere in the world, ISIS got the world’s attention yesterday by striking inside Saudi Arabia:

BEIRUT — Suicide bombers suspected of links to the Islamic State struck for the fourth time in less than a week, targeting three locations in Saudi Arabia in an extension of what appeared to be a coordinated campaign of worldwide bombings coinciding with the Muslim holy month of Ramadan.

The triple attacks Monday ranged across the kingdom: near a U.S. consulate in Jiddah, a mosque frequented by Shiite worshipers in an eastern district, and at a security center in one of Islam’s holiest sites, the historic city of Medina. The Saudi Interior Ministry told the state-run television station that four security guards died in the Medina attack and five were injured.

The attacks offered further evidence that in the two years since it declared the existence of its so-called caliphate, the Islamic State has developed the capacity to strike at will in diverse locations around the world.

There was no immediate claim of responsibility, but the bombings bore the hallmarks of the Islamic State, with suicide attackers picking targets that closely coincided with the group’s declared enemies: Americans, members of the Shiite Muslim minority and the Saudi security services.

On Tuesday, the Saudi Interior Ministry identified the bomber behind the Jiddah attack as a 34-year-old Pakistani, Abdullah Qalzar Khan, who it said arrived in the kingdom 12 years ago to work as a driver. The statement gave no other immediate details.

The militant group, as it has in each of the three years since it announced its existence, had urged its followers to carry out attacks during the holy month of Ramadan, a period of fasting, abstention and prayer that will conclude Wednesday with a holiday of feasting and family visits.

This has turned into the most blood-soaked Ramadan yet in the Islamic State’s campaign. At least 290 people have been killed in attacks claimed by or linked to the Islamic State — at Istanbul Ataturk Airport, at a restaurant frequented by foreigners in the Bangladeshi capital, Dhaka, and in Baghdad. The vast majority of them, 222 people, died in the Baghdad blast, which targeted a shopping street packed with people celebrating the end of the day’s fast and shopping for the approaching holiday.

Omar Mateen, the gunman who killed 49 people at an Orlando nightclub last month, may also have been inspired by the call for Ramadan attacks issued by the Islamic State’s chief spokesman, Mohammed al-Adnani, in late May. But although Mateen cited the Islamic State as his inspiration in phone calls to emergency responders, investigators have found no evidence that he was directly linked to the group.

The Islamic State also did not claim the attack in Istanbul, but Turkish investigators say the group is the leading suspect.

The attacks in Saudi Arabia raised concerns that the group is taking deeper root there, potentially threatening the stability of one of America’s closest Arab allies. The Islamic State has frequently threatened the kingdom, whose status as the guardian of the holiest sites in Islam is challenged by a group that regards itself as the rightful leader of the Muslim world.

The first blast came in the afternoon outside the closely guarded U.S. Consulate in the city of Jiddah, the first of the past week’s attacks directly to target a U.S. facility. Two security guards were wounded, and the bomber died, after security guards approached the man and he detonated his explosives, according to the state-run Saudi Press Agency.

Hours later, a suicide bomber blew himself up near a mosque in the majority-Shiite city of Qatif in eastern Saudi Arabia. A resident of the city contacted by the Reuters news agency said there appeared to be no casualties other than the bomber, because worshipers had already gone home to break their fast. The Islamic State has in the past year claimed a number of deadly bombings against the Shiite minority in Saudi Arabia.

The final attack came in Medina, the second-holiest site in Islam, which is visited by millions of Muslim pilgrims every year. It apparently targeted Saudi security forces stationed near the 7th century Mosque of the prophet Muhammad, who is buried there.

As noted, there don’t appear to have been any deaths or injuries from any of these attacks, but the fact that ISIS was able to pull off attacks inside the Kingdom of Saudi Arabia to begin with is likely to set off shockwaves throughout the Muslim world. Of particular concern will be the attack on Medina, the second holiest site in Islam and one that, unlike Mecca, has seemingly been largely immune to violence in recent decades. What the impact of such attacks is likely to be is unknown, but some analysts suggested last night that the attack on Mecca in particular is likely to offend Muslims worldwide even though it was on a security checkpoint rather than the shrine itself. The more important immediate reaction, though, is likely to be the one from Saudi governing authorities, who have long prided themselves on their ability to keep the Kingdom relatively immune from the kind of terrorist attacks that have become all too common in other parts of the Islamic world. In the past, the Saud family has dealt with problems like this is one of two ways, either via brutal crackdowns or by striking a deal with militants that essentially pays them off to leave the Kingdom alone but does nothing to resolve the problem for the rest of the world. Often, as in the case of al Qaeda, the Saudi ‘solution’ has made the problem much, much worse for the rest of the world.

At the very least, what we see yet again in this attack is evidence of ISIS’s ability to strike nearly anywhere that it wishes even as its territory shrinks. One could argue that this is evidence of a force that is slowly dying striking out blindly in a last ditch effort to have an impact. It could be that, or it could be a sign of an evolving ISIS that is showing that it no longer needs to rely upon its base in Iraq and Syria to have an impact around the world, and a sign of a change in strategy that has also included the movement of forces to areas such as Libya, Yemen, and the Taliban controlled areas of Afghanistan. If that’s what we’re seeing then, as I’ve said before, our current strategy of using conventional military forces to strike at ISIS territory, particularly the targeting of the ‘capital’ of its putative Caliphate, may be too little, too late.