Jeb Bush told a group of supporters that his brother is his top Middle East policy adviser. This strikes me as being a bad idea. 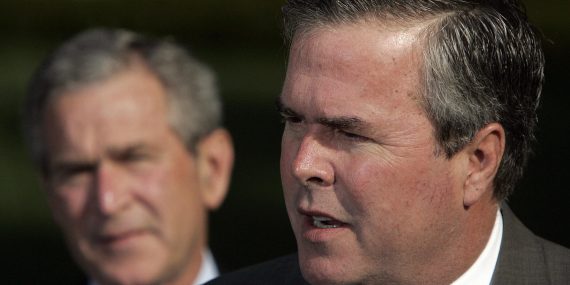 Jeb Bush told a group of potential supporters that he considers his brother George to be his top adviser on Middle East policy:

After spending months distancing himself from his family’s political legacy, Jeb Bush surprised a group of Manhattan financiers this week by naming his brother, former president George W. Bush, as his most influential counselor on U.S.-Israel policy.

“If you want to know who I listen to for advice, it’s him,” Bush said Tuesday, speaking to a crowd of high-powered investors at the Metropolitan Club, according to four people present. The Republicans in the room spoke on the condition of anonymity to divulge information about the private meeting.

The remark came as part of an answer to a question about Bush’s political aides and their policy views, and whether he relies on the guidance of former secretary of state James Baker, guests said. Baker’s role in Bush’s orbit has been the source of consternation for some major GOP donors, who were upset that the 85-year-old ex-diplomat spoke to a left-leaning Israeli advocacy group in March.

Jeb Bush said that Baker is not one of his close advisers and that he leans on his brother for insights when it comes to Israel.

Embracing George W. Bush as a foreign-policy confidant is a risky and unexpected move for the former Florida governor as he readies for a likely presidential bid. While the former president’s approval ratings have improved since he left office in 2009, his foreign-policy legacy — particularly the long war in Iraq — remains deeply unpopular. He has also become anathema to some conservative activists for presiding over an increase in the federal debt, among other policies.

Jeb Bush has surrounded himself with many of his brother’s advisers and has endorsed many foreign-policy positions that mirror those of the former president. At the same time, Bush has repeatedly stressed that he has his own worldview.

“I love my brother, I love my dad,” he told an audience in Chicago in February. “I admire their service to the nation and the difficult decisions that they had to make. But I am my own man, and my views are shaped by my own thinking and my own experiences.”

It is unrealistic, of course, to expect Jeb Bush to disown his brother, or his father, or to completely distance himself from their legacies. They are family, after all, and many of the same people that backed the two Presidents Bush are also backing Jeb in his bid to become the first President to succeed both his brother and his father in office. At the same time, though, there is no small degree of risk for Governor Bush in closely associating himself with either of them, and most especially with George W. Bush when it comes to the issue of American policy in the Middle East. Even inside the Republican Party, Bush’s legacy in that particular area of the world is not viewed with the greatest of fondness, and when you factor in independent voters the risk for the former Florida Governor seems even worse. As a general rule, former President Bush remains widely unpopoular with the American public, and polling has shown both continued long-standing opposition to his signature foreign policy legacy, the war in Iraq, and his war policy in general, Even without comments like this, Jeb Bush is going to have to deal with the whole “family legacy” issue and the fact that voters don’t necessarily seem too thrilled about replaying the Bush-Clinton fight of 1992 in the 2016 General Election. Closely associating himself with his brother like this, and on such a controversial part of his legacy, doesn’t really seem very advisable.

Of course, as Daniel Larison notes, Jeb’s comments are not really very surprising:

Based on everything Jeb Bush has said about the U.S.-Israel relationship and policies related to it, he agrees with his brother on these issues and has agreed with him for a long time. Like his brother, Bush thinks that there should be no “light” between the U.S. and Israel. He has made it fairly plain that he reflexively supports Israeli actions and policies. As far as I know, he has never criticized or opposed any. He endorses the hard-line “zero enrichment” demand that Iran hawks have wanted as part of the negotiations. It’s possible that Bush is mentioning his brother as an adviser in order to dispel any lingering impression that his association with James Baker matters. If so, it’s also a confirmation that Baker’s inclusion as one of Bush’s foreign policy advisers never meant anything, but then that should have been obvious.

What Larison says about Bush is, of course, largely true of the rest of the Republican field. With the exception of Rand Paul, all of the Republicans who either have announced their candidacy or are likely to do so in the coming months generally hold the same views regarding Israel, U.S. policy toward Iran, the War On Terror, and other foreign policy issues  that Jeb Bush does. Most of them will be unlikely to fully embrace the Bush legacy the way he seems to have done here, though. Because, well, they don’t have the family connection he does so they don’t really need to, and because there is, as I said, at least some segment of the GOP base that seems to have soured on the Bush legacy, although one assumes that many of those people are more inclined to support Rand Paul’s views on foreign policy than, say, Ted Cruz’s. That, in some sense, is the problem that all of these Republican candidates have going forward. They are all still tied, in one way or another, to the legacy of George W. Bush much like Democrats were long tied to the legacy of Jimmy Carter and George McGovern. As long as that’s the case, they are going to have problems in national elections regardless of what the last name of the candidate might be. 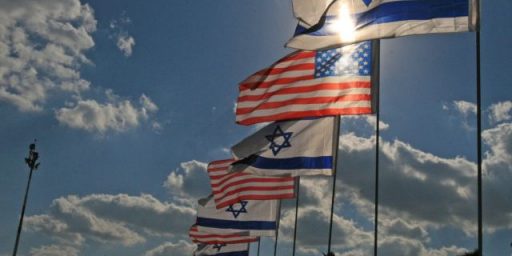