Thomas Jefferson took great pains to hide the word he originally used for "citizens" in the Declaration of Independence. 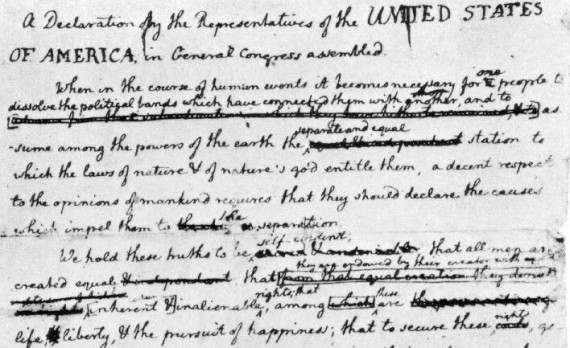 Applying some new technology to the Declaration of Independence reveals an interesting historical footnote.

That’s what Thomas Jefferson first wrote in an early draft of the Declaration of Independence to describe the people of the 13 colonies.

But in a moment when history took a sharp turn, Jefferson sought quite methodically to expunge the word, to wipe it out of existence and write over it. Many words were crossed out and replaced in the draft, but only one was obliterated.

Over the smudge, Jefferson then wrote the word “citizens.”

No longer subjects to the crown, the colonists became something different: a people whose allegiance was to one another, not to a faraway monarch.

Scholars of the revolution have long speculated about the “citizens” smear — wondering whether the erased word was “patriots” or “residents” — but now the Library of Congress has determined that the change was far more dramatic.

Using a modified version of the kind of spectral imaging technology developed for the military and for monitoring agriculture, research scientists teased apart the mystery and reconstructed the word that Jefferson banished in 1776.

“Seldom can we re-create a moment in history in such a dramatic and living way,” Library of Congress preservation director Dianne van der Reyden said at Friday’s announcement of the discovery.

“It’s almost like we can see him write ‘subjects’ and then quickly decide that’s not what he wanted to say at all, that he didn’t even want a record of it,” she said. “Really, it sends chills down the spine.”

The library deciphered the hidden “subjects” several months ago, the first major finding attributed to its new high-tech instruments. By studying the document at different wavelengths of light, including infrared and ultraviolet, researchers detected slightly different chemical signatures in the remnant ink of the erased word than in “citizens.” Those differences allowed the team to bring the erased word back to life.

But the task was made more difficult by the way Jefferson sought to match the lines and curves of the underlying smudged letters with the new letters he wrote on top of them. It took research scientist Fenella France weeks to pull out each letter until the full word became apparent.

Interesting that Jefferson took such pains to conceal his original word when he didn’t do that for any other word he changed. But the difference in the two words is powerful, indeed, in shaping attitudes. The Brits are still subjects of the queen even to this day, despite having been a democracy nearly as long as we have.