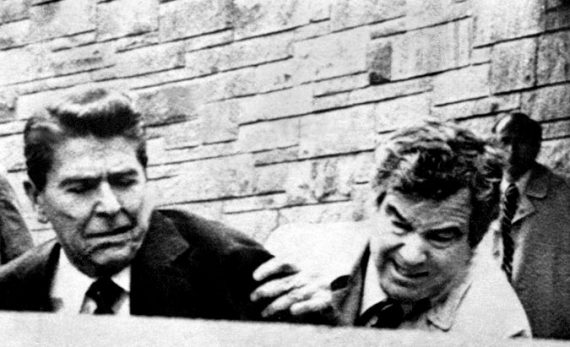 Jerry Parr, the Secret Service agent credited with saving Ronald Reagan’s life by pushing him into the Presidential limoseane as John Hinckley Jr. was firing at him, has died at the aged of 85:

Jerry S. Parr, the Secret Service agent credited with saving President Ronald Reagan’s life during an assassination attempt in 1981, died Friday at a hospice near his home in Washington. He was 85.

The death was confirmed by Mr. Parr’s wife, Carolyn, who said he died of congestive heart failure.

Mr. Parr was just feet away from Mr. Reagan when John W. Hinckley Jr. opened fire on the president outside the Washington Hilton hotel on March 30, 1981.

“When he was about probably six or seven feet from the car, I heard these shots,” Mr. Parr said in a 2013 interview promoting the memoir he wrote with his wife. “I sort of knew what they were, and I’d been waiting for them all of my career, in a way. That’s what every agent waits for, is that.”

Mr. Parr grabbed the president, shoved him into a waiting limousine and then jumped in on top of him. A shift supervisor grabbed both men’s feet, shoved them further inside and slammed the door behind them, Mr. Parr said. Mr. Parr then shouted to the driver, “Take off!”

“Somehow intuitively I just looked out the back window as we were moving, and I saw three bodies on the sidewalk,” he said.

At that point, alone with Mr. Reagan in the back of the limousine, Mr. Parr did not know that the president had been wounded.

Mr. Parr diverted the president’s limousine from its route to the White House to the emergency room of the George Washington University Medical Center.

At the hospital, Mr. Reagan, who was shot once with a .22-caliber bullet, was initially reported in good condition, and underwent surgery for two hours. He returned to the White House 12 days later.

“Without Jerry looking out for Ronnie on March 30, 1981, I would have certainly lost my best friend and roommate to an assassin’s bullet,” Mr. Reagan’s widow, Nancy, said in a statement reported by CNN on Friday night. “Jerry was not only one of the finest Secret Service agents to ever serve this country, but one of the most decent human beings I’ve ever known. He was humble but strong, reserved but confident, and blessed with a great sense of humor. It is no wonder that he and my husband got along so well.”

Mr. Parr was an agent for 23 years, his wife said, and retired in 1985. His fascination with the service began as a child, he wrote, when his father took him to see the 1939 film “Code of the Secret Service,” which starred a young Mr. Reagan as Agent Brass Bancroft.

“It was such a strange thing that me,” Mr. Parr said, “seeing his image on a film when I was 9 years old, and then I ended up helping save his life.”

The president was at the hospital minutes after Mr. Hinckley’s gun went off, and Mr. Parr’s grace under fire and quick thinking were widely considered as having saved Mr. Reagan’s life.

“That’s not something you prepared for,” Ms. Parr said in a telephone interview on Friday night.

When Mr. Reagan awoke the morning after the assassination attempt, The Associated Press reported in 1981, one of his first requests was to speak to Mr. Parr. Donald T. Regan, the treasury secretary at the time, told The A.P. that the president wanted to apologize to Mr. Parr because, not immediately realizing that he had been shot, he first thought his chest pains had been caused by Mr. Parr’s shove.

“He was proud of his work,” Ms. Parr said. “He felt very satisfied with his work. He felt like it was a great privilege.”