A New York judge has sided with comedian Jerry Seinfeld in a bizarre lawsuit by a crazy woman who writes cookbooks. 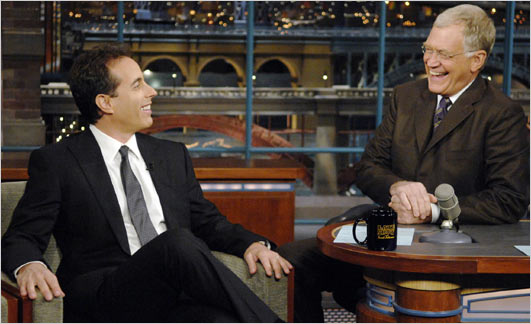 A New York judge has sided with comedian Jerry Seinfeld in a bizarre lawsuit by a crazy woman who writes cookbooks.

A judge has thrown out a lawsuit by a cookbook author who accused Jerry Seinfeld of hurting her reputation by mocking her on national television.

In a ruling filed with the court Friday, state Justice Marcy Friedman said it was clear the comedian was joking when he called author Missy Chase Lapine a “wacko” during an appearance on the “Late Show with David Letterman” in 2007. The judge said Seinfeld also has a constitutional right to express his opinion.

The suit stemmed from a legal battle in which Lapine accused Seinfeld’s wife, Jessica, of stealing her idea for a book on how to get children to eat healthy. Both women had published their books that year. Lapine’s was called, “The Sneaky Chef: Simple Strategies for Hiding Healthy Foods in Kids’ Favorite Meals.” Jessica Seinfeld’s was titled “Deceptively Delicious: Simple Secrets to Get Your Kids Eating Good Food.”

The case became tabloid fodder, and Seinfeld addressed it on Letterman with a heaping of ridicule.

“One of the fun facts of celebrity life is wackos will wait in the woodwork to pop out at certain moments of your life to inject a little adrenaline into your life experience,” Seinfeld told Letterman. “So there’s another woman who had another cookbook,” he continued. “My wife never saw the book, read the book, used the book … But the books came out at the same time. So this woman says, ‘I sense this could be my wacko moment.'”  Seinfeld said Lapine was accusing his wife of “vegetable plagiarism.” “She comes out and says, ‘You stole my mushed-up carrots. You can’t put mushed-up carrots in a casserole. I put mushed-up carrots in the casserole.'”

A federal court eventually agreed with Seinfeld that the copyright suit was baseless and tossed it out last year. The judges said there was nothing original about the idea of “stockpiling vegetable purees for covert use in children’s food.”

Friedman’s ruling, signed Wednesday but filed Friday, noted that you can’t sue someone for libel in the U.S. merely for hurling an insult. You must show that a person lied about facts in order to damage a person’s reputation and did so in such a way that a reasonable person would have believed that those false statements were true.

Given all of the hyperbole in his jokes — one of which implied that people who went by three names, like Lapin, were predisposed to become assassins — the judge said she found it “inconceivable” that a reasonable viewer thought he was serious about fearing for his safety. And as for Seinfeld’s suggestion that Lapine was an opportunist making up baseless plagiarism claims, the judge wrote that he was entitled to voice his opinion. “If the law were to the contrary, the protection of the First Amendment would be unacceptably denied to persons who publicly defend themselves against what they believe to be baseless charges or lawsuits,” she wrote.

Apparently, famous comedians have First Amendment rights, too.  Who knew?