Unless something happens in the next ten days, Joe Biden will become the first two-term Vice-President who didn't need to cast a tie-breaking vote in the Senate. 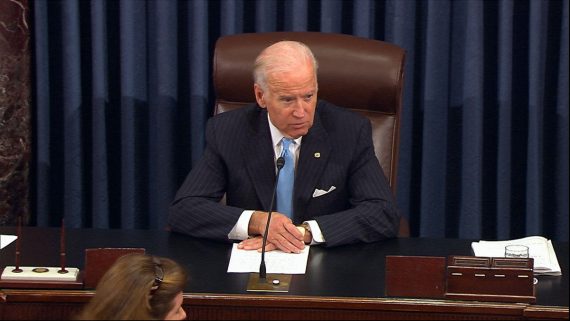 Unless something happens between now and next Friday, Joe Biden is set to leave office as one of only a handful of Vice-Presidents who has never cast a tie-breaking vote in the Senate, and the only two-term Vice-President to have this distinction:

Joe Biden is poised to leave office on Jan. 20 with a distinction — the longest-serving vice president to never cast a tie-breaking vote in the U.S. Senate.

The Constitution assigns few duties to vice presidents. One of them, breaking ties in the Senate — “The Vice President of the United States shall be President of the Senate, but shall have no vote, unless they be equally divided” — used to happen more frequently. In the first 114 years after the Constitution took effect, vice presidents broke 177 ties, according to data compiled by the Senate Historical Office. In the past 114 years, they’ve broken 67.

Since Biden became vice president eight years ago, the Senate has taken nearly 1,500 roll-call votes requiring a simple majority — none have required Biden’s vote to break a tie. Barring a tie in the last week and a half of his term, Biden will be the only vice president who has served more than one term without breaking a tie.

Aside from Biden, 11 vice presidents never cast a tie-breaking vote. Unlike Biden, none of those served more than one term. Only two others — Charles Fairbanks (Theodore Roosevelt’s vice president) and Dan Quayle (George H.W. Bush’s vice president) — served even a full single term. John Adams, the first vice president, broke 29 ties, the most of anyone to occupy the office.

As FiveThirtyEight’s Aaron Rycoffe notes at the linked article, there are a number of reasons that it’s likely that this has happened.

First among these is the fact that, for the most part, the partisan make-up of the Senate has made it unlikely that there would be tie votes to begin with. When Biden first took office, for example, the Democratic majority fluctuated between 60 seats, albeit that only lasted for a brief period, and 57 seats. (Source) The Democratic majority for the next two years was slightly smaller during the next two years was smaller, down to between 53 or 52 seats depending on when you looked at the actual number it was still a sizable enough majority assuming it stayed united. (Source) For the two years after the 2012 election, the Democratic majority was higher at 55 or 54 seats depending on the particular time you looked at the numbers. (Source) Finally, following the 2014 midterms, the Republican majority was  54 seats throughout the two years of the 114th Congress. (Source) For the most part, the size of these majorities made a tie vote unlikely since they required at least two and, at one point, as many as ten Senators to defect from the party line or otherwise not cast a vote for whatever reason. Additionally, while defections may have been likely among party caucuses in the Senate in the past, the increase in partisanship and party loyalty on both sides of the aisle in recent years means that it is far less likely that there would be defections among the contemporary Senators than in the past. Finally, the fact that current Senate practice has seemingly placed more importance on the sixty-vote majority needed to break cloture than on the simple majority needed to pass laws under normal order. In fact, in many cases, the two parties have operated under the agreement that a successful vote on breaking cloture would make a separate vote on passage unnecessary. Thus, Biden has had essentially no realistic opportunity to cast a tie-breaking vote, putting him in the small company of those Vice-Presidents without a tie-breaking vote and in a unique position among two-term Vice-Presidents.

Rycoffe notes that it’s more likely that Vice-President-Elect Pence might have the opportunity to cast a tie-breaking vote given that the GOP majority presently stands at  52 to 48. I’d suggest, however, that the same factors that made the need for a tie-breaking vote unlikely during Biden’s tenure as Vice-President will also make it unlikely at least for the first two years of Pence’s tenure as Vice-President, however long that might last. In fact, I don’t think it’s at all unlikely that we could see the record mentioned above, in which the Senate went more than twelve years from 1899 and 1911 without needing a tie-breaking vote. This time, it would mean no tie-breaking votes until at least early 2012, something which seems entirely feasible given how the Senate has operated in recent years. At the very least, though, Vice-President Biden’s record looks as though it will stand for some time to come.