As everyone’s heard by now, a man named Joe Stack crashes his small airplane into a building in Austin this morning, thankfully killing only himself.

A pilot furious with the Internal Revenue Service crashed his small plane Thursday into an office building in Austin, Texas, that houses federal tax employees, setting off a raging fire.

Officials are investigating whether the pilot, identified by authorities as Joseph Andrew Stack, a 53-year-old software engineer who lived in Texas, crashed the plane intentionally. Stack was confirmed dead.

The crash was almost certainly intentional, we now know.  Indeed, he left an online “manifesto” explaining why he was doing what he did.

If you’re reading this, you’re no doubt asking yourself, “Why did this have to happen?” The simple truth is that it is complicated and has been coming for a long time. The writing process, started many months ago, was intended to be therapy in the face of the looming realization that there isn’t enough therapy in the world that can fix what is really broken. Needless to say, this rant could fill volumes with example after example if I would let it. I find the process of writing it frustrating, tedious, and probably pointless… especially given my gross inability to gracefully articulate my thoughts in light of the storm raging in my head. Exactly what is therapeutic about that I’m not sure, but desperate times call for desperate measures.

We are all taught as children that without laws there would be no society, only anarchy. Sadly, starting at early ages we in this country have been brainwashed to believe that, in return for our dedication and service, our government stands for justice for all. We are further brainwashed to believe that there is freedom in this place, and that we should be ready to lay our lives down for the noble principals represented by its founding fathers. Remember? One of these was “no taxation without representation”. I have spent the total years of my adulthood unlearning that crap from only a few years of my childhood. These days anyone who really stands up for that principal is promptly labeled a “crackpot”, traitor and worse.

While very few working people would say they haven’t had their fair share of taxes (as can I), in my lifetime I can say with a great degree of certainty that there has never been a politician cast a vote on any matter with the likes of me or my interests in mind. Nor, for that matter, are they the least bit interested in me or anything I have to say.

Why is it that a handful of thugs and plunderers can commit unthinkable atrocities (and in the case of the GM executives, for scores of years) and when it’s time for their gravy train to crash under the weight of their gluttony and overwhelming stupidity, the force of the full federal government has no difficulty coming to their aid within days if not hours? Yet at the same time, the joke we call the American medical system, including the drug and insurance companies, are murdering tens of thousands of people a year and stealing from the corpses and victims they cripple, and this country’s leaders don’t see this as important as bailing out a few of their vile, rich cronies. Yet, the political “representatives” (thieves, liars, and self-serving scumbags is far more accurate) have endless time to sit around for year after year and debate the state of the “terrible health care problem”. It’s clear they see no crisis as long as the dead people don’t get in the way of their corporate profits rolling in.

It goes on like that for a piece but you get the idea.

While some are dubbing Stack a rightwing nut, Michael Tomasky correctly notes that Stack was “neither right nor left.”  He explains, “Stack was in fact angry at everyone. Angry at the IRS. Angry at the government generally. Angry at unions. But also angry at corporate greed and at rich people and at ‘thugs and plunderers’ of various stripe.”  It sounds like he was just at wit’s end and looking for someone to blame — and finding plenty of likely suspects.

A related question is whether Stack was a terrorist.

The safe answer is Tomasky’s:  “Does that make him a terrorist? It’s an interesting question. Was he trying to create terror among the citizenry? We don’t know yet.”

But calling anyone who both has a political beef and goes off violently a “terrorist” seems to render it a word with no special meaning.  Most accepted definitions of the term include some sort of action-oriented objective. Specifically, the instilling of fear in the general public in hopes that it leads to political change.

What is it that Stack thought he was going to achieve?  Presumably, the news that an airplane was crashing into a building inspired some short-lived terror.   But unlike, say, the 9/11 attacks, there’s not much reason to think that there will be follow-on attacks since this appears to be a “cell” of one and the supply would seem exhausted.

This just seems like some poor nut who got frustrated and wanted his suicide to generate some notice.

(Oh: And I would advise against searching for images of “Joe Stack” at this time.  Trust me.)

UPDATE: C&L’s David Neiwert notes that the Department of Homeland Security has pronounced that “there’s no nexus with terrorist activity” and argues,

Well, this is true only if the conventional understanding of the word “terrorism” has now been narrowed down to mean only international terrorism and to preclude domestic terrorism altogether.

Since when, after all, is attempting to blow up a federal office as a protest against federal policies NOT an act of domestic terrorism?

You know, Timothy McVeigh used a “dangerous instrument” to kill 168 people in Oklahoma City. He too was angry at the federal government, and was converted to the belief that acts of violence was the only means possible to prevent the government from overwhelming our freedom and replacing it with tyranny. He also believed that his act of exemplary violence would inspire others to take up similar acts to stave off the threat of tyranny.

That’s all true.  But that still doesn’t make every act of violence committed by someone angry at the government “terrorism.”  Who, exactly, was Stack trying to terrorize? What did he think he was going to accomplish?

McVeigh was a terrorist, without question, even though his act of mass murder had no significant chance of achieving his political aims.  Ditto, for that matter, the 9/11 attacks; just because al Qaeda’s goals are absurd doesn’t mean they’re not systematically trying to achieve them with violence.   But both plots created significant public terror and were at least highly organized toward achieving aims.   As best we call tell from early evidence, Stack was just mad as hell and hoping to draw attention to his “manifesto.”

UPDATE 2:   Glenn Greenwald and Mark Safranski have longish, perfectly reasonable, essays arguing that of course Stack is a terrorist.  I commend them to you.  We agree on the facts; it’s basically a semantic discussion at this point.

Greenwald, Yglesias, and others are contending that the reluctance to call Stack a terrorist stems mostly from the fact that he’s not a Muslim.  As for myself, longtime readers will note that I’ve quite frequently argued that individual Muslims who go on killing or mayhem sprees are mostly nuts rather than bonafide terrorists.  I tend to use the word sparingly, reserving it for those who can plausibly do real damage, actually inspire terror, and have some plausible hope that their actions will result in desired policy changes.  But I concede that drawing the line can be arbitrary. 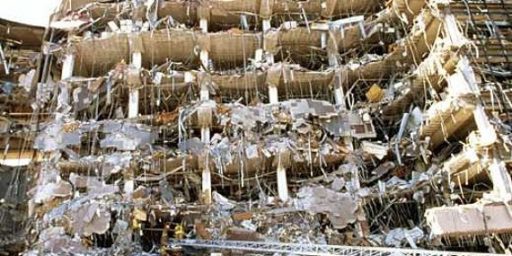