The longtime NFL reporter is gone at 67.

John Clayton, whose list of contacts in the NFL was matched only by his attention to detail and dedication to his craft, died Friday in Washington after a brief illness, his family said.

Clayton, nicknamed “The Professor,” was one of the country’s foremost NFL insiders in a five-decade career that included over 20 years with ESPN. Clayton’s pursuit of news and information was done with such fervor that, as ESPN’s Chris Mortensen said, “Anyone paying attention walked away a little more educated.”

“Long before he became an ESPN icon, John might have been the best news-breaking team beat reporter of his generation, the type who could sit on a story for months and then break it before others had any clue what was going on,” said The Athletic’s Mike Sando, a longtime friend of Clayton’s. “He was that good. On a personal level, John was incredibly generous to me when I succeeded him as the Seahawks beat reporter at the Tacoma News Tribune many years ago. I owe so much to John and will miss him terribly.”

Clayton, a native of Braddock, Pennsylvania, began his career in 1972 as a teenager covering the Pittsburgh Steelers in a season that included the “Immaculate Reception.” He then attended Duquesne University and was hired by the Pittsburgh Press when he was a senior at Duquesne. He continued his work up until just 10 days ago, when he broke down the Seattle Seahawks’ blockbuster trade of Russell Wilson to the Denver Broncos for Seattle Sports 710 AM, where he was a regular contributor.

“We will all miss your words and brilliance @JohnClaytonNFL #RIPJohnClayton,” Wilson wrote in a tweet, as he and former colleagues and friends of Clayton took to social media Friday night to offer remembrances.

“The Seahawks are heartbroken to learn of the passing of John Clayton,” the team said in a statement. The Steelers called Clayton “a Pittsburgh media icon.”

“The number of NFL execs and coaches that I’ve heard from have expressed an overwhelming theme of great respect and a sense of deep loss and shock,” said Mortensen.

Clayton spent over a decade at the Tacoma (Wash.) News Tribune before a more than 20-year run at ESPN. Clayton also wrote for several outlets, including the Washington Post, in recent years after his long stint at ESPN, and had been the sideline reporter for the Seahawks radio network for five seasons. He also contributed stories for KKFN-FM (104.3 FM) in Denver since February of last year.

“John was a pioneer as an NFL insider but also one of the kindest men you could ever work with,” said Seth Markman, vice president and executive producer at ESPN. “He literally never said no to a show that asked him to come on — from 6 a.m. to midnight, if you asked for the Professor, he was there for you. I’ll also personally remember how he loved and cared for his beloved wife Pat as she has battled multiple sclerosis. We will all miss John greatly.”

Clayton received the profession’s highest honor, now known as the Bill Nunn Memorial Award, in 2007. The award is presented annually by the Pro Football Writers of America in recognition of “long and distinguished reporting in the field of pro football.”

As did his appearance on “This is SportsCenter” commercials for ESPN, which to this day are among the best of the popular segments. Clayton’s appearance included a spot where he appeared as he would on SportsCenter, in a coat and tie, before he tore both off to reveal a Slayer T-shirt, let down his long hair, jumped on a bed and shouted, “Hey ma, I’m done with my segment.”

My television viewing habits have changed so that I haven’t regularly watched SportsCenter or any of ESPN’s coverage aside from live games in years but Clayton was one of my favorites back in the day. He was let go by the network back in 2017, along with some other high-priced talent, as part of a series of purges the company has made since the cord-cutting phenomenon changed their business model.

The SportsCenter ad mentioned in the obit was indeed a classic: 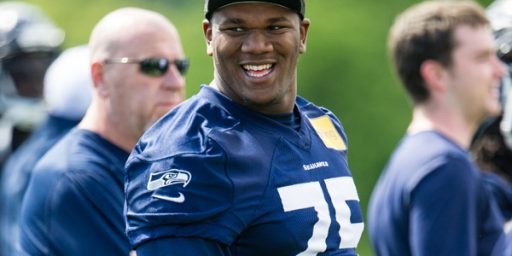