In an ordinary year, Ohio Governor John Kasich seems like he'd be a perfect candidate for Republicans in an era when winning the Buckeye State is essential to winning the White House. But things are far from ordinary in the GOP. 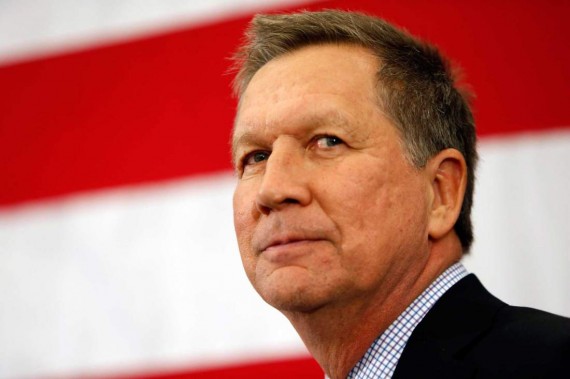 Ohio Governor John Kasich is set to enter the race for President next month:

Ohio Gov. John Kasich will jump into the crowded Republican presidential field on July 21 at the student union at his alma mater, The Ohio State University, in Columbus, advisers tell POLITICO.

Kasich, 63, who was overwhelmingly reelected in November, will aim to appear less scripted and guarded than the leading candidates. Advisers say he combines establishment appeal with a conservative record going back to his stint as House Budget Committee chairman, during his 18 years as a congressman from Ohio.

Despite his late start, Kasich will be one of the most closely watched candidates — partly because Ohio is such a crucial presidential state, putting Kasich on many short lists for vice president.

Kasich briefly pursued a presidential bid in the 2000 cycle, but got no traction and dropped out in July 1999, endorsing George W. Bush.

For Kasich’s announcement on July 21, the doors will open at 9:30 a.m. at The Ohio Union at Ohio State.

The announcement date puts Kasich a week behind the other Midwestern governor in the race, Wisconsin Gov. Scott Walker, who plans to announce the week of July 13.

On paper at least, Kasich seems like the kind of candidate that the Republican Party would love to see running for President. After serving in the Ohio State Senate, he spent nearly two decades in Congress, rising to head the powerful House Budget Committee not long after the GOP took control of Congress in 1994, and made a name for himself as a strong fiscal conservative. He ran for President in 2000, which was a long shot to begin with considering how rare it actually is for the House of Representatives to give birth to a Presidential candidate, and after that spent nearly a decade in the private sector before running for Ohio Governor in 2010 when he benefited strongly from the Republican wave that year. Last year, he was re-elected in a landslide thanks in no small part to the fact that Ohio Democrats could not find a credible candidate to run against him and the fact that Ohio’s economy had improved so much from the Ted Strickland era that there was likely no candidate who could have made a credible case to fire the Governor. In any case, given the importance of Ohio to the Republican Party’s chances of getting 270 Electoral Votes in November 2016, one would think that Kaisch would be a top contender for the nomination. One would also be wrong.

Kasich’s problems as a candidate are two-fold. First of all, while he’s obviously intelligent and well-versed in policy issues, he doesn’t come generally come across as the kind of passionate candidate that does well on the stump in states like Iowa or New Hampshire. This is something people pointed out about former Minnesota Governor Tim Pawlenty four years ago, who ended up dropping out after a disappointing showing in the Iowa Straw Poll. It is, perhaps, a sad commentary on our media drive political culture, but it’s true. The bigger issue for Kasich, though, is that he’s taken steps as Governor that have caused many in the GOP base outside Ohio to turn against him. The best example of this, of course, is his decision to support Ohio’s adoption of the Medicaid expansion provided by the Affordable Care Act, something that other Republican Governors running for President such as Scott Walker and Rick Perry have resisted. Among other things, this has caused Kaisch, who was among the most conservative members of Congress in the 1990s, to somehow now considered a Republican In Name Only, or a RINO. No doubt, his statement yesterday that the GOP needs to accept the Supreme Court’s decision on the rights of gays and lesbians to be legally married will contribute to that reputation in some some circles

The polls reflect Kasich’s dilemma. He is or near the bottom in national polling and in the polls that have been done in the early states. Right now, he would be excluded from the early debates that begin just about a week after his scheduled announcement. Obviously, he is hoping that the announcement, combined with whatever pre-announcement campaigning and press appearances he makes, will be enough to boost his standing in the polls to get him into the debates. But, then, that’s the hope of so many other candidates such as Bobby Jindal, Lindsey Graham, and Carly Fiorina, As it stands right now, there are going to be sixteen Republicans running for President by the end of July and only ten spots available in each of the two first debates. This is going to be like a really boring version of Survivor.