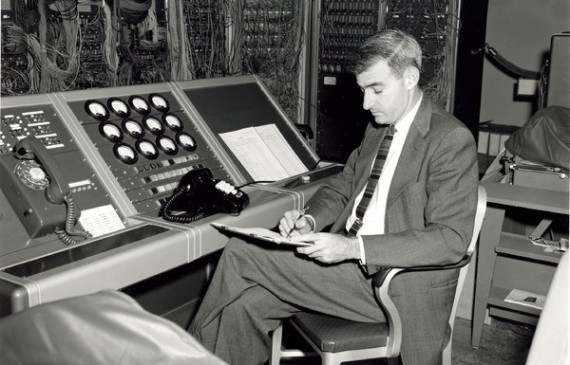 A generation ago, when the poetry of PEnnsylvania and BUtterfield was about to give way to telephone numbers in unpoetic strings, a critical question arose: Would people be able to remember all seven digits long enough to dial them?

And when, not long afterward, the dial gave way to push buttons, new questions arose: round buttons, or square? How big should they be? Most crucially, how should they be arrayed? In a circle? A rectangle? An arc?

For decades after World War II, these questions were studied by a group of social scientists and engineers in New Jersey led by one man, a Bell Labs industrial psychologist named John E. Karlin.

By all accounts a modest man despite his variegated accomplishments (he had a doctorate in mathematical psychology, was trained in electrical engineering and had been a professional violinist), Mr. Karlin, who died on Jan. 28, at 94, was virtually unknown to the general public.

But his research, along with that of his subordinates, quietly yet emphatically defined the experience of using the telephone in the mid-20th century and afterward, from ushering in all-digit dialing to casting the shape of the keypad on touch-tone phones. And that keypad, in turn, would inform the design of a spate of other everyday objects.

“He was the one who introduced the notion that behavioral sciences could answer some questions about telephone design,” Ed Israelski, an engineer who worked under Mr. Karlin at Bell Labs in the 1970s, said in a telephone interview on Wednesday.

In 2013, the 50th anniversary of the introduction of the touch-tone phone, the answers to those questions remain palpable at the press of a button. The rectangular design of the keypad, the shape of its buttons and the position of the numbers — with “1-2-3” on the top row instead of the bottom, as on a calculator — all sprang from empirical research conducted or overseen by Mr. Karlin.

The legacy of that research now extends far beyond the telephone: the keypad design Mr. Karlin shepherded into being has become the international standard on objects as diverse as A.T.M.’s, gas pumps, door locks, vending machines and medical equipment.

Mr. Karlin, associated from 1945 until his retirement in 1977 with Bell Labs, headquartered in Murray Hill, N.J., was widely considered the father of human-factors engineering in American industry.

A branch of industrial psychology that combines experimentation, engineering and product design, human-factors engineering is concerned with easing the awkward, often ill-considered marriage between man and machine. In seeking to design and improve technology based on what its users are mentally capable of, the discipline is the cognitive counterpart of ergonomics.

“Human-factors studies are different from market research and other kinds of studies in that we observe people’s behavior and record it, systematically and without bias,” Mr. Israelski said. “The hallmark of human-factors studies is they involve the actual observation of people doing things.”

Among the issues Mr. Karlin examined as the head of Bell Labs’ Human Factors Engineering department — the first department of its kind at an American company — were the optimal length for a phone cord (a study that involved gentle, successful sabotage) and the means by which rotary calls could be made efficiently after the numbers were moved from inside the finger holes, where they had nestled companionably for years, to the rim outside the dial.

An early experiment involved the telephone cord. In the postwar years, the copper used inside the cords remained scarce. Telephone company executives wondered whether the standard cord, then about three feet long, might be shortened. Mr. Karlin’s staff stole into colleagues’ offices every three days and covertly shortened their phone cords, an inch at time. No one noticed, they found, until the cords had lost an entire foot.

From then on, phones came with shorter cords.

Mr. Karlin also introduced the white dot inside each finger hole that was a fixture of rotary phones in later years. After the phone was redesigned at midcentury, with the letters and numbers moved outside the finger holes, users, to AT&T’s bewilderment, could no longer dial as quickly.

With blank space at the center of the holes, Mr. Karlin found, callers no longer had a target at which to aim their fingers. The dot restored the speed.

In 1946, a Bell Labs engineer, Rudolph F. Mallina, had patented an early model, with buttons arranged in two horizontal rows: 1 through 5 on top, 6 through 0 below. It was never marketed.

By the late 1950s, when touch-tone dialing — much faster than rotary — seemed an inevitability, Mr. Karlin’s group began to study what form the phone of the future should take. Keypad configurations examined included Mr. Mallina’s, one with buttons in a circle, another with buttons in an arc, and a rectangular pad.

The victorious design, based on the group’s studies of speed, accuracy and users’ own preferences, used keys half an inch square. The keypad itself was rectangular, comprising 10 keys: a 3-by-3 grid spanning 1 through 9, plus zero, centered below. Today’s omnipresent 12-button keypad, with star and pound keys flanking the zero, grew directly from this model.

Putting “1-2-3” on the pad’s top row instead of the bottom (the configuration used, then as now, on adding machines and calculators) was also born of Mr. Karlin’s group: they found it made for more accurate dialing.

By the postwar period, telephone exchanges that spelled pronounceable words were starting to be exhausted. All-digit dialing would create a cache of new phone numbers, but whether users could memorize the seven digits it entailed was an open question.

Mr. Karlin’s experimental research, reported in the popular press, showed that they could. As a result, PEnnsylvania and BUtterfield — the stuff of song and story — began to slip away. By the 1960s, those exchanges, along with DRexel, FLeetwood, SWinburne and scores of others just as evocative, had all but disappeared.

It’s amazing how many of these design choices we simply take for granted as obvious. It had never occurred to me that the numbers on a calculator and a telephone were arranged differently.