The Obama Administration took some fire yesterday for recent Ambassadorial Appointments, but the President's record has been consistent with those of his recent predecessors. 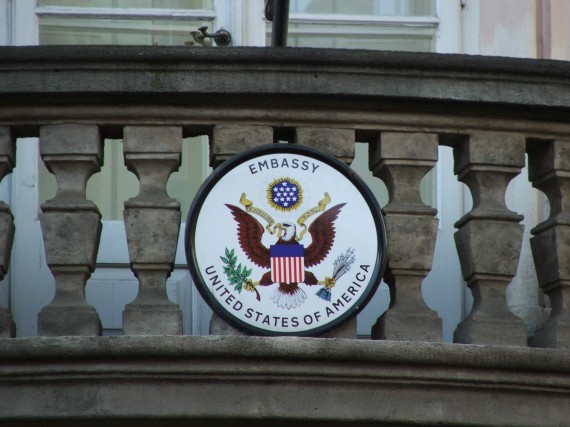 As it moved forward on backlogged nominations yesterday, the Senate approved the nomination of Colleen Bell to be the next U.S. Ambassador to Hungary, and that didn’t make John McCain happy at all:

The Senate confirmed a producer of the soap opera “The Bold and The Beautiful” today to serve as ambassador to Hungary, and Sen. John McCain is not happy about it.

Prior to the vote, McCain, R-Ariz., went on a tirade about how Colleen Bradley Bell, a soap opera producer and bundler for President Obama’s campaigns, is “unqualified” to represent the United States as an ambassador to Hungary.

“We’re about to vote on a totally unqualified individual to be ambassador to a nation which is very important to our national security interest,” McCain said on the Senate floor. “Her qualifications are as a producer of the television soap opera ‘The Bold and The Beautiful,’ contributed 800,000 [dollars] to Obama in the last election and bundled more than $2.1 million for President Obama’s re-election effort.”

“I am not against political appointees … I understand how the game is played, but here we are, a nation [Hungary] that is on the verge of ceding its sovereignty to a neo-fascist dictator getting in bed with Vladimir Putin and we’re going to send the producer of ‘The Bold and The Beautiful’ as the ambassador,” McCain continued. “I urge my colleagues to put a stop to this foolishness. I urge a no vote.”

Regardless of McCain’s urging, the Senate confirmed Bell to the ambassador post with a vote of 52-42.

McCain’s displeasure with Bell’s qualifications stems from a contentious confirmation hearing earlier this year when multiple ambassador nominees bungled questions from senators. In her questioning with McCain, Bell struggled to name the U.S. strategic interests in Hungary. Here’s an excerpt from the hearing:

MCCAIN: So what would you be doing differently from your predecessor, who obviously had very rocky relations with the present government?

BELL: If confirmed, I look forward to working with the broad range of society —

MCCAIN: My question was, what would you do differently?

BELL: Senator, in terms of what I would do differently from my predecessor, Kounalakis —

MCCAIN: Obviously, you don’t want to answer my question.

If anything good can be said about Bell’s response here, it is that at least she didn’t struggle with having to respond about the last time she had actually visited the nation that she would be serving as the diplomatic face of the United States like the proposed Ambassador to Argentina did earlier this year:

The White House, meanwhile, seemed to struggle to explain just how Bell is qualified to serve in the position she has not been confirmed to:

It’s not every day that White House has to defend its decision to nominate a soap opera producer to represent the country on one of the highest diplomatic levels.

But it was that kind of Tuesday.

Asked at the daily press briefing what makes “The Bold and The Beautiful” producer Colleen Bell qualified to serve as U.S. Ambassador to Hungary, White House spokesman Josh Earnest didn’t exactly have an explanation.

“(She’s) somebody who obviously has succeeded in, you know, in the business world,” Earnest said.

“And she is somebody that the President has confidence will be able to maintain our relationship with the government and the people of Hungary.”

Earnest also denied that Bell’s hand in raising millions of dollars for the President’s re-election campaign had anything to do with her appointment.

“Well, I can tell you that that’s not the reason she was chosen,” he said.

Earnest said the reason Bell was nominated for the post was because the President “has complete confidence in her ability to represent the United States in that country.”

Here’s video of that portion of the White House press briefing:

The truth, of course, is that Bell’s appointment is just another example of a very old game in Washington in which campaign donors and friends of the President end up getting rewarded with largely symbolic positions on government commissions or appointments to Ambassadorial positions, usually in countries that are now among the more important when it comes to world affairs. Not surprisingly, these end up being nations where the duties of the Ambassador end up being largely ceremonial and U.S. relations with the country in question are sufficiently solid that sending what amounts to a symbolic appointment to be the nation’s chief diplomatic representative would not be seen as an insult. A quick Google search this morning, for example, yielded some interesting results from the American Foreign Service Association, which has cataloged every Ambassadorial appointment from Presidents Gerald Ford through President Obama (to date, obviously) and grouped those appointments into “career” appointments, meaning that the appointee came from within the career foreign service and “political” which they means they came from outside, and found this:

On average, these numbers show that Presidential Ambassadorial appointments have come from the career Foreign Service roughly 67.54% of the time and from “political” appointments roughly 32.54% of the time. Among Presidents who have served a full eight years in office, the average has been 68.05% career appointees and 31.95% “political” appointees. Not all of these political appointees have been donors or buddies of the President, of course, but many of them have. The U.S. Ambassador to Mexico during much of the Reagan Administration, for example, was John Gavin, a former Hollywood actor who was close to Reagan personally. The U.S. Ambassador to the Bahamas during a good portion of the Clinton Administration was Sidney Williams, a former professional football player who also happens to be the husband of Congresswoman Maxine Waters. The Ambassador to Belize during George W. Bush’s second term was Robert Dieter, the President’s former roommate at Yale. So, yes, Bell’s appointment to the Ambassadorship in Hungary is political, but that’s not unusual given recent history and President Obama’s “political” v. career appointment ratio isn’t all that different from the recent historical norm.

On some level, I suppose, one can lament the fact that any of these Ambassadorships are being handed out for political reasons, but this is, for better or worse how things have always been done and it doesn’t really seem to have had any impact on how foreign policy is conducted. One reason this is the case is that, by and large, a look at the lists I’ve linked above shows that the appointments to nations that would have been considered important at the given time were almost exclusively from among the career Foreign Service. This makes sense because, to the extent the pool of such candidates is limited, you’d want to use them on the nations where a direct relationship between the Ambassador and the people in charge is important, or where it calls for someone who can navigate diplomatic minefield. In other parts of the world, where the Ambassador is as much a goodwill face of the nation and someone who exists to promote good relations and trade, much of those duties can be carried out at the sub-Ambassadorial level, where the positions are indeed filled with people with Foreign Service experience. Additionally, now that we live in a world of near instant communications where the President, White House Chief of Staff, Secretary of State, or any other official can be put in contact with their counterpart anywhere in the world with relative ease, the role of the Ambassador has changed significantly from the what it was in the days of Thomas Jefferson and John Adams, or even from what it was in more recent decades. When officials in Washington can largely get in contact with whomever they need to whenever they want, the role of the person representing the nation in the capital city of another nation is naturally going to become far less diplomatic in the formal sense, and far more akin to the role of a cultural, trade, and tourism Ambassador. This, along with the the tremendous goodwill that the Japanese people still have for John F. Kennedy, for example, is a good reason why Caroline Kennedy’s appointment as Ambassador to Japan a few years back was not very surprising. Japan remains an important ally, of course, but the role of the Ambassador has changed given modern technology and all of the other ties between Washington and Tokyo. That’s not to say that technology has made Ambassadors superfluous, of course, but tings have changed enough that we may start to see more “political” appointments in the future than we have in the past. After all, if Ambassador is basically just becoming a symbolic position, then its far less important to have experienced diplomats fill those roles.