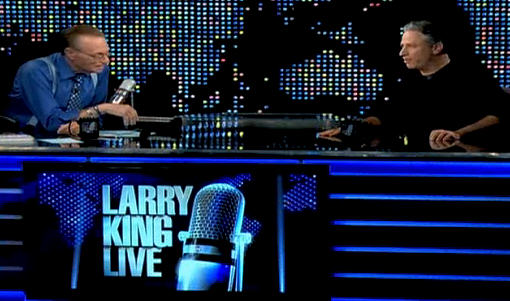 Jon Stewart goes on “Larry King Live” to discuss his upcoming rally and why CNN sucks so much.   Breaking news:  They will have toilets available at the rally.

YouTube has the full video but, oddly, won’t permit embedding.

Jon Stewart was on Larry King Live last night, and didn’t let the fact that he was on CNN deter him from criticizing the network. He said to King, who is leaving CNN, “you’re the last guy out of a burning building.”

When King asked later why Stewart picks on CNN so much, Stewart replied that it’s because “you’re terrible.”

[…]King also asked about Stewart’s upcoming “Rally To Restore Sanity” in Washington, D.C. on October 30, which NPR has barred its employees from attending. “As a countermeasure against NPR, to fight back,” Stewart said, “I have prohibited my employees from describing events in esoteric terms.”