Julian Assange One Step Closer To Extradition To Sweden 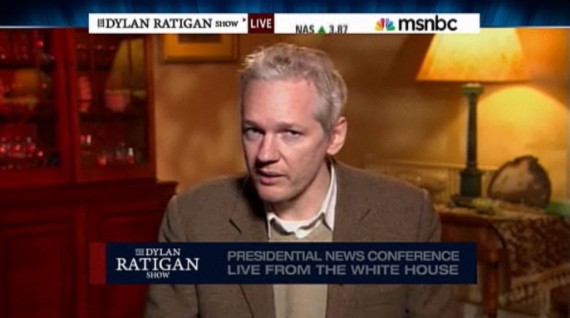 The legal options for Wikileaks founder Julian Assange, currently under house arrest in Britain while he fights an effort to extradite him to Sweden to face a rape charge, appear to be running out:

LONDON — Britain‘s highest court ruled on Wednesday that the WikiLeaks founder, Julian Assange, should be deported to Sweden to face allegations of sexual abuse there, but Mr. Assange’s lawyers won an immediate stay of at least two weeks before British officials can initiate the final steps to hand him over to Stockholm.

In what had been billed as the culmination of an 18-month legal battle, the Supreme Court ruled by a 5-to-2 vote to reject Mr. Assange’s argument against extradition. The decision was delivered in a court hearing lasting barely 10 minutes by Nicholas Phillips, the 74-year-old president of the court, in one of his last major decisions before retirement this fall.

Mr. Assange, who was delayed by heavy traffic, was not present for the decision, but there was an audible sigh of disappointment from WikiLeaks supporters in the courtroom as the ruling was read. That anxiety appeared to relent somewhat as Dinah Rose, one of Mr. Assange’s lawyers, rose to request a two-week delay in implementation of the decision, saying the court appeared to have made its ruling on a fine point of European law that had not been raised by either side at an earlier Supreme Court hearing on the case.

In granting that request and agreeing to consider a new submission from Mr. Assange’s lawyers, the court effectively opened, at least for now, a fresh opportunity for Mr. Assange to delay — and what legal experts said was a narrow and improbable chance to avoid — his forcible removal to Sweden for at least several weeks.

The delay in settling the extradition case in Britain appeared likely to put back indefinitely any moves the United States may have in hand to open a new round of extradition hearings to transport Mr. Assange to the United States to face charges for his role in overseeing the release by WikiLeaks over the last two years of hundreds of thousands of secret American military and diplomatic cables.

There have been frequent but unconfirmed reports for much of that time that a grand jury in Alexandria, Va., has been considering a Justice Department bid to charge Mr. Assange with espionage. Leaked e-mails from the global intelligence company Stratfor earlier this year suggested that a sealed indictment was ready to be made public when American officials judge that legal proceedings against Mr. Assange in Britain and Sweden are coming to a close.

Of course, that sealed indictment means that American prosecutors could wait until after Assange’s legal status in Sweden is settled before seeking extradition. Nonetheless, the legal noose does appear to be tightening.