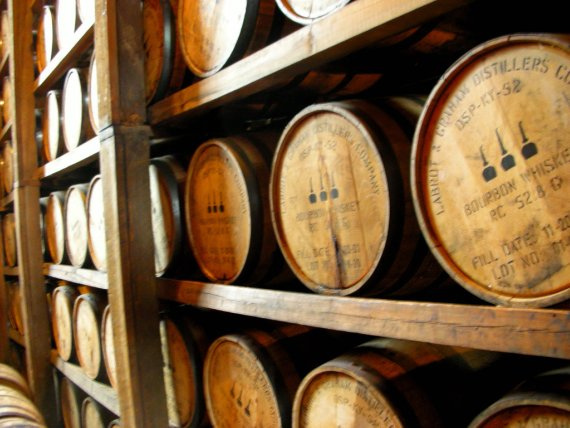 LOUISVILLE  – 62 year old Mickey Nilsson of Bardstown Kentucky, finally found a way to make his tinkering hobby pay off.  Inspired by the film Chitty Chitty Bang Bang, Nilsson transformed a collection of “junk” into a motor vehicle that does not rely on foreign oil as it’s fuel source. His car is entirely powered by Kentucky Bourbon Whiskey.

“I was always a fan of Caractacus Potts (the Dick Van Dyke character) from Chitty Chitty Bang Bang” said Nilsson. “He was pretty good at re-purposing junk. Always admired that”.  Nilsson had his fair share of junk too. Most of it was just rusting when last October he had a knock at his door.

“Them two knuckleheads from that TV show American Pickers (Mike Wolfe and Frank Fritz) stopped by here trying to steal from me. Offering me $200 for my old still. Said I had no use for it since making moonshine was illegal. After that smart-mouthed remark, I shot at em” declared Nilsson. “Although I did sell the chubby one with the beard an old oil can for $40 before they ticked me off.”

The visit did motivate Nilsson. “After I’d run them off, I kept thinking about what they kept saying to me, ‘what are you going to do with all this stuff, you might as well sell it to us’. Well that left me pondering. Folks around these parts do a lot of pondering, so it wasn’t really nothing new for me as I ponder about something almost everyday. But this time my pondering gave me an idea, watch Chitty Chitty Bang Bang.”

Inspired and motivated by the film, Nilsson spent the next 6 months, in his workshop turning his one-time still and collection of junk into a whiskey sipping motor vehicle. “The car will run on almost any bourbon, but she really purrs on Maker’s Mark” said Nilsson.

Of course, that doesn’t really save you much money at the moment:

With Maker’s Mark currently at an average selling price of $24 a fifth it’s likely most owners of the new vehicle would fill her up with Old Crow or even Old Grand Dad. Either way, it’s still a pricier fuel option, but before long it may be a bargain. Gasoline prices have been skyrocketing, jumping 50% in the past year. This week the cost for regular gas eclipsed milk and the popular Arnold Palmer Iced Tea-Lemonade beverage per gallon.