An Iraqi militant group has beheaded its South Korean hostage, al Jazeera television reported Tuesday, just hours after a go-between said the execution had been delayed and there were negotiations for the man’s release.

The South Korean foreign ministry issued a statement confirming that Kim Sun Il had been killed but did not say he was beheaded. Kim’s body was found by the U.S. military between Baghdad and Fallujah, 22 miles west of the capital, at 5:20 p.m. Iraq time, said South Korean Foreign Ministry spokesman Shin Bong-kil. The South Korean embassy in Baghdad confirmed that the body was Kim’s by studying a picture of the remains it received by e-mail, Shin said. “It breaks our heart that we have to announce this unfortunate news,” Shin said.

Kim, 33, worked for Gana General Trading Co., a South Korean company supplying the U.S. military in Iraq. He was abducted last week, according to the South Korean government.

The videotape of Kim, apparently made shortly before his death, showed him kneeling, blindfolded and wearing an orange jumpsuit similar to those issued to prisoners at Guantanamo Bay, Cuba. Five hooded men stood behind Kim, one reading a statement and gesturing with his right hand. Another captor had a big knife slipped in his belt. One of the masked men said the message was intended for the Korean people. “This is what your hands have committed. Your army has not come here for the sake of Iraqis, but for cursed America.” The video as broadcast did not show Kim being executed.

Al-Jazeera said the video claimed the execution was carried out by the al Qaeda-linked group Monotheism and Jihad.

News of the apparent beheading reached the White House in the midst of a briefing by spokesman Scott McClellan, who said he was not aware of the report.
“That would be horrible news,” McClellan said. “There simply is no justification for those kinds of atrocities that the terrorists carry out. We’ve seen some of the barbaric nature of the terrorists recently when it comes to an American citizen that was killed in Saudi Arabia and it is a reminder of the true nature of the terrorist.”

Al-Jazeera did not say when Kim was killed. Kim’s kidnappers had initially threatened to kill him at sundown Monday unless South Korea canceled a troop deployment to Iraq. The Seoul government rejected the demand, standing firm with plans to dispatch 3,000 soldiers starting in August.

Kim Chun-ho, president of Gana General Trading, the company that employed the victim, were traveling to the site to collect the remains, Shin said.

NKTS, a South Korean security firm doing business in Iraq, told the AP in Baghdad earlier Tuesday that Kim was still alive and that negotiations for his release continued, with the company president expected to arrive in Baghdad from Seoul by Wednesday. 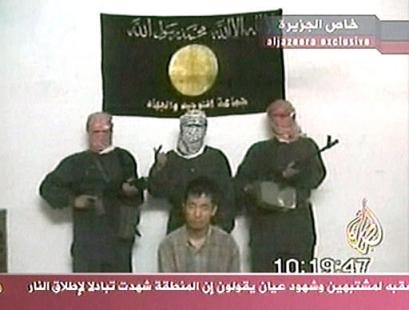 A man identified as South Korean Kim Sun-il, front, sits in front of his captors in this image taken from an undated but recent video obtained by Al-Jazeera television station Sunday, June 20, 2004. In the video, a group calling itself Monotheism and Jihad said that Korea had 24 hours to meet its demands of the withdrawal of Korean troops from Iraq (news – web sites), or they would kill Kim Soong Il. (AP Photo/Al-Jazeera via APTN)

On Monday, the deputy foreign minister of South Korea, Choi Young Jin, said that his government would not change its plan to send 3,000 soldiers to Iraq despite the kidnapping. The minister made the announcement after government officials held an emergency meeting to discuss the abduction. “There is no change in the government’s spirit and position that it will send troops to Iraq to help establish peace and rebuild Iraq,” Mr. Choi said at a news conference.

UPDATE: Video can be downloaded here.