Libya and the Intervener’s Dilemma

President Obama has pledged no slaughter and no ground troops for Libya. He may well be forced to pick one. 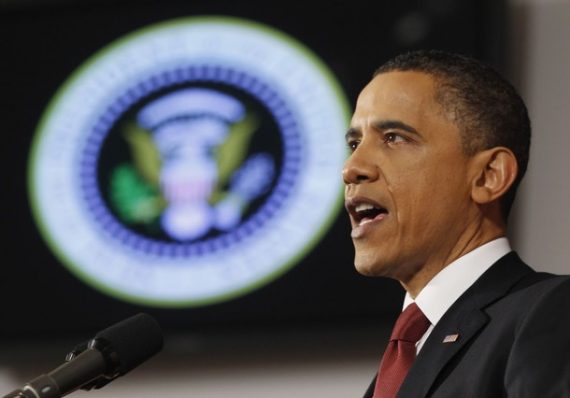 Kevin Drum says he backed Barack Obama over Hillary Clinton because he had greater faith in the former’s judgment, especially on the matter of kinetic interventions. Alas, that confidence is being sorely tested.

Obama has been a disappointment on civil liberties and national security issues, but since I frankly don’t think any modern president can buck the national security establishment in any significant way, I haven’t held that too deeply against him. The escalation in Afghanistan has been unfortunate too, but he did warn us about that.

There was never a chance that any president, liberal or otherwise, was going to intervene in Iran or in Egypt. Nor were interventions in places like the Congo or the Ivory Coast ever genuinely a possibility. Libya has been Obama’s first real opportunity to make a decision on a new overseas military operation, and within days of making his choice it’s already started to spiral. First he resisted intervention. Then he agreed to a no-fly zone. The no-fly zone turned into a Kosovo-style air campaign in support of the rebels. On Wednesday we learned that the CIA has advisors on the ground. And the administration has made it clear that providing arms to the rebels is under serious consideration too. Given that Muammar Gaddafi appears quite capable of holding out, or even outright winning, against even this, how likely is it that Obama will accept a stalemate or a loss and not escalate even further? Not very, I’d say.

I agree, down to the comma, with every bit of that.

There’s an elite consensus in American foreign policy that pushes presidents of both parties into certain conflicts and keeps them out of others. But the urge to “do something” when it looks relatively easy continues to lead us into adventures that actually aren’t easy at all. Bosnia, Kosovo, and now Libya all featured the prospect of massive atrocities if we didn’t act and relatively low risk for our forces. But, as we should have learned over the past two decades—but clearly haven’t—simply taking out the bad guys’ air power and blowing up a few tanks doesn’t end the problem; it merely transforms it into a tougher one.

Having bought into Libya, we’re in it. As best I can tell, the strategy is to hope that somehow, some way, Gaddafi is removed from power.

Like Walt Slocombe, I’m deeply skeptical that it’ll happen without substantial escalation. Gaddafi’s air force, such as it is, was disabled very early in the operation, so the no fly zone is a moot point. But the ragtag opposition clearly is inadequate to win on the ground against a disciplined, trained force. So, unless the military revolts against Gaddafi—and we’re seeing little sign of that—he’s likely to prevail if NATO remains relatively neutral. And that means continued atrocities by Gaddafi’s forces and, presumably, a prolonged guerrilla insurgency of the sort predicted by Steven Metz.

My strong guess is that this outcome will be unacceptable to the Big 3. Obama, the most reluctant to join the fight, now seems the most eager to take sides in the civil war. Given how unpalatable a stalemate would be, Nicolas Sarkozy and David Cameron would be likely to go along.
Simply giving better weapons to untrained “rebels,” however, is unlikely to do much beyond getting more people killed. And Obama has been adamant that US ground forces will not be used. So, either someone else will have to be found to do the fighting—and there are no ready candidates—or Obama will have to break one or the other promise. Having put American prestige—to say nothing of his own—on the line, there’s not much doubt which he’ll choose.
Photo credit: Reuters Pictures.
FILED UNDER: Middle East, World Politics, Afghanistan, Barack Obama, Big 3, CIA, Civil Liberties, David Cameron, Egypt, Hillary Clinton, Iran, Ivory Coast, Kevin Drum, Kosovo, Libya, Muammar Gaddafi, NATO, Nicolas Sarkozy, Reuters