Apropos my previous post about the Chicago public employee furlough, Aaron Brazell tweets about a Maryland judge ruling that state furloughs violate the U.S. Constitution.   He links to a WaPo recap:

A federal judge ruled Tuesday that Prince George’s County violated the U.S. Constitution when it furloughed 5,900 workers in the last fiscal year, a decision that could force the county to repay millions in wages in the midst of a crippling economic downturn.

The ruling, which the county plans to appeal, has the potential to upend a key Prince George’s strategy for combating deficits. A county spokesman said in a statement that the decision would result in “massive layoffs” if it stands.

“As a result of this [economic] crisis, the county made a difficult decision to furlough its employees for 10 days, saving $17 million,” James P. Keary, spokesman for County Executive Jack B. Johnson (D), said in the statement. “The court has substituted its judgment without acknowledging the economic challenges facing the country. . . . In order to protect their jobs and the lives of employees and their families we will be filing an appeal to remedy this irresponsible decision.”

But U.S. District Judge Alexander Williams Jr. wrote that although he is mindful that local governments are facing financial challenges “in the midst of a global recession,” officials could have turned to other “more moderate alternatives” to trim the budget.

“Although the County suggests to the Court that it faced dire circumstances and had no other reasonable alternatives, the record suggests otherwise and the County’s actions resemble trappings of doing that which was politically expedient,” Williams wrote in his 43-page opinion.

After reading the piece, I had a Whiskey Tango Foxtrot moment.  The Constitution is pretty short and I’ve not only read it and studied it, I’ve taught courses about it.  I couldn’t recall anything in the document that seemed remotely related to furloughs.

One has to read far down into the piece to get this:

In his opinion, Williams sided with the unions on one of three counts, finding that the county violated the contract clause of the U.S. Constitution, which bars states from passing laws “impairing the obligation of contracts.”

The furloughs reduced employees’ “salaries/wages and hours,” which were guaranteed under contracts “not subject to unilateral adjustment by the County,” Williams wrote. “To find otherwise would render the contracts virtually meaningless.”

No State shall … pass any … Law impairing the Obligation of Contracts.

That’s the entirety of the section. As always, FindLaw’s Annotated Constitution is the go-to resource for a quick synopsis of the judicial findings related to the provision.  The murkiness of the law here shows it to be perhaps the most poorly crafted bit of the Constitution.  Very quickly, the Supreme Court ruled that “No law” does not in fact mean no law.  (My undergraduate ConLaw prof, Dr. Hope Davis, suggested that the Framers should have written “No law, damn it” to be more clear.)

I don’t have any specific knowledge of the contract between Maryland/PG County and its workers and presume that Judge Williams’ ruling is correct.  (Note: In the eyes of the law, cities and counties are mere instruments of the states and their actions are considered that of their state government for the purposes of Constitutional interpretation.)   To show how hard his job was, consider just this snippet of summary from FindLaw:

Also, an express contract between the State and an individual for the performance of specific services falls within the protection of the Constitution. Thus, a contract made by the governor pursuant to a statute authorizing the appointment of a commissioner to conduct, over a period of years, a geological, mineralogical, and agricultural survey of the State, for which a definite sum had been authorized, was held to have been impaired by repeal of the statute. But a resolution of a local board of education reducing teachers’ salaries for the school year 1933-1934, pursuant to an act of the legislature authorizing such action, was held not to impair the contract of a teacher who, having served three years, was by earlier legislation exempt from having his salary reduced except for inefficiency or misconduct. Similarly, it was held that an Illinois statute that reduced the annuity payable to retired teachers under an earlier act did not violate the contracts clause, since it had not been the intention of the earlier act to propose a contract but only to put into effect a general policy. On the other hand, the right of one, who had become a ‘permanent teacher” under the Indiana Teachers Tenure Act of 1927, to continued employment was held to be contractual and to have been impaired by the repeal in 1933 of the earlier act.

UPDATE: I should note that, for the purposes of political science courses (vice law schools) the focus on the Contracts Clause is on government’s power.   Mostly, then, we looked at a handful of cases that looked at the ability of a state to take action that had the effect of abrogating a private contract.  That states can’t “impair” contracts, apparently even implied contracts, they make with individuals is an interesting side story. 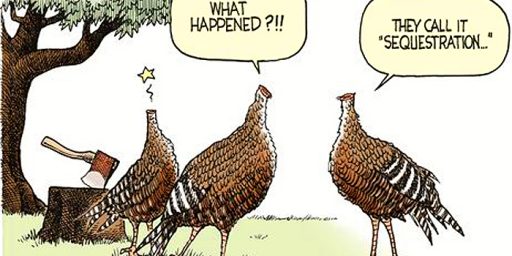