Mitch McConnell's campaign was forced to do a shakeup thanks to a scandal that could envelop Ron Paul's 2012 Presidential campaign. 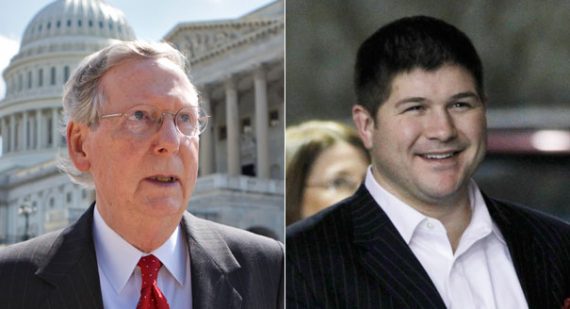 The re-election campaign of Senate Minority Leader Mitch McConnell was sent into something of a shock yesterday thanks to the sudden and somewhat unexpected announcement that Jesse Benton, who was managing his re-election and had manged Rand Paul’s 2010 campaign and Ron Paul’s 2008 and 2012 Presidential campaign, was resigning amid questions raised by a bribery scandal still unfolding in Iowa, was stepping aside with less than nine weeks to go until Election Day:

Jesse Benton, the campaign manager for U.S. Senate Minority Leader Mitch McConnell, will resign his post as a bribery scandal from the 2012 presidential campaign threatens to envelop Benton and become a major distraction for McConnell’s campaign.

Benton told the Herald-Leader that he met with McConnell on Friday afternoon and offered his resignation, which McConnell “reluctantly accepted.”

Benton said he offered his resignation, effective Saturday, with a “heavy heart.”

“This decision breaks my heart, but I know it is the right thing for Mitch, for Kentucky and for the country,” Benton said.

a statement provided first to the Herald-Leader, Benton said there “is no more important cause for both Kentucky, my new home I have come to love, and our country than electing Mitch McConnell Majority Leader of the United States Senate.”

“I believe this deep in my bones, and I would never allow anything or anyone to get in the way,” Benton wrote. “That includes myself.”

Benton said in his statement that “there have been inaccurate press accounts and unsubstantiated media rumors about me and my role in past campaigns that are politically motivated, unfair and, most importantly, untrue.”

But Benton said he found it more “troubling” that the rumors “risk unfairly undermining and becoming a distraction to this re-election campaign.”

“Working for Mitch McConnell is one of the great honors of my life,” Benton said. “He is a friend, a mentor and a great man this commonwealth desperately needs. I cannot, and will not, allow any possibility that my circumstances will affect the voters’ ability to hear his message and assess his record. This election is far too important and the stakes way too high.”

It was unclear Friday evening what effect Benton’s resignation and the circumstances surrounding it might have on McConnell’s campaign against Democrat Alison Lundergan Grimes, who is Kentucky’s secretary of state.

Stephen Voss, a political science professor at the University of Kentucky, said the resignation probably won’t have any immediate impact on McConnell’s campaign organization since Benton has played a less visible role than McConnell’s senior adviser, Josh Holmes, in recent months.

“Benton already served his role of helping McConnell appeal to the conservative base during the party primary, and a lot of campaign responsibilities had already passed from his shoulders,” Voss said.

“The problem with the scandal is the negative attention it brings to the McConnell campaign, which will come regardless of whether it turns out Benton really did anything wrong,” Voss said. “Any whiff of scandal within a campaign organization can bring criticism, because opponents suggest that it reflects on the judgment of the candidate who appointed the individual.”

I tend to agree that this incident is unlikely to have that much of an impact on McConnell’s campaign going forward. To a large degree, hiring Benton as his campaign manager was obviously a move by McConnell to forge an alliance with Kentucky’s junior Senator. In addition to managing Paul’s Senate campaign and both of his father’s recent Presidential campaigns, Benton is also married to Valori Payett, who happens to be Ron Paul’s granddaughter and Senator Paul’s niece. Given all of that, it has never been clear just how much Benton was actually running the campaign on his own, and how much he was basically just there as a figurehead. Indeed, this isn’t the first time Benton has gotten in trouble since going to work for McConnell; last year he was forced to deal with the public revelation of private comments he made that were quite critical of his boss. The allegations out of Iowa, which I’ll discuss in a bit more detail below, may have just been the last straw. In any case, McConnell seems to have moved quickly in naming senior adviser Josh Holmes as his new campaign manager.

The allegations that led to Benton’s resignation, meanwhile, involve a scandal in Iowa that is still unfolding. At its heart, it involves a Republican State Senator in the Hawkeye State who famously switched his allegiance from Michele Bachmann to Ron Paul on the eve of the Iowa Caucuses in 2012. At the time, and in the years that have followed there have been allegations of bribery and other illegal activities directed at both the Paul and Bachman campaigns. Earlier this week, the former State Senator in question, Kent Sorenson plead guilty to charges that he concealed payments from Paul’s campaign that coincided with his shift in endorsements.  By all accounts, this plea is in exchange for Sorenson’s cooperation in the ongoing Federal Grand Jury investigations which, according to Open Secrets, involve two separate Grand Juries aimed at the Bachmann and Paul campaign’s respectively. As the overall chairman of the Paul campaign in 2012, Benton would seem to be a natural person of interest in such an investigation, although it’s worth noting that nobody has made any allegation that either he or anyone involved in the national campaign was involved in anything that went on prior to Sorenson’s shift in loyalty. No doubt, though, the questions circling around the campaign were becoming a potential embarrassment for McConnell.

Where the Iowa investigation leads is hard to tell, but it seems likely that there will be more indictments to come. Stay tuned.

McConnell Campaign Manager: I’m Holding My Nose Working For Him