Senate Majority Leader Mitch McConnell has warned the President against using a national emergency to fund his border wall. 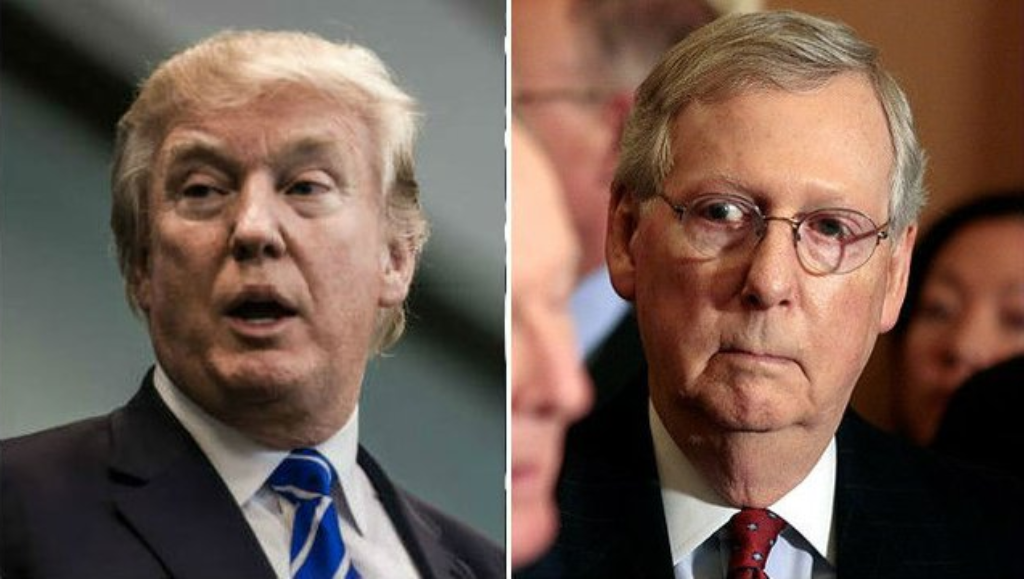 Senate Majority Leader Mitch McConnell is cautioning the President about following through on this threat to declare a national emergency to get his wall built even as the House and Senate continue to try to reach an agreement on a border security package:

Senate Majority Leader Mitch McConnell cautioned President Trump privately this week about the consequences of declaring a national emergency to build his border wall, telling him the move could trigger political blowback and divide the GOP, according to two Republicans with knowledge of the exchange.

McConnell (R-Ky.) told Trump that Congress might end up passing a resolution disapproving the emergency declaration, the people said — which would force the president to contemplate issuing his first veto ever, in the face of opposition from his own party.

McConnell delivered the message during a face-to-face meeting with the president Tuesday at the White House, according to the Republicans, who requested anonymity to describe the encounter. The two men met alone and conversed with no aides present. Their meeting was not publicly announced.

The majority leader’s comments to the president came amid rising GOP concerns over the fallout if Trump were to declare a national emergency that would allow him to circumvent Congress and use the military to build new stretches of wall along the U.S.-Mexico border. Trump increasingly appears prepared to take that route, saying Friday that “I think there’s a good chance we’ll have to do that.”

Trump teased the possibility of making a definitive statement on the topic during his State of the Union address, telling reporters to watch the Tuesday speech closely. “I think you’ll find it very exciting,” the president said.

And Trump again dismissed chances that he’ll get the $5.7 billion in wall funding he wants from a bipartisan congressional committee charged with producing a border security solution that could forestall another government shutdown. The committee is working to come up with a deal that could pass before Feb. 15, when a stopgap spending bill will expire if there is no action by Congress and Trump.

If the measure expires with no agreement, large portions of the federal government that reopened Jan. 25 after a record-long funding lapse would shut down again.

“We will be looking at a national emergency because I don’t think anything’s going to happen,” Trump told reporters at the White House. “I don’t think Democrats want border security.”

The White House did not immediately respond to a request for comment on Trump and McConnell’s meeting. A McConnell spokesman declined to discuss the senator’s private conversations.

On the same day he met with the president, McConnell publicly voiced his opposition to a national emergency declaration as he encouraged the 17-member congressional committee to find another way out of the impasse. “I’m for whatever works, which means avoiding a shutdown and avoiding the president feeling he should declare a national emergency,” McConnell said during his weekly news conference in the Capitol.

McConnell’s top deputy, Sen. John Thune (R-S.D.), told GOP senators at a private lunch that same day that if they had issues with the president’s declaring a national emergency, they should raise them with the White House, according to one of the Republicans and another person with knowledge of Thune’s comments, who spoke on the condition of anonymity to describe them.

The prospect of Trump’s using a national emergency declaration to build his wall has divided Republicans, with a number of them expressing concerns about the precedent that such a move would set.

Sen. John Cornyn (R-Tex.), a top McConnell confidant, said this week that he opposes an emergency declaration, in part because of what it might embolden a future Democratic president to do.

“We’ve certainly tried to communicate that to him,” said Cornyn, referring to Trump. “And so, he understands our concerns as we’ve expressed them. But I don’t know if he shares those same concerns.”

All of this comes at the end of a week in which the President has used several press appearances, as well as his Twitter feed, to basically declare that the ongoing negotiations were a waste of time and insinuating that he would declare a national emergency in an effort to get his wall built. While at least some of this seems to be Trump’s version of “tough talk” in anticipation of the course that negotiations might take, the rhetoric itself suggests that he is back at the same position he was prior to the start of the recently-concluded shutdown, specifically that he would not accept any outcome in which he didn’t get the full $5.7 billion he has been demanding for his border wall for the past two months. Realistically speaking, of course, there’s virtually no chance that this actually going to happen given the position that Democrats in the House and Senate have taken, and also taking into consideration the fact that there are clear signs that Republicans in the Senate have lost patience with the White House and are willing to try to reach a deal behind the President’s back even if it leads to a veto showdown in which the President would clearly be personally responsible for provoking a second shutdown.

In any case, if Trump does try to proceed through the “national emergency” route, there are two ways that he could face trouble.

On the legislative side, the President’s power to declare “national emergency” is governed largely by the National Emergencies Act of 1976. If Trump does intend to act pursuant to this law, that would set off a process in Congress that could lead to the President being prevented from acting at all. Pursuant to Section Five of the act, the House of Representatives has the right to repudiate the President’s declaration of an emergency via an immediate vote that the President would have no authority to stop. The resolution would then be sent to the Senate, which would be required to hold a floor vote on the declaration of an emergency within 15 days after receiving the resolution from the House. This would mean that Senate Majority Leader Mitch McConnell would be powerless to prevent a vote on such a resolution. Approval of the resolution would require just a simple majority. Trump using his emergency powers to attempt to make an end run around Congress would most certainly lead many in the Senate, including many Republicans, to object and this could lead to a sufficient number of defections from Republican ranks to approve the resolution and nullify the President’s attempt to make an end-run around the Constitution, the Rule of Law, and Congress.

Additionally, as I explained back in December, there is Supreme Court precedent suggesting that the power to act pursuant to a supposed “emergency” is not nearly as broad as the President seems to believe:

In 1952, while the United States was involved in the Korean War, steelworkers across the nation went on strike over wages and working conditions. The strike was so extensive that it essentially brought steel production in the country to a halt. In response, President Truman, purportedly acting in accordance with his emergency powers as President and Commander in Chief, seized control of the nation’s steel mills so that they could continue operating. As justification for his actions, the President cited the ongoing war in Korea and the fact that any halt in steel production would have an adverse impact on the ability of defense contractors to fulfill the orders placed by the Pentagon to keep troops in Korea supplied with weapons, ammunition, and other material.

Not surprisingly, the steel industry sued and, after an unusual expedited hearing, the Supreme Court ruled against the President and nullified his emergency orders directed toward the steel industry. In its decision in Youngstown Steel & Tube Co. v. Sawyer343 U.S. 579 (1952) the Court ruled that Truman had acted improperly and that he had neither the Constitutional authority nor the authorization from Congress to take the action that he did even if one assumes that the government was correct about the impact that the strike and subsequent closure of the steel mills would have on the ability of defense contractors to fulfill their obligations and, ultimately, on the war effort in Korea. While the reasoning supporting the majority opinion written by Justice Hugo Black was somewhat confused by the fact that there were no less than five concurring opinions from Justices Frankfurter, Douglas, Jackson, Burton, and Clark. In any case, the general tenor of the Court’s ruling was that the President does not possess the authority to take an end-run around Congress and the Constitution under the banner of declaring a “national emergency.”

While it might be uncertain what Congress would do in response to a declaration of a “national emergency,” it’s certain that there will be several lawsuits filed in connection with any such moves, including by California and perhaps other states that might be impacted by the decision. At the very least, the most likely immediate impact of those lawsuits would be an injunction that blocks the President from proceeding under his declaration at least on a temporary basis. Additionally, as noted the President faces the likelihood of a rebellious House and Senate that could seek to actually place some limits on Executive Branch authority. Assuming that Trump is serious about his threat to use his “national emergency” powers, then, he could find himself blocked on two fronts.