After a three-day trial, a jury of fellow ministers acquitted an Ellensburg, Wash., pastor of violating United Methodist Church law by living openly as a lesbian, saying the church has not clearly declared homosexuality to be incompatible with Christian teaching.

Yesterday’s verdict is a milestone for liberals in the church who want to reverse its ban on “self-avowed, practicing homosexuals” in the clergy, and it is a defeat for conservatives seeking to hold the line against the gay rights movement in the church and in secular society.

If the Rev. Karen Dammann had been convicted, she could have lost her job as pastor of the 200-member First United Methodist Church in rural Ellensburg and been permanently removed from the ministry.

Methodists on both sides of the issue predicted that the decision would reverberate through the 8.3 million-member denomination, much as the consecration of a gay bishop has embroiled the Episcopal Church in a debate between the authority of scriptural passages that condemn homosexuality and the desire to be an inclusive, tolerant religious community.

The not-guilty verdict “will be shocking to most United Methodists, because there is no question about what the Reverend Dammann is doing,” said the Rev. James V. Heidinger, president of Good News, a conservative renewal movement in the church. “It was assumed by most of us that we were just going through due process to make sure her rights were protected, but that she obviously was in violation of church law.

As a result, the jury had to weigh a series of carefully balanced phrases in the church’s legal code, the fruit of many hard-won legislative compromises. On one hand, the church’s Book of Discipline says that because “the practice of homosexuality is incompatible with Christian teaching, self-avowed practicing homosexuals are not to be accepted as candidates, ordained as ministers, or appointed to serve” as pastors.

On the other hand, it also says that sexuality is “God’s good gift to all persons,” that homosexuals “are individuals of sacred worth,” that “God’s grace is available to all,” and that “certain basic human rights and civil liberties are due all persons.”

The jury appears to have been swayed by a key witness for the defense, the Rev. Jack Tuell, a retired bishop of Los Angeles and expert on church law. He traced the history of all these phrases and argued that the General Conference has never been able to reach a definitive position condemning or condoning homosexuality.

Interesting. Offhand, I’d predict that the pews of Southern Baptist churches will be a little more crowded from now on.

A gay pastor has been acquitted in a church trial over her sexual orientation. The Rev. James C. Finkbeiner, who prosecuted the case, argued that [Rev. Karen] Dammann, by her own admission, is a practicing lesbian and that was all the jury needed to consider to find her guilty.

Unfortunately, it’s still that way in the general population as well.

Fortunately, the jury was comprised of better people that Rev. Finkbeiner and the people who brought the charges in the first place.

My understanding was that the trial wasn’t over her orientation, the CNN lede notwithstanding, but rather her conduct. If this is true: < blockquote>Church law prohibits the ordination of self-avowed, practicing homosexuals and the church’s Book of Discipline declares homosexuality to be “incompatible to Christian teachings.”

then Finkbeiner [What an unfortunate name! -ed.] would seem to be correct.

Frankly, the teachings of Christianity on this issue strike me as woefully outdated. My assessment of the faith has led me to reject it. The teachings cited in Dammann’s “defense” don’t say that the church finds homosexual sodomy meritorious, merely that God loves homosexuals like he does all sinners. But, surely, a minister should abide by the teachings of the church and go forth and sin no more. If one thinks Pope John Paul II is a really sweet man but is nothing more than that–as I do–then one is not a Catholic.

If one believes homosexuality is simply an orientation–as I do–and that living in a homosexual relationship is perfectly natural and wonderful for those so oriented, then one is simply not a Methodist. Trying to adjudicate such matters just furthers the impression that churches are no different from other social institutions, bowing to public pressure in order to preserve their status. If canonical teachings are subject to changing public opinion, then they are a farce.

Update: Gary Manca takes exception to my last update. I respond in his comments. 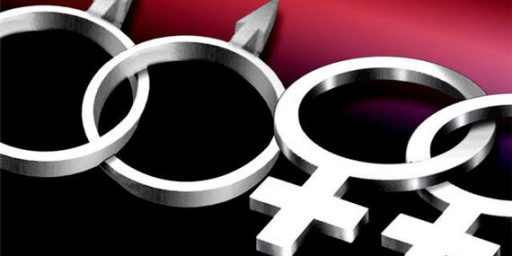