The Center for Defense Information has a very interesting report entitled, “Vital Statistics: The U.S. Military” (PDF-Adobe Reader required). They’ve done an excellent job of compiling data on U.S. defense spending over the years, how our military stacks up against others in the world, and what exactly the money is being spent on. 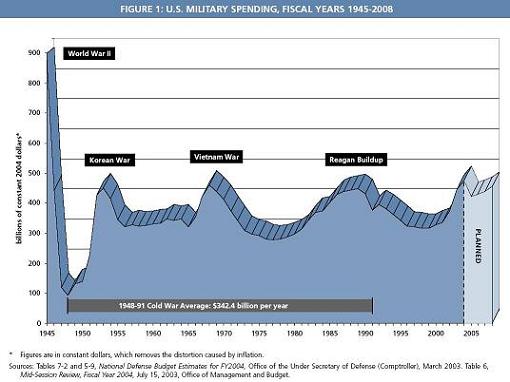 Our current defense budget is astronomical in absolute dollars. I would have guessed that we were spending at historical record levels even in real (inflation adjusted) dollars. Not so. The current budget is almost identical to those of the Korea, Vietnam, and Reagan buildup eras–and far below our World War II budget.

Whether we should be spending that kind of money in the current climate is certainly debatable. Indeed, CDI, which is a rather interesting organization–simultaneously rather dovish on defense issues and yet led primarily by retired generals and admirals, so unimpeachable as to motivation–argues that we should not:

The primary threat to U.S. security, however, is no longer massed Soviet forces, but rather small numbers of attackers who require neither billions or even millions of dollars, nor large conventional military forces, to wreak their havoc. Countering these attackers may require strengthening the diplomatic, economic, law enforcement, and informational tools of national security as much as massive funding of conventional military tools. President George W. Bush’s emphasis on overthrowing the “state sponsors” of terrorism does indeed require large conventional military forces and high spending, but unfortunately the administration’s reliance on such “preventive” wars, particularly with its unilateral approach, has inspired opposition, mistrust, and more hatred around the world, adding fuel to the terrorists’ cause.

Now, although the report is dated 7 January, it may well have been written before recent events in Libya, Iran, Pakistan, and North Korea that seem to point in the other direction.

It is quite probable that, had a few votes in Florida gone the other way in 2000 and Al Gore elected president, we wouldn’t be in Iraq right now. But my guess is that the defense-security budget would be quite comparable to what it is now. After 9/11, the demand would have been there to “do something” about the terrorism problem and a military solution would almost certainly have followed. And, surely, the level of threat posed by Islamic terrorism is at least comparable to that posed in 1950, 1965, and 1981.