Millennials Abandon Obama, at Least by Stupid Definition of ‘Abandon’

So, Dana Milbank has a column. 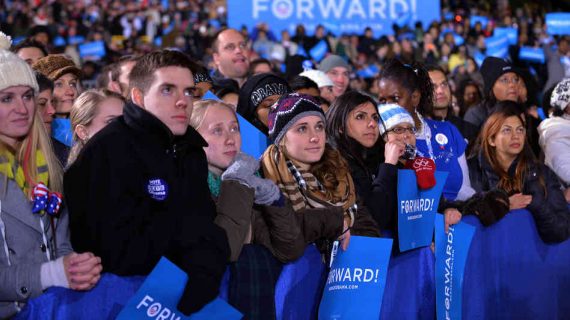 Dana Milbank‘s column headline “Why millennials have abandoned Obama” grabbed my attention in that there’s no evidence that they have.

The day before the Iowa caucuses in 2008, I wrote about the massive crowds of young people at Barack Obama rallies, noting that his candidacy would collapse “if they don’t show up.”

The next night, after Obama’s victory celebration in Des Moines, Obama strategist Steve Hildebrand spotted me in a crowd. “The kids showed up!” he said fiercely.

They did. But where are they now?

So . . . the evidence that the younger generation has “abandoned” Obama is that, whereas throngs of them showed up when he was a fresh-faced candidate offering hope and change at the tail end of eight years of Bush-Cheney, there are no crowds now that he’s a lame duck and, well, not running for anything?  Surely, that’s not the basis for a column.

An army of 15 million voters under 30 swept Obama past Hillary Clinton and John McCain and to the presidency in 2008. More than 12 million helped him return in 2012. But now his presidency is on the line — and the Obama youth are abandoning him in his hour of need.

What, exactly, is it that the president needs a little over a year into his final term?

The administration announced last week that only 1.08 million people ages 18 to 34 had signed up for Obamacare by the end of February, or about 25 percent of total enrollees. If the proportion doesn’t improve significantly, the result likely will be fatal for the Affordable Care Act.

The administration had said it needed 40 percent of registrants in the health insurance exchanges to be young adults, or about 2.7 million of the expected 7 million total. Overall enrollment is also below target. But the alarming shortcoming is the number of young participants, which would make the insured population older and sicker and the program too expensive.

First, it makes no sense whatsoever to assert that a generation has “abandoned” a leader on the basis of having twice voted for him overwhelmingly but then declining to buy some other product. If they’ve gone from being Obama loyalists to sending money to Marco Rubio or Ted Cruz, then I”m intrigued. But, not signing up for a program that costs money? Not so much.

Second, a full quarter of the enrollees in said program are in said generation.

Third, under Obamacare, those in the 18-27 demographic can stay on their parents’ insurance plans and thus have no need to sign up for Obamacare exchanges. And, of course, those with decent jobs will tend to have health coverage provided by their employers.

So . . . Milbank’s only evidence for “abandonment” is that the administration’s ideal generational breakdown for Obamacare exchange signups has not been achieved? Even though, I’m willing to bet, they were fully aware that their announced goals were wildly unachievable?

Having utterly failed to demonstrate his premise, Milbank goes on to explain the generational dynamics behind it.

What went wrong? The president and his aides failed to keep his youth movement engaged. But part of the problem also is the inability of the millennial generation to remain attached to a cause. The generation that brought Obama to power is connected online but has no loyalty to institutions — including, it turns out, the Obama White House.

In 2008, “the level of innovation and engagement in the election, especially the primaries, was amazing, but then the level of engaging them during the administration was extremely disappointing,” says Peter Levine, a Tufts University professor who specializes in youth civic involvement. “He had a potential army for legislative success and implementation, but the Obama administration did not do that. At a critical moment in the first term, they did not turn to them. . . . They got rapid youth demobilization.”

Young voters, after playing a big role in the campaign, became little more than an e-mail list for the White House and Obama’s Organizing for Action group. Then came health-care reform. The millennials, very liberal overall, saw Obama’s plan as too timid; they were disillusioned by his failure to fight for the “public option” of government-run health plans.

So, let’s get this straight: After getting elected, the president just went ahead and governed rather than continuing his campaign? Aside from being relatively untrue—he continued in campaign mode much moreso than any of his predecessors—it’s a bizarre charge. Especially with regards to Obamacare, which wasn’t really the president’s plan at all but a mishmash cobbled together in the vain hope of attracting bipartisan support.

Even if Obama had worked harder to keep his youth army engaged, it’s not entirely clear that the effort would have succeeded. As a group, the generation’s attachment is fickle.

A Pew survey of the generation, released earlier this month, found the 18-to-33 crowd less attached than older generations to organized politics and religion, less patriotic, less eager to marry and less trusting of people. Only 49 percent say the phrase “a patriotic person” describes them very well, compared to percentages ranging from 64 percent to 81 percent for older generations.

And it goes without saying that religious patriots are precisely the sort of people most apt to sign up for government healthcare exchanges.

The millennials are at least as passionate as earlier generations and more entrepreneurial, but they lack ties to institutions — unions, political parties, churches — because of their online existence. “The organizational structure they’re growing up in is so weak,” Tufts’ Levine tells me. As a result, “there aren’t very many durable institutions that can capitalize on their enthusiasm. They’re being asked to do it themselves, online, and it’s a tall order.”

Although it would seem to make them perfect candidates to sign up for healthcare online, no?