It looks like yesterday’s incident was only the beginning of what clearly seems to be an effort to provoke the Israelis into action that will embarrass them:

Activists vowed on Tuesday to try to break the Israeli blockade of Gaza with another ship, and an Israeli officer pledged to halt it, setting the stage for a fresh confrontation after Monday’s deadly clash.

The MV Rachel Corrie, a converted merchant ship bought by pro-Palestinian activists and named after an American woman killed in the Gaza Strip in 2003, set off on Monday from Malta, organizers said. It was carrying 15 activists including a northern Irish Nobel Peace laureate. “We are an initiative to break Israel’s blockade of 1.5 million people in Gaza. Our mission has not changed and this is not going to be the last flotilla,” Free Gaza Movement activist Greta Berlin, based in Cyprus, told Reuters.

An Israeli marine lieutenant, who was not identified, told Israel’s Army Radio his unit was prepared to block the ship.

“We as a unit are studying, and we will carry out professional investigations to reach conclusions,” the lieutenant said, referring to Monday’s confrontation in which his unit shot nine activists aboard a Turkish ferry.

“And we will also be ready for the Rachel Corrie,” he added.

Army Radio reported that the ship would reach Gazan waters by Wednesday, but Berlin said it might not attempt to reach Gaza until early next week.

“We will probably not send her till (next) Monday or Tuesday,” she said of the 1,200 tonne cargo ship. The Israeli navy stormed aboard a Turkish ferry leading a six-ship convoy on Monday, killing nine people in what authorities said was self-defence but sparking a world outcry, a crisis in diplomatic relations with Turkey and condemnation from the United Nations Security Council. The Rachel Corrie was carrying medical equipment, wheelchairs, school supplies and cement, a material Israel has banned in Hamas-ruled Gaza, organizers said.

Among the passengers on the Rachel Corrie is Mairead Corrigan-Maguire, co-winner of the Nobel Peace Prize in 1977.

To potentially inflame an already inflammatory situation, Turkey announced yesterday that more aid ships would be sent to Gaza accompanied by elements of the Turkish Navy. And Israel is saying that the next time a ship tries to run the blockade, they’ll use more force.

The addition of Turkey into the mix of the decades-long mess of Middle Eastern politics is a new, and potentially troubling, development especially to the extent that it serves as further evidence of the extent to which Turkey has drifted away from the secularism of Ataturk. Added into that is the fact that Turkey is a member of NATO and would apparently be entitled to invoke Article V of the NATO Treaty if its ships were attacked by Israel. While a shooting war of any kind between Israel and Turkey seems unlikely, and much of the rhetoric we’re hearing from both sides is just that, worsening of relations between the two states puts the United States in a very difficult position.

Ordinarily, this would be the point at which the United States would step in and cool the parties down. So, in some sense, the ball is in your court, President Obama.

UPDATE (James Joyner): This is indeed a messy situation but I think Steve Hynd’s fears of Article V being invoked are overblown.  First, the clear language of Article V specifies that the attack in question must take place “in Europe or North America.”  Second, I don’t think an attack pursuant to trying to bridge a naval blockage of someone else’s territory would generate much response, anyway. 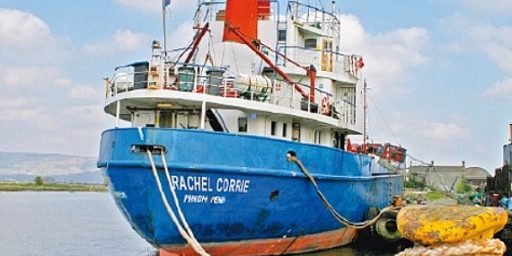