In fact, the great lesson of Iraq (further affirmed in Afghanistan) is that the umma — the Arabic name for the entire Muslim community — is all but impervious to change imposed from the outside. If anything, our ham-handed efforts to inculcate freedom and democracy, even if well-intentioned, have played into the hands of violent Islamic radicals. The Bush administration’s strategy has exacerbated the problem it was designed to solve, while squandering American lives, treasure, moral standing and political influence to little avail.

Given the mess in which we currently find ourselves, increasing the number of men and women under arms makes about as much sense as drinking bourbon to treat depression. In the short term, the antidote might make you feel better, but at a cost of masking the underlying problem and allowing it to fester.

The underlying problem is that the basic orientation of U.S. policy since 9/11 has been flat wrong. Bush’s conception of waging an open-ended global “war” to eliminate terrorism has failed, disastrously and irredeemably. Simply trying harder — no matter how many more soldiers we recruit and no matter how many more Muslim countries we invade and “liberate” — will not reverse that failure. More meddling will evoke more hatred.

THE CHALLENGE confronting those aspiring to the presidency, therefore, is to devise an alternative to Bush’s failed strategy. To pass muster, any such strategy will have to recognize the limits of American power, military and otherwise. It must acknowledge that because the United States cannot change Islam, we have no alternative but to coexist with it.

Yet coexistence should not imply appeasement or passivity. Any plausible strategy will prescribe concrete and sustainable policies designed to contain the virulent strain of radicalism currently flourishing in parts of the Islamic world. The alternative to transformation is not surrender but quarantine.

Bacevich is almost certainly right that, absent a ratcheting up of the war on terror to genocidal levels, we’re not likely to end the Islamist threat by force alone. Indeed, even the most enthusiastic neo-conservatives and staunchest supporters of President Bush (including, Bush himself) acknowledge this.

It’s far from clear, though, how we would impose a “quarantine” without “evok[ing] more hatred.” Indeed, the problem with the modern strain of global terrorism is that it’s so adaptable and seemingly immune to attack.

Yes, going into the Middle East with large concentrations of troops, killing people and breaking things, serves as a recruiting tool for al Qaeda and their ilk. At the same time, though, retreating with our tails between our legs will be seen–rightly so–as a victory for terrorism and further establish that as the most effective tactic against the West. Similarly, doing nothing in response to attacks with be seen as weakness, not compassion. It’s a vicious Catch-22 and there are no easy answers.

Jules Crittenden is rather too harsh, though, in saying that Bacevich’s ideas are “deserving of contempt.” He specifically rejects appeasement; he’s merely frustrated that the current policy does not appear to be working and is making a rather helpless cry for a diplomatic solution.

This, too, is unfair: “Bacevich has returned to past policy of not mentioning his personal involvement in Iraq. It is deceptive on the part of the LA Times to allow this.” Presumably, Crittenden is referring to the fact that Bacevich’s son was recently killed while serving in Iraq.* That’s, quite understandably, a touchy subject and there’s no obvious reason why it must be highlighted every time Bacevich writes about the war. For one thing, his record of opposing the war is long and predates his son’s assignment there.** For another, mentioning that in every piece would lead to charges that he’s using the death of his son for political purposes or that he is speaking as a grieving father rather than as a genuine expert in his field.

__________
*See “1LT Andrew Bacevich Killed in Iraq” (May 15).
**For example, in a November 2003 post I cited his observation, “I think it has to be unprecedented in U.S. military history to be engaged in a war of increasing intensity for this long a time and we really still don’t know who the enemy is.” 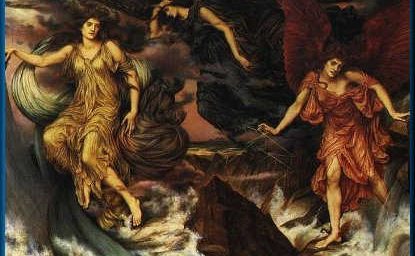