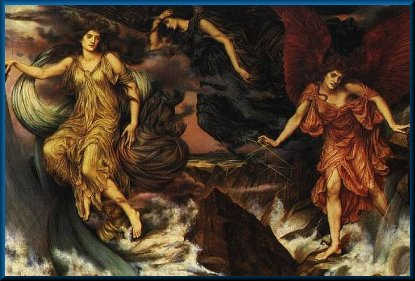 An otherwise unremarkable piece by Andrew Bacevich titled “How America conducts foreign policy” is creating quite a buzz on Twitter for this sentence:

Efforts to divine this administration’s intent in Libya have centered on the purported influence of the Three Harpies: Secretary of State Hillary Clinton, U.N. Ambassador Susan Rice, and National Security Council Human Rights Director Samantha Power, women in positions of influence ostensibly burdened with regret that the United States failed back in 1994 to respond effectively to the Rwandan genocide and determined this time to get it right.

He links the term to a truly bizarre Antiwar.com piece by Justin Raimondo titled “French Fraud Behind Libya War Drive.” It uses the phrase thusly:

I have to admit to being taken by surprise, because, as low as my opinion may be of President Obama, it was never that low. I never thought he would fall for Henri-Lévy’s line of guff, as regurgitated by the Three Harpies of the Libyan Apocalypse.

His link, in turn, goes to a John Avlon essay in The Daily Piece called “Libya Airstrikes: The Women Who Called for War.” Avolon does not use the term.

The phrase doesn’t appear in a non-Greek mythology context on the first page of Google. The only other instance in Google News is to a piece (“The Game of the Rich“) by a Mark Sashine on something called OEN: OpEdNews (ironically under the motto: Progressive. Tough. Liberal.)

I’ve had the occasional disagreement with Bacevich over public policy over the years but he’s a bright, accomplished man of unquestioned integrity. And the father of three daughters.  “Three Harpies” is not how such a man ought to being referring to talented women advising the president.

I have voiced both my admiration for and disagreements with Andrew Bacevich in the past, and I too chuckled at the things my mother used to tell me about how we would never go to war if women ruled the world, but what, I wonder, is Andrew Bacevich’s rationale for using the phrase “the Three Harpies” to describe Samantha Power, Susan Rice and Hillary Clinton? If three men convinced the president to go to war in Libya, would we be calling them “the Three Minotaurs?” By all means, let’s criticize the president’s decision to go to war in Libya, but I do not understand why so much of the discourse concerning the role played by three prominent women in the administration has been so sexist. Women make wise and poor national security decisions, men make wise and poor national security decisions. This focus on gender is silly, and using a term like “harpy” which carries the implication that there is something monstrous about the woman in question, is ugly.

Not to mention: It’s the only part of Bacevich’s essay anyone will be talking about.

Although: Ex’ use of the word “monster” as a substitute for “harpy” is somewhat amusing in this context, given that’s what Power called Clinton way back when.