Robert Mueller objected to the Attorney General's characterization of the final report he submitted, reports indicate.

Late yesterday, The New York Times reported that Robert Mueller sent a letter to Attorney General William Barr objecting to the Attorney General’s summary of Mueller’s final report to the Justice Department regarding his investigation into Russian interference in the 2016 election, potential collaboration between the Trump campaign or people associated with it and Russians, and allegations of obstruction of justice by the President and those around him:

WASHINGTON — Robert S. Mueller III, the special counsel, wrote a letter in late March to Attorney General William P. Barr objecting to his early description of the Russia investigation’s conclusions that appeared to clear President Trump on possible obstruction of justice, according to the Justice Department and three people with direct knowledge of the communication between the two men.

The letter adds to the growing evidence of a rift between them and is another sign of the anger among the special counsel’s investigatorsabout Mr. Barr’s characterization of their findings, which allowed Mr. Trump to wrongly claim he had been vindicated.

It was unclear what specific objections Mr. Mueller raised in his letter, though a Justice Department spokeswoman said on Tuesday evening that he “expressed a frustration over the lack of context” in Mr. Barr’s presentation of his findings on obstruction of justice. Mr. Barr defended his descriptions of the investigation’s conclusions in conversations with Mr. Mueller over the days after he sent the letter, according to two people with knowledge of their discussions.

Mr. Barr, who was scheduled to testify on Wednesday before the Senate Judiciary Committee about the investigation, has said publicly that he disagrees with some of the legal reasoning in the Mueller report. Senior Democratic lawmakers have invited Mr. Mueller to testify in the coming weeks but have been unable to secure a date for his testimony.

A central issue in the simmering dispute is how the public’s understanding of the Mueller report has been shaped since the special counsel ended his investigation and delivered his 448-page report on March 22 to the attorney general, his boss and longtime friend. The four-page letter that Mr. Barr sent to Congress two days later gave little detail about the special counsel’s findings and created the impression that Mr. Mueller’s team found no wrongdoing, allowing Mr. Trump to declare he had been exonerated.

But when Mr. Mueller’s report was released on April 18, it painted a far more damning picture of the president and showed that Mr. Mueller believed that significant evidence existed that Mr. Trump obstructed justice.

“The special counsel emphasized that nothing in the attorney general’s March 24 letter was inaccurate or misleading,” a Justice Department spokeswoman, Kerri Kupec, said in response to a request for comment made on Tuesday afternoon. A spokesman for the special counsel’s office declined to comment.

Over the past month, other signs of friction between the attorney general and the special counsel have emerged over issues like legal theories about constitutional protections afforded to presidents to do their job and how Mr. Mueller’s team conducted the investigation.

In congressional testimony in April before the report was released, Mr. Barr demurred when asked whether he believed that the investigation was a “witch hunt” — Mr. Trump’s preferred term. It “depends on where you’re sitting,” Mr. Barr replied.

“If you are somebody who’s being falsely accused of something, you would tend to view the investigation as a witch hunt,” he said, an apparent reference to the president.

Mr. Barr’s testimony stood in contrast to comments he made during his confirmation hearing in January. “I don’t believe Mr. Mueller would be involved in a witch hunt,” he said then.

A rift between the men appeared to develop in the intervening months as the special counsel wrapped up his inquiry.

The Justice Department received Mr. Mueller’s letter four days after Mr. Barr sent his conclusions to Congress. In response, the attorney general and the special counsel spoke on the phone, and Mr. Mueller laid out his concerns about the initial descriptions of the report.

At the time, the Justice Department had begun redacting the report and

Mr. Mueller raised the question about whether more of it could be released.

“The attorney general ultimately determined that it would not be productive to release the report in piecemeal fashion,” Ms. Kupec said. “The attorney general and the special counsel agreed to get the full report out with necessary redactions as expeditiously as possible.”


A subsequent report from the Times goes into more detail about Mueller’s objections:

WASHINGTON — The special counsel, Robert S. Mueller III, pushed Attorney General William P. Barr twice to release more of his investigative findings in late March after Mr. Barr outlined the inquiry’s main conclusions in a letter to Congress, citing a gap between Mr. Barr’s interpretation and Mr. Mueller’s report, according to a letter released on Wednesday.

The letter, from Mr. Mueller, revealed deep concern about how Mr. Barr handled the initial release of the special counsel’s findings.

Mr. Mueller’s office first informed the Justice Department of their concerns on March 25, a day after Mr. Barr released his letter clearing Mr. Trump but declined to release the special counsel’s findings themselves.

“We communicated that concern to the department on the morning of March 25,” Mr. Mueller said in a second letter to Mr. Barr two days later. “There is now public confusion about critical aspects of the results of our investigation.”

Mr. Mueller added, “The summary letter the department sent to Congress and released to the public late in the afternoon of March 24 did not fully capture the context, nature, and substance of this office’s work and conclusions.”

Mr. Mueller asked the Justice Department to release the summaries of his findings. Mr. Barr declined.


While the letter was itself was not initially released when the reports about its existence became public, it has since been released and I have embedded a copy below. The letter itself is only two pages and does not go into specific detail about any objections that Mueller or members of his team may have had to Barr’s initial letter to Congress purporting to summarize the report, but it does make clear that Mueller apparently agreed with the objections that many of the investigators that worked below him had to Barr’s report. Specifically, those objections included the fact that investigators on Mueller’s team believed that the Barr letter did not fairly summarize either the work that the Mueller team had done or the conclusions that they reached in the report. The letter also makes reference to attachments that are apparently related to the investigation and report which are not included with the letter itself. It’s unclear what those addenda consist of exactly but they apparently relate to portions of the Mueller report itself that Mueller and his team felt were not properly summarized by Barr’s letter.

In any case, all of this is in the news at the same time that Barr himself is testifying before the Senate Judiciary Committee. This is one of a series of Capitol Hill hearings that Barr will be seen at over the coming weeks and its fair to say that the Mueller report, Barr’s summary, and the Justice Department’s redaction of the final report will be subjects that the hearing will touch on, especially from Senate Democrats. Additionally, it will likely bring added weight to the ongoing fights between several Congressional Committees and the White House over subpoenas for documents and other information regarding the Russia investigation and other matters, fights that are likely to end up in the Courts if they are not resolved between the two parties involved. Additionally, these revelations would seem to make it more likely that House Democrats will at some point attempt to question Mueller himself and, most likely. some of his top investigators, regarding the investigation, the final report, and the subject matters of the investigation. Some reports have indicated that the Justice Department may move to block any such testimony by Mueller or members of his team, though, so that is yet another court battle we’re likely to see over the coming months. In that regard, it’s worth taking note of recent reports that Mueller wants to testify before Congress but the Administration won’t let him:

Special counsel Robert Mueller is apparently willing to testify to Congress about the findings in his report regarding Russian interference in the 2016 election, House Democrats told The Daily Beast. But Trump’s Department of Justice is apparently holding up the testimony by refusing to set a date, the sources say.

The DOJ did not return The Daily Beast’s request for comment.

This information emerged hours after it was made public that Mueller wrote a letter to Attorney General William Barr in March expressing concerns about Barr’s summary of the report.

In light of that news, House Judiciary Committee Chairman Jerry Nadler made a statement demanding that Mueller be allowed to testify and that the Mueller’s letter be released. Barr is scheduled to testify Wednesday morning.

“The Attorney General has expressed some reluctance to appear before the House Judiciary Committee,” Nadler said. “These reports make it that much more important for him to appear and answer our questions. The Department of Justice has also been reluctant to confirm a date for Special Counsel Mueller to testify.”

Suffice it to say, then, that the release of the Barr’s letter in March and the redacted Mueller report in April were far from the end of the process. The ball is now in Congress’s court and while the Republican-controlled Senate may not be eager to proceed with further investigation the same will not be true of the Democratic-controlled House of Representatives, which appears to be gearing up for a long legal battle with the Administration over the scope of its investigation.

Mueller Letter to Barr by on Scribd 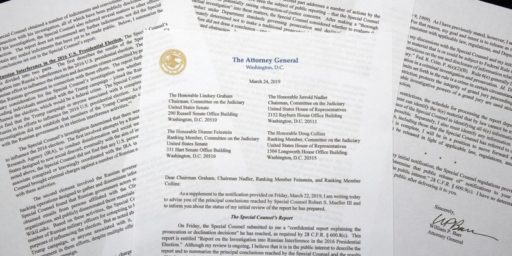