Mystery Solved: What Cubs Game Did Ferris Bueller See On His Day Off? 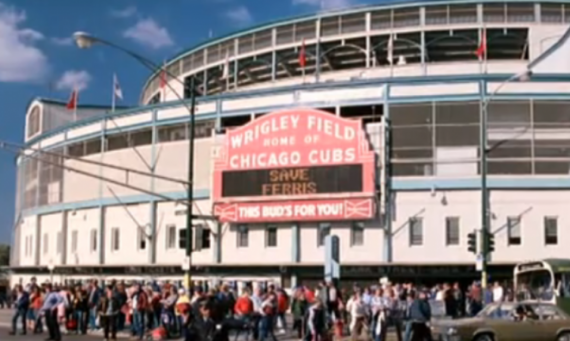 Larry Granillo of Baseball Prospectus decided to see if he could figure out if the Wrigley Field scenes in Ferris Bueller’s Day Off took place at an actual Cubs game:

The scene finally shifts to Wrigley Field, where Ferris and company are sitting near the leftfield foul pole. Off in the distance, we can see the Cubs on the field and one or two baby blue uniforms around the diamond.

It appears obvious now that this is a real ballgame that Ferris is at, not just something recreated for a film crew. The Harry Caray play-by-play and the Braves players on the field are pretty solid evidence of that. So what game, then, are they watching? Did the Cubs win, or did Ferris sing “Danke Schön” as a way to wash away the stink of a Cubs loss?

The movie “Ferris Bueller’s Day Off” was released on June 11, 1986. The ballgame then must have been filmed either real early in the 1986 season or sometime during 1985. Looking at game logs from those seasons, we see that there was no game in 1986 in which Lee Smith (#46) faced the Braves at Wrigley Field. There were four such games in ’85, though Smith left the Braves hitless in one of those. Of the remaining three games, it isn’t hard to find the game we’re looking for.

Since he’s the one who did the legwork, I’ll let you click over to Larry’s post to find out the answer. However, I like the way he closes this:

That leaves, at the most, one hour and forty-five minutes for their trips to the museum, Sears Tower, the lake, and Sloane’s house, while squeezing in two musical numbers during the parade before racing home at 5:55pm. Seems a bit tough to squeeze all of that in for most normal people. But, seeing as Ferris has the magical ability to sound exactly like both a young Wayne Newton and a young John Lennon, I’m willing to believe he could make the schedule work.

And, of course, here’s the relevant clip:

UPDATE (James Joyner): In a follow-up post, we see that the scenes featuring Bueller in the stands were shot at a different game altogether.