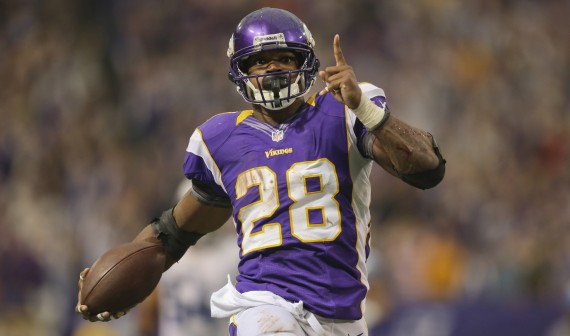 With five months to go before the start of the NFL season, Minnesota Vikings Running Back Adrian Peterson is being reinstated after sitting out most of last year due to charges of child abuse, but it’s unclear where he’ll actually be playing in September:

Minnesota Vikings running back Adrian Peterson will be reinstated on Friday, ending one of the N.F.L.’s more complex and embarrassing suspensions.

The N.F.L. told Peterson on Thursday thathe would be able to rejoin theVikings, but that he was expected to continue taking part in counseling and treatment programs stemming from his arrest for disciplining his 4-year-old son last year with a switch.

While Peterson’s agent has said he wants his client to play elsewhere, the Vikings have said they plan to keep Peterson, who is set to earn a base salary of $12.75 million next season.

Peterson was arrested in Texas in mid-September, and he sat out that week’s game. He said he was just disciplining his son as he had been disciplined.

His arrest came less than a week after the release of a video of Ray Rice, the former Baltimore Ravens running back, punching his future wife.

After the Vikings lost that Sunday, Peterson was reactivated, leading to an uproar from fans and several of the team’s sponsors. The league then took the unusual step of putting Peterson on the commissioner’s exempt list, which allowed him to be paid while he resolved his legal matter.

After he pleaded no contest on Nov. 4 in state court in Montgomery County, Tex., to reckless assault of the child, Peterson expected to be reinstated. Instead, Commissioner Roger Goodell suspended him until at least April 15 for violating the N.F.L.’s personal conduct policy.

The league’s decision prompted questions about whether it deliberately tried to keep Peterson off the field. Peterson asked for an independent arbitrator to hear his appeal, something that Rice had received.

The Arbitrator upheld that decision in a ruling issued in December, but Peterson and the Player’s Association took the matter to Court and, in February, a Federal District Court Judge overturned the arbitrator’s decision. That decision was under appeal, but this decision effectively makes the appeal moot. As for Peterson, he’s still under contract with Minnesota but has expressed a desire to play elsewhere, preferably closer to his home in Texas. Whether that happens at any point in the near future depends on the willingness of the Vikings to release or trade him, and whether or not there are any teams willing to sign him.