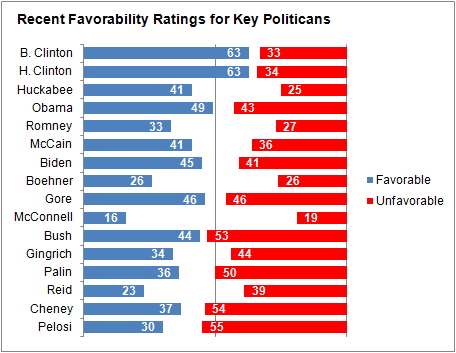 Nate Silver compares favorable/unfavorable numbers and concludes that the soon-to-be-former Speaker of the House is the most unpopular politician in America:

Favorability ratings can sometimes differ quite a bit from polling firm to polling firm — but Ms. Pelosi’s poor numbers in the Quinnipiac poll were no anomaly. A CNN poll last week put her scores at 33 percent favorable against 52 percent unfavorable, and found that about half of Democrats would rather she be replaced. A poll for ABC News and the Washington Post conducted just before the election had Ms. Pelosi’s numbers at 29 percent favorable and 58 percent unfavorable.

In fact, Ms. Pelosi is among the least popular politicians in America today — perhaps the single least popular one that maintains an active political role.

The average score for Ms. Pelosi was 30 percent favorable and 55 percent unfavorable, giving her a net favorability rating of negative-25. This was the worst score of any politician in the study by some margin. Others with substantially net negative scores included Dick Cheney (-17), Harry Reid (-16), Sarah Palin (-14), Newt Gingrich (-10) and George W. Bush (-9; his numbers have improved some), but Ms. Pelosi’s scores were somewhat worse over all.

It’s no wonder that Republicans are so pleased that House Democrats have once again made her the face of the party.