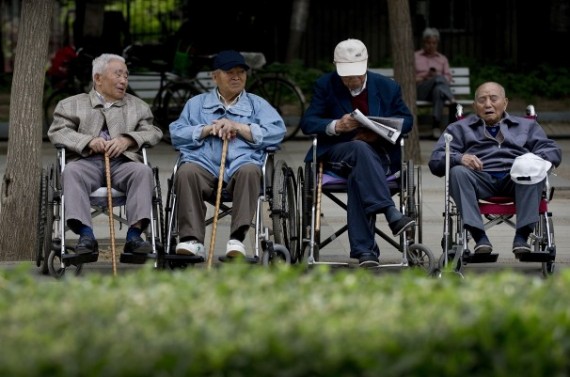 There’s a new law in China that makes it a requirement to visit your parents:

Hong Kong (CNN) – Lola Wang, a 28-year-old marketing officer in Shanghai, makes a six-hour trip to Shandong to see her parents twice a year — once during the Lunar New Year and again during the National Day holiday in October.

“I feel like I should visit my parents more but having a job in the financial industry means I have to work long hours and sacrifice some of my personal time for work,” Wang, an only child, tells CNN.

Wang’s dilemma is faced by many young people in China, where a one-child policy and three decades of economic reforms have accelerated the decline of the traditional extended family.

It’s also a matter of concern for China’s new leaders as they grapple with the burden of supporting the growing number of elderly people.

A new national law introduced this week requires the offspring of parents older than 60 to visit their parents “frequently” and make sure their financial and spiritual needs are met.

“People are accusing young people of not visiting their parents enough,” says Wang, adding she agrees with the aims of the law.

“Admittedly, some of them use their career and long working hours as an excuse. My problems are that I do care about my parents, but I have little vacation and my parents live far away.”

The law was apparently prompted by several reports of neglect in a society were taking care of older relatives had long been a duty taken on by a large extended family, but that extended family is fading away thanks to the one-child policy:

The “Law of Protection of Rights and Interests of the Aged” was amended by China’s legislature in December after a spate of reports about elderly parents neglected by their children.

In one particularly horrific case in Jiangsu province, a local television station reported that a farmer had kept his 100-year-old mother in a pigsty with a 440lb sow.

Chen Shoutian told the station his mother had been happy to live there: “She wants to stay here because she feels it is convenient,” he said.

A modest pension and social welfare system, particularly in rural areas, means elderly people are usually dependent on their children for support.

Although respect for the elderly is still deeply engrained in Chinese society, traditional values like filial piety have been weakened by the country’s rush to modernity.

“The traditional family support system is eroding for many reasons and I think the government would like to slow this process down,” said Albert Park, the director of the Emerging Markets Institute at the Hong Kong University of Science and Technology.

The legislation also allows for the elderly to sue their children but does not specify the process or what penalties they might face.

Of course, no law is going to force people to choose to care about, and for, their parents in their old age. However, there are elements of this law that actually exist in the United States. Some states do have laws that allow elderly parents who cannot support themselves to seek civil judgments against their children for maintenance or support, although such lawsuits are exceedingly rare and no doubt embarrassing for parents to have to bring in Court.  I don’t know that China’s “visit your parents” is something that will work, and I certainly wouldn’t support such a law here in the United States, but it’s fairly clear that it is a reflections that are happening at the roots of Chinese society thanks to both the One-Child policy and the nation’s headlong rush to modernity.