Last week, Mitt Romney named Richard Grenell as his new foreign policy spokesperson. At the time, the most noteworthy thing about the appointment was the fact that Grenell is openly gay, which led some social conservatives to denounce the appointment. It also turns out, though, that Grennell has a history of saying some rather unfortunate things online that he or someone else has been feverishly trying to erase:

NEW YORK — Richard Grenell, a former Bush administration official who joined the Romney campaign Thursday as national security and foreign policy spokesman, appears to have deleted more than 800 of his past tweets following scrutiny over numerous swipes aimed at the media, prominent Democratic women and the Gingriches. Grenell also apparently took down his personal site, which featured writing on politics, foreign affairs and the media.

On Friday afternoon, Grenell still featured a link to his personal site (http://www.richardgrenell.com) on his Twitter profile, which then showed that he had tweeted 7,577 times, according to a screenshot taken Friday by The Huffington Post. By Sunday morning, Grenell’s Twitter feed only listed 6,759 tweets and his personal site is no longer available. (Some examples of past writing have been archived on the Internet and can be found here.)

In the Twitter-fueled 2012 election, it’s not surprising that reporters quickly began digging through Grenell’s Twitter feed, even before he got a chance to scrub out a number of impolitic and sexist comments.

ThinkProgress noted Grenell’s tendency to make cutting remarks about the appearances of prominent women in media and politics, including his tweet advising MSNBC host Rachel Maddow “to take a breath and put on a necklace,” and another suggesting she resembled a Justin Bieber.

In another tweet, Grenell wrote that “Hillary is starting to look liek Madeline [sic] Albright.” He discussed First Lady Michelle Obama working out and “sweating on the East Room carpet.” He also asked whether Callista Gingrich’s “hair snaps on,” and on another occasion, commented how Gingrich’s third wife “stands there like she is wife #1.” Politico flagged more examples and noted Grenell’s “old pastime” of “ridiculing the Gingriches.”

When contacted about Romney’s hiring of Grenell and his removal of online writing, a campaign spokesperson referred The Huffington Post to a response Grenell gave to Politico. “My tweets were written to be tongue-in-cheek and humorous but I can now see how they can also be hurtful,” Grenell said. “I didn’t mean them that way and will remove them from twitter. I apologize for any hurt they caused.”

The apology is what it is, but deleting tweets and taking down a website strike me as pretty silly. Moreover, while it’s true that Twitter is often a very tongue-in-cheek in environment, one would think that someone in Grenell’s position would know better than to behave like a college frat boy on a social media network. Doesn’t everyone know that you can’t ever really erase anything from the Internet?

This may or may not be a big deal, but as the old saying goes sometimes the coverup is worse than the crime and now, it strikes me, Grenell is just going to leave people wondering what he didn’t want them to see. 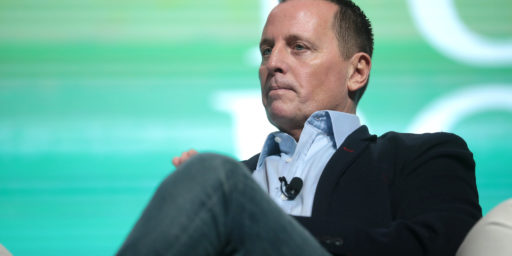