A New York Judge has upheld an injunction against Draft Kings and Fan Duel. It's probably correct under New York law, but that just means the law needs to be changed. 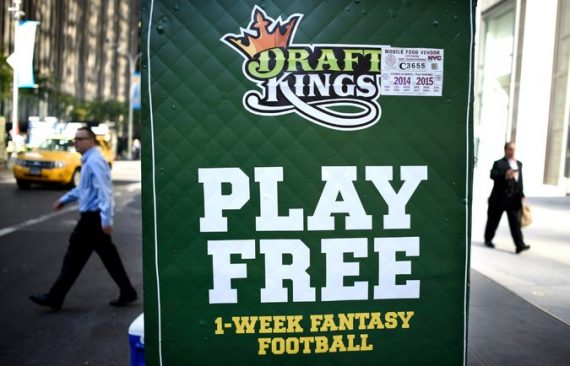 One month after New York’s Attorney General issued an order banning fantasy sports websites that involve money awards from operating in New York State, a New York State Judge has upheld the order and effectively shut down these businesses in one of the nation’s most populous states:

“The balancing of the equities are in favor of the N.Y.A.G. and the State of New York due to their interest in protecting the public, particularly those with gambling addictions,” wrote Justice Manuel Mendez of state Supreme Court.

Rather than betting on games directly, players pay an entry fee and select teams of players. McGee said this was really just another form of betting.

“If someone set up a website that allowed people to make millions of bets on the outcome of spelling bees, that would be gambling,” McGee said.

John Kiernan, representing FanDuel, argued that daily fantasy sports was not gambling at all.

“What is skill?” he said. “It’s when through effort and aptitude you increase your probabilities of success.”

David Boies, representing DraftKings, pointed to statistical analysis that a handful of players win most of the money.

“If most people lose money and the same people continue to win repeatedly, that is absolute proof that this is a game of skill and not of chance,” he said.

Fantasy sports companies have also contended that their games are legally sanctioned by a 2006 federal law that exempt fantasy sports from a prohibition against processing online financial wagering.

The ruling was a major setback in the sites’ largest market — with more than 1.2 million customers, New York accounts for more than 12 percent of players, according to Eilers Research. Mr. Schneiderman has expanded his investigation to include Yahoo, which is a relatively small player in the market.

FanDuel has an average of 52.1 million monthly visits, while DraftKings stands at 30.3 million, according to Joel Zand of the Internet analysis site SimilarWeb.

Given the relevant state law, it seems clear that that Judge Mendez’s ruling was the correct one. Like most states in the nation, and also thanks to a Federal law that bars sports betting in all but a handful of states, sports betting, or indeed any type of gambling that is not operated by or legally sanctioned by the state, is illegal in the State of New York. There are exceptions in both the State and Federal laws for ‘games of skill’ that require the application of some kind of skill rather than pure chance, but Judge Mendez found in his ruling that this distinction does not apply under the facts that were presented. He further found that the argument that an exemption in Federal Law for fantasy sports does not apply due to the fact that the Federal Law specifically permits state gambling laws to define sports gambling in a way that would include businesses such as those that Draft Kings and Fan Duel operation, in which participants pay fees as high as $10,000 to participate on a daily basis in fantasy leagues and then potentially win money depending on the outcome based on scores calculated based on player performance, which is a factor outside the control of the participant and thus, Mendez ruled, something that makes such games a ‘game of chance’ as New York law defines it. Since I’m not sufficiently well versed in New York law to comment, I’m not going to argue that Mendez’s conclusions or statements of New York law are incorrect and, in any case, both Defendants in this case are appealing this matter so any errors in this regard would be addressed at that point.

On a policy level, it’s never been clear to me how the games run by sites like Draft Kings and Fan Duel are really any different from ordinary sports gambling, or even how they have been able to operate around the law for this long a period of time. Now that New York State has succeeded in it’s efforts to force the companies to cease operations, one suspects that other states will quickly follow, although the oddities of state law in other jurisdiction may mean that it would take longer for them to act than it did under New York law. In that respect, it would simply be a matter of treating these two companies the same way a sports betting operation would be treated under the law, and if the law applies equally to both kinds of operations there doesn’t seem to be any reason why it shouldn’t be applied equally.

The problem here, at least from my point of view, is that the law shouldn’t really be speaking about this at all, at least not to the extent of barring it outright. Presently, sports betting is effectively outlawed nationwide except for a handful of states where it was legal before the relevant law, called the Professional and Amateur Sports Protection Act (PASPA) was passed by Congress. In reality, though, the only state where there is presently legal sports betting is Nevada, where it is a multi-billion dollars business that attracts wagers not only for major sporting events such as the Super Bowl and major boxing tournaments, but also on a daily basis for Major League Baseball, N.F.L., N.B.A., and N.H.L. games. As the State of New Jersey, which has attempted to legalize sports betting several times in recent years in an effort to revitalize the gambling business in Atlantic City, this effectively bars any state from trying to change its laws to legalize sports betting. The process started in 2012 when Governor Christie signed a bill into law meant to implement a 2011 voter referendum that authorized sports betting at the Atlantic City casinos and select horse racing venues. That law was quickly challenged in Federal Court by all the major sports leagues along with the N.C.A.A. The lawsuit argued that the state’s effort was not authorized by Federal law. The Federal Judge hearing that case ended up ruling in favor of the leagues, and the Third Circuit Court of Appeals upheld that ruling. Last year, the legislature in Trenton tried a new tactic designed to get around Federal Law in that, instead of authorizing sports betting in the Garden State, it merely repealed the laws barring it while setting up a regulatory scheme to monitor a pilot project at one of the state’s racetracks. That law too was quickly challenged in Federal Court by the same group of sports leagues and, after first issuing a temporary stay, the Judge issued an injunction blocking sports betting in the state.

There is a a strong argument that the PASPA itself is unconstitutional because it is not authorized by the Commerce Clause and conflicts with an individual state’s rights to establish its own laws on an issue such as this under the Tenth Amendment. Beyond that point, though, it occurs to me that whether one is talking about sports betting or fantasy leagues such as Draft Kings or Fan Duel, that states ought to have the right to decide for themselves whether the practice should be legal and that individuals ought to have the right to decide whether or not to participate. As it stands, every state in the country runs multiple versions of games of chance that are as random and subject to concerns about addiction to gambling as those businesses are, so the argument that the state is acting to “protect” consumer seems rather absurd. Add into this the fact that one can travel to Nevada and bet on sports as much as one wants, and the arguments against allowing states and individuals to make their own choices here are pretty much nonsense. Absent changes in Federal law, of course, it’s unlikely that we’ll see sports betting anywhere outside of Las Vegas anytime soon, and casino operators such as Sheldon Adelson and others appear to be very adept at using campaign contributions to the “right” Members of the House and Senate to ensure that their protections under Federal Law remain intact. As with other special interest legislation, though, that hardly makes it right.

Update: ESPN is reporting that an appeals court, which would presumably be the Appellate Division of the Superior Court of New York, the intermediate appellate court in New York State, has granted Draft Kings and Fan Duel an emergency stay blocking enforcement of Judge Mendez’s order pending appeal.