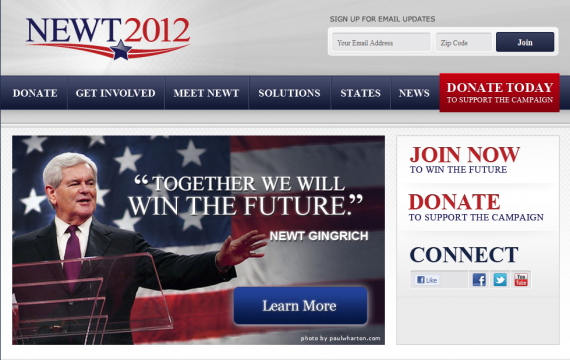 Starting with a Twitter announcement, and a video, former House Speaker Newt Gingrich has informed the world that he’s running for President:

Former House Speaker Newt Gingrich announced the launch of a presidential campaign for the next election cycle on Wednesday.

Gingrich wrote in a tweet, “Today I am announcing my candidacy for President of the United States.” Along with the message, the newly-minted Republican contender included a link to video of his campaign announcement. The link, however, appeared to be broken at the time it was sent.

“I’m announcing my candidacy for president of the United States because I believe we can return America to hope and opportunity, to full employment, to real security, to an American energy program, to a balanced budget,” Gingrich says in the video dispatched to supporters. “I worked with President Ronald Reagan in a very difficult period. We got jobs created again. Americans proud of America. And the Soviet Union disappeared.”

While recent polls haven’t shown Gingrich to be running at the front of the pack of likely Republican presidential contenders, the former speaker is perhaps one of the better known conservative names eyeing the GOP nomination to take on President Barack Obama in 2012.

For Newt Gingrich, who will announce his candidacy Wednesday, the road to the Republican nomination runs through Iowa.

Unlike some of his likely rivals, who are looking to downplay or even flat out skip some states on the primary calendar, Gingrich is headed down a different path, a more traditional route in which he will compete aggressively across the early-state map and among all blocs within the party.

That most likely means participating in this summer’s Iowa GOP straw poll in Ames, traditional retail politicking in New Hampshire and making an all-out effort in South Carolina. But Gingrich officials say their effort will be bigger than any one state and look dramatically different than any other campaign.

Since Mitt Romney and Jon Huntsman can spend their own millions on their campaigns and remain on the airwaves even after sustaining early losses, advisers to the former House speaker don’t believe it’s possible to lock up the nomination by winning one or even two initial contests. So Gingrich isn’t pinning his hopes on any single state, believing instead that, for those who can’t fund their own campaigns, the drawn-out contest will require a prudent use of resources spread across the board. (See also: Jon Huntsman to storm New Hampshire)

“You’ve got to compete everywhere and appeal to Republican primary voters across the board — you can’t cherry-pick places [where] you think you can win,” said Dave Carney, a New Hampshire-based Gingrich strategist and longtime GOP consultant, predicting a “long, hard-fought battle,” thanks to the prospective self-funders.

“Even if their ideas aren’t working and they’re not getting any traction, they can stay in the race,” he said.

Really? To be honest I haven’t met a single Republican who is looking forward to Gingrich entering the race. He’s got a ton of baggage, he’s been out of  office since 1998, and he’s spent much of the last 13 years backing proposals that many conservatives now find anathema, such as George Bush’s No Child Left Behind and Medicare Part D. Still, Gingrich’s skills as a debate can’t be denied and when other candidates falter who knows what he’ll be able to to do. It will, at the least, be interesting to watch.

Meanwhile, look above at the new front page at Newt.org. Notice a familiar slogan? I wonder how many Republicans will like the idea that he’s taken a slogan that the President has been using for the past several months.