No, the Trump White House Isn’t Having a Job Fair

A POLITICO story pushes a plausible narrative with an example that's almost certainly not evidence of it.

The White House – which has been having trouble filling positions as it bleeds staffers – is now trying to find recruits at a conservative job fair on the Hill.

“Interested in a job at the White House?” is the subject line of an email that was blasted out widely to Republicans on the Hill late Wednesday advertising the upcoming event.

It promises that “representatives from across the Trump administration will be there to meet job seekers of every experience level.” A person familiar with the planning said that Johnny DeStefano, who oversees the White House personnel department, and Sean Doocey, a deputy assistant to the president for presidential personnel, are expected to be on hand, among other officials from the West Wing.

The flyer lists positions open in the White House as well as a handful of government agencies including Defense, Interior, Commerce, Homeland Security, Health & Human Services, NASA, Energy, and Treasury.

The “Executive Branch Job Fair” is scheduled for Friday afternoon in the Dirksen Senate Office Building, according to a flyer attached to the email.

“There are positions currently open and we are looking for the most competent conservatives to recommend,” the flyer, shared with POLITICO, reads.

It’s well-documented that the Trump administration has had an unusually difficult time filling high-level slots. The #NeverTrump movement, which is especially concentrated among Republican foreign policy and national security professionals, has left slim pickings for Defense, State, and Intelligence Community posts in particular. Further, the sheer chaos and turnover has left some who might otherwise be willing to work for this President fearful of reputational hits and job insecurity.

So, it’s plausible indeed that the White House is resorting to advertising. But that’s not what’s happening here.

The fair is being hosted by the Conservative Partnership Institute, an organization founded by former Heritage Foundation president Jim DeMint last year.

The goal of the upcoming Trump job fair, according to a person familiar with the planning, is to specifically target serious conservatives to fill slots, from junior positions all the way up to assistant secretary-level positions.

“CPI’s mission is to support conservatives in Washington and we are excited about giving hundreds of qualified, experienced conservatives an opportunity to meet with Trump administration officials and learn about career opportunities,” Rachel Bovard, senior policy director at Conservative Partnership said in an email.

A White House spokesman did not immediately respond to a request for comment.

A job fair is seen as an unusual step for a White House to take. Typically jobs in the executive branch are coveted career-making opportunities.

While I suppose it’s possible that the White House reached out to CPI to host this fair, that’s almost certainly not what’s happening here. Much more likely, a brand new conservative policy shop is trying to assemble a roster of talent and pitch it to the White House and senior Republican appointees in the administration (and, I’d guess, Republican Representatives and Senators) in order to make a name for itself. Indeed, that’s what the flyer itself says! 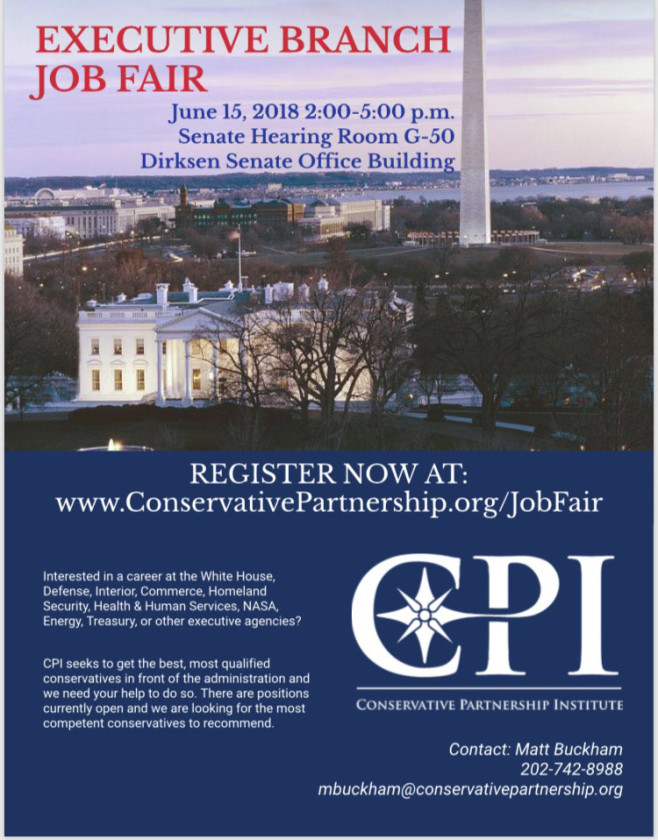 A former Obama administration official said it would have been unheard of in the previous administration, and that West Wing jobs were rarely even listed on UsaJobs.Gov, the official job search site for the federal government. But the executive branch of the Obama administration did sometimes host events on campuses of historically black colleges and universities to meet potential candidates from underrepresented groups, the former official added.

The Trump White House, however, has had difficulty bringing new people in as staffers have resigned amid ongoing chaos and a crackdown on security clearances – or, more recently, been fired as part of a purge of people accused of leaking information to reporters.

The departures have hollowed out the ranks of lower-level staffers, with dozens departing from various policy offices as well as the press and communications shops.

Perhaps most prominently, the position of communications director has sat vacant since Hope Hicks departed last March – but that post is not expected to be filled at the Friday job fair.

Again, there’s zero evidence that the Trump White House is advertising jobs. And I’ll bet my house and the contents of my bank account that Hicks’ replacement will not be found at this job fair.

There are a lot of things about this administration that depart from Washington norms. Ideological organizations trying to ingratiate themselves with those in power by creating a roster of young talent for hire, however, is not one of them. That’s the way the town has worked for decades.