Now, I ask you, does this man look like a Nobel Prize chemist? 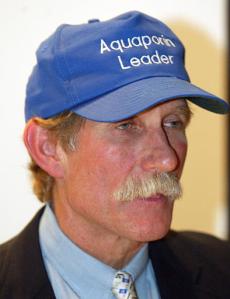 At any rate, he’s worried about academic freedom.

One of the two Americans who won this year’s Nobel prize for chemistry said on Wednesday he may use some of his prize money to help defend academic freedoms against restrictions imposed on scientists as part of the U.S. war on terrorism.

“There are some social issues we’re considering, including scientists who are being persecuted around the world and in the United States,” Dr. Peter Agre of the Johns Hopkins University School of Medicine, told Reuters in a telephone interview.

Agre and his wife Mary have four children, three in college, and he said he will likely spend much of his winnings on education costs.

But he underscored the importance of supporting social issues involving science, specifically citing the criminal case of Texas plague expert Thomas Butler who has been charged by federal authorities after he reported he lost some plague samples. Prosecutors said he illegally transported samples from Tanzania and lied to the FBI about how he disposed of them.

The case, born out of national security restrictions imposed on scientists after the Sept. 11, 2001, attacks, has already brought a number of prominent scientists to Butler’s defense saying he did nothing different than other scientists. Butler has pleaded not guilty to the criminal charges.

“He was arrested and taken away in chains … This is something that’s bothered many of us,” Agre said.