Nobody For Virginia Governor

The Richmond Times-Dispatch has endorsed "none of the above" for governor of Virginia. 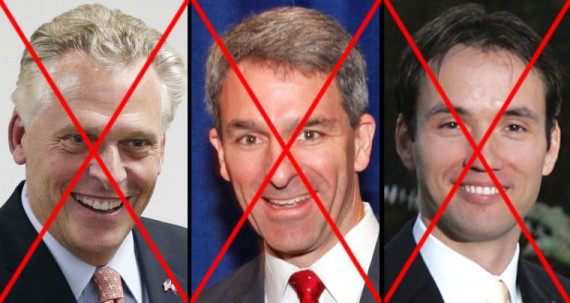 The Richmond Times-Dispatch has endorsed “none of the above” for governor of Virginia.

The major-party candidates have earned the citizenry’s derision. The third-party alternative has run a more exemplary race yet does not qualify as a suitable option. We cannot in good conscience endorse a candidate for governor.

This does not gladden us. Circumstance has brought us to this pass. This marks, we believe, the first time in modern Virginia that The Times-Dispatch has not endorsed a gubernatorial nominee.

Reading through the editorial, however, it seems that they find Republican Ken Cuccinelli more repugnant than Democrat Terry McAuliffe:

All three support the Second Amendment, although McAuliffe appears more amenable to restrictions on the right to bear arms. As governor, none would attempt to remove guns from the hands of the law-abiding.

On social issues such as abortion and homosexual rights, Cuccinelli not only takes stands we find objectionable but pursues his divisive agenda with a stridency that was unbecoming in an attorney general and would be unbecoming in a governor. We do not support abortion for any reason at any time and have embraced bans on late-term abortions, for instance; we remain troubled by Cuccinelli’s approach to personhood and to regulations on clinics. Questions involving abortion will be resolved not by government policy but by transformation of the human heart.

Cuccinelli’s hostility to marriage equality offends. The rights applying to human beings by definition apply to homosexuals. The concerns relating to Cuccinelli do not relate to McAuliffe and Sarvis.

In any case, the challenges confronting Virginia’s next governor will concern the economy and related matters.

We disagree with Cuccinelli’s opposition to Gov. Bob McDonnell’s transportation package. McAuliffe scores points here. The Democrat stumbles when he proposes major spending hikes, which he claims can be financed by the federal dollars the state would receive by expanding Medicaid. He offers an easy answer to a tough question.

His inclinations do not conform to Virginia’s history of fiscal restraint. Regarding uranium mining, the three wannabes opt to lead from behind.

On energy generally, McAuliffe has spun like a top and now supports items he once opposed, such as the exploration for energy sources off Virginia’s shores. Cuccinelli and Sarvis did not need electoral considerations to persuade them to do the right thing. McAuliffe’s endorsement of the EPA’s new regulations on coal-fired power plants counters sentiment in Virginia’s coalfields, nevertheless.

All the candidates favor top-quality education, imagine that. Their platforms conform to nostrums offered by their respective philosophical inclinations. We see little to repudiate out of hand; little thrills us, either. Education reform is a tough slog and must coincide with a comprehensive assault on poverty and family disintegration.

Experience makes a difference, and Cuccinelli, McAuliffe and Sarvis fall short. Cuccinelli may have performed the legal tasks of his office with professional competence, but his focus raises questions about his gubernatorial ambitions.As AG, he stressed things he did not have to, and, if he stayed in character, he would do the same as governor.

McAuliffe styles himself a businessman and entrepreneur. He inhabits the crossroads where the public and private sectors intersect and sometimes collide. His experience with GreenTech does not generate confidence. He located the plant in Mississippi, which is not known for its social enlightenment. The company has not lived up to expectations. If it eventually does, no credit will accrue to McAuliffe, for he has, he says, stepped away from it. He is not the reincarnation of Henry Ford.His ignorance of state government is laughable and makes Rick Perry, the notorious governor of Texas, look like a Founding Father.

Sarvis has no experience applicable to the governorship, period. Being a fine fellow is not enough. The encouraging news is that an excellent and loyal state workforce will ensure that Virginia will win high marks for efficiency and management, regardless of the person elected to lead the commonwealth.

And so it has come to this. Voters do not expect perfection in candidates. No one is always right. Hubris claims many at all points along the political spectrum.

In the past, The Times-Dispatch has endorsed candidates with varying degrees of enthusiasm. We find it impossible to endorse any of the 2013 candidates with even minimal zeal.

Elections make voters complicit in the government they receive. If we would not urge a family member to vote this way or that, then we have no business recommending Cuccinelli, McAuliffe or Sarvis to our readers.

Last go-round, I voted without enthusiasm for Republican Bob McDonnell, a religious zealot albeit one much more moderate in style than Cuccinelli, over Democrat Creigh Deeds, a political nobody who won the nomination by default when McAuliffe and Brian Moran turned off the electorate. McDonnell didn’t do any real damage in office, other than embarrassing himself by exploiting loopholes in the Commonwealth’s ethics laws to line his family’s pockets.

I can’t in good conscience vote for Cuccinelli. While I don’t think he’d have much success in getting his retrograde social agenda through the legislature, his views on even ordinary matters of state, like transportation and the relationship with neighboring DC, would make him a disaster as chief executive. McAuliffe  is more sensible on those issues and would get my vote if I could countenance his character at all. I cannot.

That leaves me in the position of the Times-Dispatch and most of the voters of the Commonwealth: one of those men is going to be governor, whether we like it or not. The paper makes a tacit argument for a Libertarian protest vote:

Libertarian Robert Sarvis has neither embarrassed himself nor insulted the commonwealth. He lacks the experience the job demands, however.

Moreover, while The Times-Dispatch finds considerable merit in the libertarian ethos, the libertarian ideology is a luxury afforded by a political, economic and social climate that, despite the nation’s commitment to liberty, was not created by libertarian doctrine. We fear Sarvis would be in over his head.

Still, a vote for him would not be wasted but would serve notice to Republicans and Democrats that the electorate rejects their surly antics. Citizens whose votes reflect their ideals do not throw away their ballots.

But that’s only true if the election results are not in doubt. Otherwise, not choosing between the two candidates who can plausibly win is to allow others to choose for you.

If it were up to me to choose the governor who would do the least damage to the Commonwealth over the next four years, I’d have to go with McAuliffe, repugnant as I find him. Thankfully, it looks like I’ll be spared being put in that position, as the combination of an effective ad campaign highlighting Cuccinelli’s outrageous positions on women’s rights and his alignment with the Ted Cruz wing of the GOP during a government shutdown that Virginia quite hard will make this election a walkaway.

Because I don’t closely follow local politics and don’t have strong views on any of the down-ballot candidates, I’ll likely just sit this one out. If I get motivated in the next few days to vote for any of those races, I’ll likely cast a protest vote for Sarvis.

First of all, this strikes me as a bigger loss for Cuccinelli than McAuliffe in that the Times-Dispatch has long been a traditionally conservative-leaning newspaper that endorses Republican candidates, especially at the state level. They endorsed McDonnell in 2009 and endorsed former Governor George Allen over Tim Kaine in last year’s Senate race. The fact that they couldn’t bring themselves to endorse Cuccinelli is, some would argue, a reflection of the rift that has developed between many in the top tier of the party and the base over the 2013 ticket. Indeed, another newspaper endorsed Lt. Governor Bill Bolling, once Cuccinelli’s rival for the GOP nomination this year, and he isn’t even on the ballot for Governor.

Second, Virginia political blogger Vivian Paige brings my attention to this excerpt from the RTD editorial:

It doesn’t appear that the paper has spoken on the marriage issue in the editorial pages in recent years, but it looks to me like the most conservative paper in Virginia just endorsed same-sex marriage.