Some progress on easing tensions between North and South Korea. 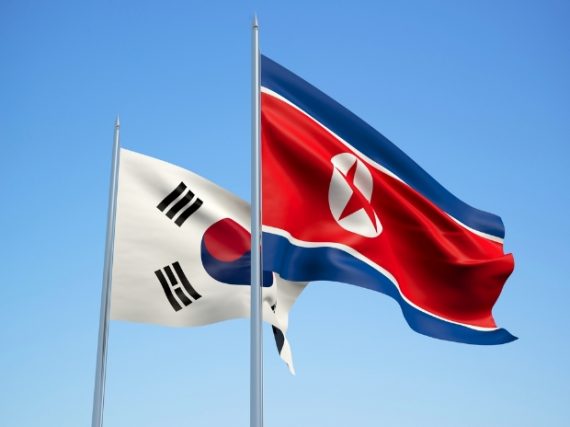 After the first day of face-to-face talks between delegations from North and South Korea in several years, the two countries have come to an agreement that will have the DPRK send a delegation to the Winter Olympics next month:

In talks held at the border village of Panmunjom, North Korean negotiators quickly accepted South Korea’s request to send a large delegation to the Winter Olympics in Pyeongchang, South Korea, next month, according to South Korean news reports. In addition to the athletes, the North will send a cheering squad and a performance-art troupe.

The event will be the first time North Korea has participated in the Winter Games in eight years. The country has competed in every Summer Olympics since 1972, except the 1984 Games in Los Angeles and the 1988 Games in Seoul, both of which it boycotted.

In fact, the North’s attendance will be a historic development in inter-Korean sports exchanges.

The North not only shunned the 1988 Seoul Olympics but also tried to disrupt them after talks on co-hosting them fell apart. Its agents planted a bomb on a Korean Air passenger plane in 1987 in a terrorist attack that the South said was aimed at sabotaging the 1988 Olympics. All 115 people on board were killed.

It was not immediately clear whether North Korea attached any conditions to its decision to attend.

The agreement was reached in talks between Cho Myoung-gyon, the South Korean cabinet minister in charge of relations with the North, and his North Korean counterpart, Ri Son-kwon.

The development came after Mr. Ri opened the talks by throwing a curveball: He suggested that the talks be open to reporters. That way, he said, the people in both Koreas would be able to witness the North’s sincerity about improving ties.

But, wary of North Korea’s mastery of propaganda, Mr. Cho agreed to open only parts of the talks to pool reporters.

The closed-circuit television footage of the talks at Panmunjom, in the middle of the world’s most dangerous border, was relayed in real time to Seoul, where officials scrutinized North Korean tactics. The North transmitted the audio of the meeting to its capital, Pyongyang.

While the focus of Tuesday’s talks was the Olympics, South Korean officials were also expected to explore whether North Korea is interested in talks with the United States to ease tensions over its nuclear arms programs.

In his New Year’s Day speech, Kim Jong-un, the leader of North Korea, proposed holding the dialogue with South Korea to discuss his country’s participation in the Pyeongchang Games. In the same speech, he also claimed to have acquired a nuclear deterrent, including intercontinental ballistic missiles that he said he could unleash on the United States with his “nuclear button.”

Some analysts said Mr. Kim was hoping to use his country’s self-proclaimed status as a nuclear weapons state as leverage to win concessions from Washington, particularly the easing of increasingly crippling sanctions. President Trump and Secretary of State Rex W. Tillerson said that Mr. Kim’s decision to start dialogue with South Korea was a sign that their campaign to isolate the North was working.

The talks at Panmunjom provide an opportunity to gauge whether North Korea is willing to moderate its behavior after a year of provocative nuclear and missile tests that have raised fears of all-out war on the Korean Peninsula.

The only North Korean athletes to qualify for the Pyeongchang Games so far are a pairs figure skating team. But North Korea missed an Oct. 31 deadline to accept invitations from the I.O.C. and South Korea to join the Games. The I.O.C. has said it remains flexible, willing to consider wild-card entries for North Korean athletes.

In Tuesday’s talks, South Korea also suggested that the two Korean teams march together during the opening ceremony of the Olympics, Chun Hae-sung, the vice minister of unification, told reporters in Panmunjom after the morning’s negotiations.

The South also proposed that the two countries revive their program of temporarily reuniting elderly people who have not seen their cross-border relatives since the Korean War unofficially ended in 1953. Such reunions could take place in time for lunar New Year’s Day on Feb. 16, a traditional season for family reunions in Korea, the South Korean negotiators told their North Korean counterparts.

“We told them that both sides should cooperate, based on mutual respect, and end any acts of raising tensions on the Korean Peninsula,” Mr. Chun said. “We also called for the resumption of dialogue on denuclearization and peace-building.” The North’s response was not immediately available. The negotiations continued in the afternoon.

Clearly, this agreement to allow North Koreans to participate in the Olympics isn’t going to resolve all of the issues between North and South Korea, nor does it even come close to addressing the issues raised by North Korea’s nuclear and ballistic missile programs, its militaristic and bombastic rhetoric aimed at both its neighbors in South Korea and Japan and at the United States, and the massive military presence it has just across the Demilitarized Zone that could cause extensive damage all on its own. At the very least, though, it does seem to put to rest any fears that Kim Jong-Un could seek to use the attention that the Olympics will bring to the Korean peninsula for the better part of next month. Additionally, it seems to suggest that there’s at least some opportunity for the two sides to cool tensions on the peninsula down somewhat from the fever-pitch that they’ve been at for the better part of the past year. For that reason alone, this is arguably a good step forward, albeit a small one.

In addition to agreeing to an Olympic delegation, the two Koreas have apparently also agreed on a number of other matters that seem likely to ease tensions at least to some extent. The military hotline between the two countries that was shut down by the DPRK several years back when tensions began to rise will be kept open indefinitely, for example. Additionally, the parties agreed to hold further talks in the future to discuss other issues such as resuming the reunification program that allowed families that were left divided since the armistice that ended the Korean War, a program that was also ended several years ago amid rising tensions. Finally, the parties agreed to further discussions on the details of the upcoming Olympic visit, including perhaps most importantly the route that any North Korean delegation would take to get to Pyeongchang, where the games are being held.

All of this comes, of course, in the wake of Kim Jong-Un’s New Year’s Day speech in which he appeared to extend an olive branch to the south while at the same time maintaining the same strong militaristic rhetoric toward the United States. To some extent, it appears that at least part of what’s motivating him in part is a desire to draw South Korea away from the United States at least to some extent. As I noted in my post last week, the relatively new President of South Korea, Moon Jae-In, campaigned in part on a platform that included the idea of trying to reduce tensions with the north. To some extent, he was at least initially diverted from that path due in no small part to North Korea’s own rhetoric and actions, such as its most recent nuclear and ballistic missile tests. Additionally, it’s clear that the Republic of Korea isn’t going to drift away from the United States. Nonetheless, given the rhetoric being exchanged between the DPRK and the United States, the fact that the President of the United States has been boasting about the size of his “nuclear button,” and reports that the United States is considering an unprovoked first-strike against the North, extending an olive branch to the south is a pretty smart strategy on Kim Jong-Un’s part.